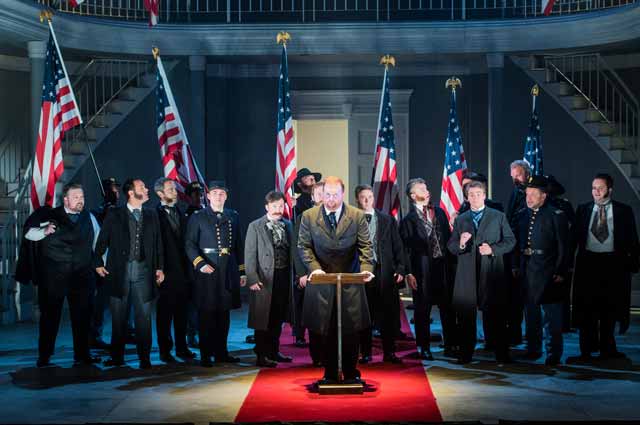 The king is dead! But does anybody care? Rulers are supposed to have what Shakespeare calls ‘The king-becoming graces,’ but Stephen Medcalf’s production of Verdi’s 1859 version of the murder of Gustav III of Sweden, set in Boston and substituting the Governor for the King, gives us a rather passive, self-loving ‘hero’ – it’s quite difficult to see how such a character could have commanded love and respect as well as hatred. That’s no criticism of Vincenzo Costanzo’s amiable Riccardo, who gives the arias his all despite a somewhat constrained sound at the top of the stave – it reflects the overall direction of a production which is well staged but not strong on personenregie.

Claire Rutter is an experienced Verdi soprano, and she gave a typically sympathetic, persuasive performance as Amelia, her warm, cultivated voice never grating on the ear. She was unflatteringly costumed, first in a sort of ‘Frumpy Pioneer Wife’ dress and then in a scarlet number more suitable for a saloon bar temptress than the wife of a senior member of the court, but as usual she rose above it. Her husband, Riccardo’s eventual murderer, was stylishly sung by Roland Wood, whose richly coloured voice is ideal for these great Verdi baritone roles: ‘Eri tu’ was definitely the high point of the evening. 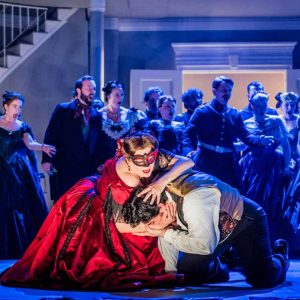 One usually measures an Oscar by how irritating s/he is, and Tereza Gevorgyan was extremely so – but that was down to the production again, seeming to see the character as an extra from ‘Annie Get Your Gun.’ Gevorgyan’s singing, however, was at another level, displaying clarity of tone and confident phrasing. Elisabetta Fiorillo’s fruity, opulent contralto was not at its best on this occasion, but she played the ambivalent sorceress with great commitment. Samuel and Tom were in the more than capable hands of Matthew Buswell and Matthew Stiff, and what a thoroughly nasty pair they were.

The Chorus was outstanding, whether impersonating Bostonian officials or half-mad acolytes, with elegantly musical singing and confident projection. The English National Opera Orchestra played superbly for Gianluca Marciano; we’ve praised his Verdi in the past, and on this occasion he lived up to expectations, despite some rather sluggish tempos early on.

The set seems to have been based on a sort of replica of the room where the Declaration of Independence was signed (in Philadelphia) making use (perhaps a bit too much) of the same balcony set-up as last season’s Walküre. There’s a great deal of flag-waving and lectern-grasping (Riccardo even makes his dying statement from one) and the stage groupings do go some way towards suggesting the political shenanigans afoot. The Ball scene was expertly handled, the dancing as eye-pleasing as if it had been Eugene Onegin, and the sense of pending disaster well suggested.

The ‘Theatre in the Woods’ is an idyllic venue with superb acoustics, and although this season has not been as ‘starry’ as that of last year, it’s still a must-visit of the Summer Opera season. Dare one hope for some Mozart and Handel in future years?