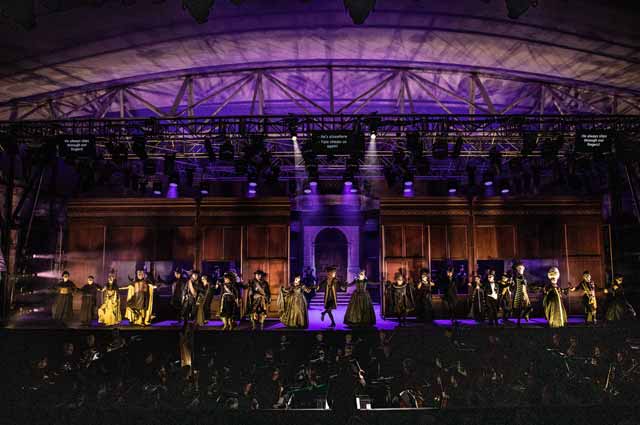 A strong aesthetic, excellent conducting and outstanding principal performances combine to create a compelling production of Un ballo in maschera at Opera Holland Park. There may be a few weaknesses along the way, but because these tend to arise from the production going beyond itself, as if everyone has almost done their jobs too well, even these are highly forgivable.

Rodula Gaitanou has a good track record at Holland Park, having been associate director to Martin Lloyd-Evans on L’amore dei tre Re in 2015 before directing a spellbinding The Queen of Spades in 2016 and excellent La traviata twelve months ago. On this occasion, she sets the action in the 1940s so that when we see courtiers fencing at the start, we gain an all round sense of the Swedish culture of the time because the people are engaged in a noble pursuit that has its own codes. Fencing also captures the mood of the story in feeling genteel on the surface, but possessing sinister undertones because someone could always break the rules of the game and strike a person for real when they are unprepared and unprotected.

Takis’ set brings to life Sweden’s history of strong design by presenting a beautiful panelled box-like structure that at the start stands right at the front of the stage. For various scenes its walls are pushed back to create a larger space, while windows also open in it so we can sometimes glimpse the action that occurs behind them.

In Madame Arvidson’s scene Rosalind Plowright takes the stage by storm as she sports a fancy hat and dress. There are many telling details so that she has a henchman and female assistant who collect money from the crowd, and are always ready to take her cigarette holder from her when she has finished with it. Paparazzi are also present to photograph the King with the newly promoted Cristiano (Ross Ramgobin) after Gustavo’s identity has been revealed. However, this scene as a whole feels so dynamic that it does not always draw our eye to what is important so that everything feels a little over the top. Matthew Kofi Waldren’s conducting of the City of London Sinfonia is outstanding throughout, but he does take things at quite a pace and this is the point where he feels at his most extreme, with the consequence that the exuberance of the scene boils over. Nevertheless, when the production’s infrastructure is not playing a major part at this point, the fact that the performers and orchestra are making everything feel quite so powerful is impressive in its own right. 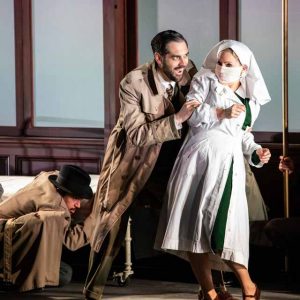 When Amelia goes to gather the herb we see her in a hospital or mental asylum, with presumably the drugs she might obtain there serving the same function as the plant. However, it defeats the idea of her going to the place alone when there are staff tending her, and would Gustavo really risk entering such a building when he could so easily be spotted? However, it helps build atmosphere as the sight of how a patient is treated in silhouette through the windows highlights the ruthless clinical efficiency of the place, while there is a real sense in which Gustavo is trapped in this hospital bedroom and needs to think carefully about how to escape. John Savournin and Benjamin Bevan are very good as Count Horn and Count Ribbing with their differing styles of suit perhaps marking them out respectively as the brains and brawn of the partnership. Here they are clever at goading the conspirators into laughing at Count Anckarström, but also at quietening them just a little after they have agreed to meet with him.

Act III reveals no weaknesses whatsoever as Anckarström in his rage smashes a bust of Gustavo that we previously saw Amelia sculpting. Indeed it is the sight of its shattered pieces that help persuade Ribbing and Horn that he really is on their side and not double crossing them. George von Bergen, who also played Anckarström for West Green House Opera in 2017, is tremendous as he strongly asserts his baritone throughout the evening and feels very much inside the role. In fact, all three central performances stand out as Matteo Lippi’s brilliantly expansive tenor and Anne Sophie Duprels’ beautifully hued soprano bring great distinction to the roles of Gustavo and Amelia respectively.

Another first rate performance comes from Alison Langer as Oscar, whose excellent singing is complemented by some slick moving at the ball. This is executed exquisitely as at first windows in the wooden panelling open to reveal the guests behind, and the whole scene is bathed in Simon Corder’s purple lighting that contrasts with the night sky outside. The costumes are magnificent, as they possess enough unity to generate visual coherence as everyone moves around, but also reveal considerable variation. For example, many capture famous love triangles from history so that three guests are dressed as Cleopatra, Julius Caesar and Mark Antony. In this way, as they dance around each other they play out all of the jealousies and intrigue that lie at the heart of the current story.