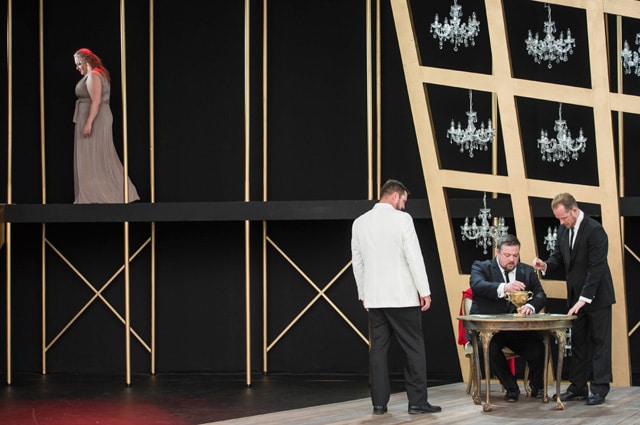 Un ballo in maschera, West Green House Opera’s opening production in its 2017 season, once again proves the ability of this small and delightful summer venue to deliver performances of the highest standard. Director Richard Studer’s prowess at working with the intimacy of the theatre combines with first rate music making, courtesy of conductor Jonathan Lyness and an outstanding cast, to make this an evening to be treasured.

There are, broadly speaking, two ways of staging Un ballo. One is to make everything extremely lavish so that the ball literally drips with ornamentation, while the other is to pare everything down so that the decadence of the occasion is left to the imagination. The size of the Green Theatre’s stage dictated that Studer took the latter approach, and it works extremely well because the refined, minimalist set very much appeals to contemporary tastes. As a result, when we see the guests move around (in broadly modern costume) at the ball we automatically feel the wonder and excitement of the occasion because we are entirely in tune with the aesthetic.

The set is decked out in black and dark gold, so that it feels classy rather than gaudy. A gangway running the entire length of the back of the stage forms an upper level and is connected to the ground by a staircase to one side. This provides an extremely flexible area in which ball guests can appear on the upper level and gracefully descend to the floor, and conspirators can huddle on the stairs. In the latter instance, the fact that things are organised so as not to represent real space means we can believe that in Act II the conspirators in the dark cannot initially recognise Count Anckarström (Renato in the original Boston setting, but here all the Swedish names are used) and Amelia, even though they are only inches away. At the same time, however, we certainly feel the sense of danger because we as the audience can see just how close they are. 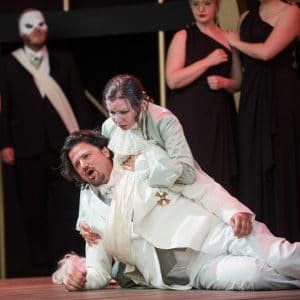 In the centre of the stage is a platform bearing an angular lattice-like structure that, with small chandeliers hanging within its spaces in Act III, proves an excellent framing device that could equally represent Gustavus’ palace or Madame Arvidson’s dwelling. As a rule, if the scene involves many people (such as when Arvidson tells fortunes) the area bears many props, and if it is more intimate it carries fewer so that we can focus on the protagonists themselves. There are also a host of other excellent touches so that the red sash and red mask that Gustavus and Anckarström wear respectively at the ball are mirrored in a sash that Gustavus and Amelia toy with in their Act II liaison, and the red light in which, courtesy of Sarah Bath, the final scene is bathed.

The excellent cast is headed by Rebecca Nash as Amelia and Jonathan Stoughton as Gustavus, who both stood out here in 2015 as Ariadne and Bacchus respectively. Nash’s soprano is blessed with a full tone, strength, vibrancy and feeling, and her performance is truly exceptional. She already has Senta to her name (for Seattle Opera) and more Wagnerian roles surely beckon. Stoughton reveals his large expansive tenor and equally strong presence to good effect, and his scenes with Nash are electric. If on opening night, as was announced, he was suffering from a cold it was barely noticeable. George von Bergen, an English National Opera regular and the Count here in Le nozze di Figaro in 2015, is on top form vocally as Count Anckarström. He also proves an engaging actor, conveying both his genuine hurt at Amelia’s ‘betrayal’ and his sense of humiliation as the conspirators laugh at him at the end of Act II.

Maria Gulik is also a revelation as Madame Arvidson, revealing a deep mezzo-soprano and projecting a strong mysterious allure. It is interesting how her look turns to one of knowing contempt when Gustavus dismisses her prophecy as mad or a joke, and then sorrow as she sees how he really does not grasp the danger. Galina Averina possesses a beautiful soprano and engaging manner as Oscar while Piotr Lempa, Matthew Stiff and Miles Horner all play their parts to the full as Count Horn, Count Ribbing and Cristiano respectively. The small chorus also produces an incredibly tight and balanced sound, and if the rest of the season is up to the standard of this Un ballo in maschera there is much to look forward to over the coming week.