Vadim Gluzman and Angela Yoffe – Ballet For A Lonely Violinist 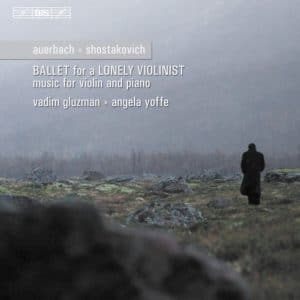 I chanced upon Russian born Israeli violinist Vadim Gluzman during my 2006 summer visit to Budapest where he performed Mendelsohn’s D minor violin concerto with superb musicality and virtuoso technique. However, as I had no music score with me – and I am not familiar with this lesser known violin concerto by Mendelsohn I could not be absolutely sure if Gluzman was faithful to the score.

Though there are a few discrepancies between my edition (and my own reading) of the scores and what I hear on this excellent CD, I can now confidently report that Gluzman’s artistic integrity includes painstaking observance of composers’ intentions. He and his pianist wife Angela Yoffe sound as if one player played both the piano and the violin: surely this is the ultimate accolade for a chamber music performance.

Shostakovich’s Sonata for Violin and Piano, Op. 134 dedicated and presented to David Oistrakh on his 60th birthday in 1968 is not easy listening mainly on account of its length of over 32 minutes. But with their sensitive and varied playing, Gluzman and Yoffe manage to engage the listener even if s/he is not a Shostakovich fan.

Shostakovich here uses the twelve-tone row and also includes, right at the beginning of the violin part and also later, his signature of D-E flat (that is D Es in German). The order of the movements is unusual as the first and third movements are slow and the second movement is fast. Perhaps Shostakovich wanted the performer to warm up in the first movement and to catch breath again in the last. The middle (fast) movement demands solid technique and stamina from the violinist: Gluzman displays both.

Jazz Suite No.1 for violin and piano is a transcription by Michael Gluzman (Vadim’s father) from Shostakovich’s Suite for Jazz Orchestra No.1. Composed in 1934, therefore 34 years earlier than the grand Op. 134 violin – piano sonata, the three-movement composition is full of tasteful humour, strong rhythm and sheer delight. The short movements are titled Waltz, Polka and Foxtrot. And great fun they are too.

Russian composer Lera Auerbach, who emigrated to the USA in 1991, writes music which is challenging but also very enjoyable at the same time. She writes well-defined melodies and rhythms. Though she uses traditional forms, twentieth-century harmonic language and Shostakovich’s influence are evident. Not only did I enjoy listening to both Auerbach compositions on this CD, I ended up whistling their tunes. How often do we have the luxury of whistling the tunes of contemporary compositions?

Lonely Suite, Op.70 (composed in 2002 and subtitled Ballet for Solo Violinist), is a tour de force for the violinist. Auerbach dedicated the six-movement work to Vadim Gluzman, and rightly so. All aspects of violin playing are explored, and virtuosity in the third (No Escape) and fourth (Imaginary dialogue) movements is a must for the performer. But there are chances for lesser violinists too to enjoy themselves by playing the first movement (Dancing with Oneself), the second (Boredom), fifth (Worrisome Thought) and sixth movement (Question). The second movement provides a good excuse for experimenting with the piece even if the player is not very advanced: as per the composer’s instruction, the player has to produce a dull, student-like sound’.

From the musical point of view I am not sure why Auerbach’s Sonata for Violin and Piano, Op. 63 (2001) is subtitled September 11. However, Auerbach – who already lived in New York on that terrible date – asserts connection between that tragic day and her composition. And, indeed, the patriotic hymn America, the Beautiful appears somewhere – even though somewhat hidden – in the composition. The Sonata is composed in one long (but varied) movement, it is full of beauty and inventions and – at last but not least – it receives a wonderful performance from Gluzman and Yoffe.