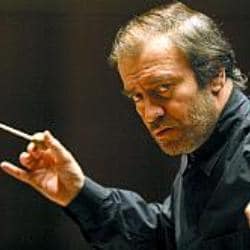 The Vienna Philharmonic is very highly regarded, indeed its prestige might be second to none.

I was looking forward to a concert of perfection, but my expectation was only partially fulfilled.

The orchestra’s two day mini-residence at the Barbican opened with Mozart’s Symphony No.36 in C major, the Linz. Valery Gergiev clearly knows this symphony well, and he conducted from memory.

The orchestra also knows this piece which they performed in their own way. They played with a united sound and with a united style, but they left me in no doubt that they did not need (or, indeed, want) a conductor. Nevertheless, Gergiev persevered – relatively subdued – showing evident respect both for the orchestra and for Mozart.

The orchestra’s velvety sound and style did not seem to allow for historical considerations. Short notes – those specifically mentioned in the programme notes as well as many others marked in my score (published by the Wiener Philharmonischer Verlag, Wien as No.50) – were played beautifully but rather long. Nevertheless, mention must be made of the excellent delicate balance between oboe solo (and unison violins) and bassoon solo (and unison violins) in the Trio section of the Menuetto. And in the last movement (Presto) Gergiev managed to gently coax clear polyphony and lots of dynamic shades from the orchestra.

As in the Mozart symphony, short notes were ignored (that is to say, that they were played long) in Schumann’s Overture, Scherzo and Finale. In the final fugue-like Allegro, Gergiev communicated all parts of the polyphony very clearly. Nevertheless, in the last few bars the ensemble almost fell apart.

Gergiev took beautiful expansive tempos in the first and third movements of Brahms’ Symphony No.4 in E minor. Though it was hardly noticeable, the orchestra was not always entirely together with Gergiev. Indeed, at the very end of the symphony, the orchestra finished a second or so before him. Intonation in the woodwind section was touch and go, clearly marked dynamics were ignored by the violins. The trombones saved the day with their accuracy as well as unusual sound: they lift their instruments and play into the air, while trombone players elsewhere usually project to the floor.

The orchestra appeared to be more willing to be conducted in the two Shostakovich symphonies (Nos. 5 and 9). Gergiev the magician was able to produce great passion, terrific piano passages, real wit (such as with the oboe solo at the end of the second movement in Symphony No.5). The basses with their united underhand bow hold produced real bites (where other bass sections just muddle along). In Symphony No. 9 the exposed and difficult trumpet solo was more than competently played (in the third movement), and the trombones again impressed with their brilliantly played death-like March (fourth movement). Pride of place, nevertheless, must go the first bassoon, who played not only accurately (observing all dynamic marks) but created true music with his song-like solos (in the fourth and fifth movements).

In spite of Valery Gergiev, for whom every single note continues to be a matter of life and death, the Vienna Philharmonic failed to ignite. Indeed, they often failed to play their parts as seen in the scores. They might have been very tired. Or they may be somewhat blunt and boring. Or, indeed, they have not yet got used to Gergiev. Either way, perfection was far off on 13 and 14 September in the Barbican concert hall.