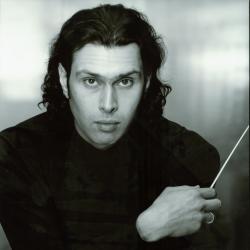 Comparisons are inevitable, especially as Gergiev is the incoming Principal Conductor of the London Symphony Orchestra.

But Gergiev and Jurowski stand up well to comparison, and both will be great assets to London’s music life.

Their passion for Russian music as well as their knowledge of it might make London a centre for Russian music. Gergiev produces wonderful performances with a conducting technique which makes me wonder how his players know what to do. Jurowski’s technique is so clear and economical, but always expressive, that I would be surprised if his players did not know what to do.

The main piece of the LPO’s concert was Stravinsky’s The Fairy’s Kiss. Jurowski knows this music from every angle as he ably demonstrated not only on his conductor platform but also at the pre-concert talk. His lucid explanation of the composition and its creative history put great many pre-concert chat presenters to shame.

The Fairy’s Kiss is a ballet in four scenes, the music of which Stravinsky based on some of Tchaikovsky’s solo piano pieces and songs. The story is based on Hans Christian Andersen’s fairytale The Ice Maiden. The complete ballet, scored for large symphony orchestra, lasts about 45 minutes. Jurowski performed the ballet, rather than the suite version (titled as Divertimento) later arranged for concert performances, but with a few cuts. Jurowski’s performance was vivid and electrifying, witty but also sensitive. The score gave many opportunities for the LPO players to distinguish themselves individually. The solo oboist (Ian Hardwick) and clarinettist (Robert Hill) were magical and secure, and the solo horn player (Jonathan Barrett) was also excellent, but not all the orchestra’s soloists rose to a similar standard. The intonation of one of the wind soloists was arguable, spoiling – for me at least – the last magical orchestral chord.

The performance of Shostakovich’s Violin Concerto No. 2 was well received by audience and orchestra alike but it was a disappointment for me. From my perspective as a listener in the auditorium, Boris Garlitsky is an excellent orchestra leader. Indeed, I have at times attended concerts because he was leading. But as a concerto soloist Garlitsky did not deliver as well as I myself expected. It was odd to see a violin concerto played from music, though good arguments can be made in favour of this.

Perhaps because of performing in front of his own orchestra, Garlitsky seemed (and, more importantly, sounded) nervous until about the cadenza in the first movement. But even after he seemed to regain his nerves, his rhythm was far too flexible (indeed, once even cutting a note value by half). To be fair, Garlitsky delivered the technically immensely difficult violin part admirably. But the magic in this performance was supplied by the first horn (Jonathan Barrett), while the strong rhythm was supplied by tom-tom player Keith Millar.

Barber’s Adagio for Strings seemed an odd choice to precede the substantial Shostakovich and Stravinsky compositions. Perhaps to indicate its string quartet movement origin, the LPO performed it with a slightly reduced number of string players. Try as I might, I could not put myself into the right frame of mind for this opening and neither could, it seems, the players. It was fortunate that we could go home with the excellent Stravinsky performance in mind.