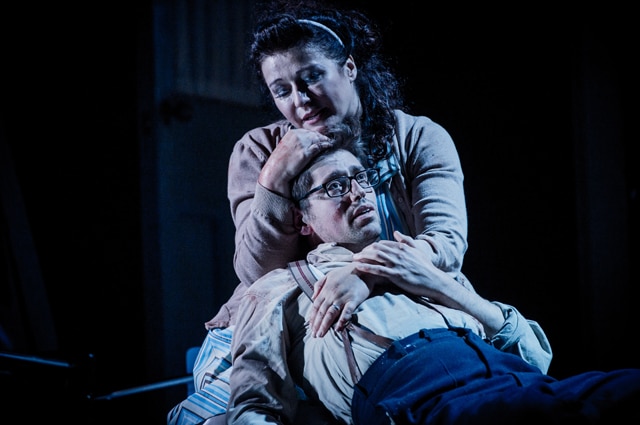 If James Conway’s production of Pelléas et Mélisande for English Touring Opera feels pared down, Oliver Platt’s staging of Werther takes the notion of reduction to another level. The orchestra consists of just four instruments (piano, violin, ‘cello and clarinet), but things are not merely scaled down in terms of physical size. With reduced orchestrations (arranged by Iain Farrington who also conducts from the piano) and the opera being performed in English, everything feels as intimate, domestic and immediate as it possibly could. This means that when we hear for ourselves that the children only like Charlotte to cut their bread, we are more inclined to realise that these are just the type of foibles that infants really have. More generally the accessible language helps us to appreciate that Werther is not merely a philosophical, spiritual being, but that domestic bliss forms an integral part of his image of the ideal love.

The action is set in the Midwest of the 1950s. This works reasonably well because the social hierarchies and expected roles of men and women were probably closer to those of eighteenth century Germany than they are to those of the present day. It was also a time and place in which religion, which is so important a part of the opera, would have had a large impact on individual lives and society’s attitudes.

Oliver Townsend’s set is cleverly constructed so that those features that explicitly suggest the lived in home of the Bailiff primarily appear to either side. This enables the centre, which sports large reflective walls, to act as the house on some occasions, but also as an area in which a variety of scenes can take place. The four-piece ensemble appears against the mirrored surfaces, highlighting it as an entity in its own right while also enabling it to provide a reasonably realistic accompaniment to the children’s carols.

The lesson of this production, however, might be that it is permissible to reduce anything in opera except for emotional impact. For several reasons we rarely move away from thinking we are watching singers performing on a stage to feeling the protagonists’ pains and passions for ourselves. First, the reduced orchestration, which frequently sees principals accompanied by a single line, seldom comes across as being anything more than beautiful. All too often it feels as it the performer is merely singing along to the music, or that the orchestra is simply supporting the singer, with the interaction between the two rarely feeling any deeper or more complex than that.

Second, although it is believable that a poet would dress very smartly, by placing Werther in a stylish but strait- laced suit he feels too conventional and not philosophical or ‘bohemian’ enough. He is played by Ed Ballard, and although he possesses a pleasing baritone (Massenet himself adapted the tenor part so it could be sung by star baritone Battistini in 1902) he does not generate a strong enough centre for this production. The standout performance, in fact, comes from Simon Wallfisch who, with his own ringing baritone and excellent enunciation, manages to shine in the relatively thankless role of Albert. There are also excellent performances from Carolyn Dobbin as Charlotte, Lauren Zolezzi as Sophie, Michael Druiett as the Bailiff and Jeff Stewart as Johann Schmidt.

Act IV is the one occasion when we do find ourselves entirely sucked into the tragedy. Here, the right balance between the earthly and spiritual is achieved as Werther hears the children sing and compares them to angels. We are also presented with an idealised image of dying for love as Charlotte cradles Werther, although there are enough audible gasps from the poet to reveal how death is ultimately bloody, painful and far from beautiful.