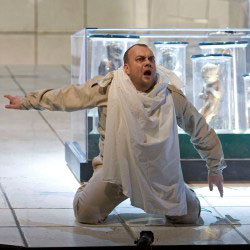 When Keith Warner’s production of Alban Berg’s Wozzeck opened in 2002, it wowed the crowds and won every award in the book.

Over three years down the line, the production still packs the punches, plumbing the depths of this most biting of psychological dramas.

And the musical performance was a thrill, with a largely new cast bringing different slants to the characterisation and narrative of the opera, held together by the vibrant conducting of the young Brit, Daniel Harding.

Harding has just returned from a triumphant performance of the work at La Scala, and his natural feel for the score really shows. Breathing with the singers, this was a sensitively conducted performance, though at times some greater transparency of texture would have revealed the construction of the inner lines of the music. What was remarkable, however, was the way Harding intensified the macabre comedy which is at the heart of the work: light, frivolous music is composed as a stark contrast to the savagery of the plot, and in this performance it was sickening and even repulsive (‘repulsive’ is not a criticism in a performance of Wozzeck!).

The sets by Stefanos Lazaridis are simple but clever. Four glass tanks are unveiled over the evening, the last of which contains the water in which Wozzeck drowns himself. The front left hand part of the stage represents the dwelling place of Wozzeck, where his son sits disquietingly for most of the evening.

When Wozzeck learns that his lover Marie has been unfaithful to him, his already unbalanced mind is fully unhinged. He stabs his wife slitting her neck and letting her blood drip into the tank of water, in Warner’s vision and then drowns himself in the tank. Perhaps the most impressive stunt of the evening was Johan Reuter‘s ability to remain still (as if dead) underwater for the closing minutes of the opera. His son played with unnerving eeriness by Remi Manzi – then gazed around the stage whilst voices called him to his dead mother’s side, reaching a gripping climax and a dramatic, sudden blackout.

Reuter’s performance was wonderfully full-blooded and he made Wozzeck convincingly mad. We could only sympathise for this poor, manipulated man, however repulsive his character. The tone quality was exceptional, and his voice went from lyrical to tormentedly fractured within a phrase.

Making her Royal Opera debut at last! was Susan Bullock, in the role of Marie (this was also her role debut). It’s not a long part, but very compact and full of detail. Bullock’s performance had both energy with starling cries at the emotional peaks and subtlety. I was particularly struck with the Act II Scene III encounter between Marie and Wozzeck, when Marie unwittingly gives Wozzeck the idea of stabbing her ‘rather a knife in my heart than lay a hand on me’, as the programme puts it which was here chillingly sung by Bullock in this triumphant debut.

The strongest vocal performance came from Kurt Rydl as the manipulative and comically sinister Doctor, and Graham Clark was a witty, if weak-toned Captain. Jorma Silvasti was in great voice as the Drum Major, throwing his weight about the stage with dominance.

One of the best contributions came from the chorus, who both sang and acted very well indeed. And the orchestra was marvellous, both in the long string lines and the blazing brass parts.

A stirring revival of a disturbingly gripping production.