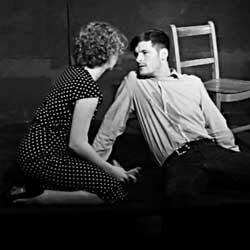 Kissing you is like licking the prongs of a square battery is one of the more intriguing lines of Wretched Bliss, billed as A bitter little opera by Stephen Crowe, currently playing at the Kings Head Theatre in Islington. An intimate and acidic operatic satire for a cast of two and an unorthodox band comprising viola, cello, saxophone and trumpet, it briefly explores a relationship between a man and a woman which quickly goes stale. Cynical above all else, the two-scene opera begins at a party, where the couple meet, and progresses to their home some time later, where they are living together. The couple relentlessly mock each other throughout their relationship, refusing to take the other seriously and inventing all manner of bizarre means of getting the others attention.

The music and libretto are both by Stephen Crowe, who injects a substantial amount of wit into the work through both media. The libretto is full of snappy and entertaining dialogue, ranging from the hilarious to the cutting to the downright bizarre, and peppered liberally (but not over-zealously) with expletives. The vocal writing encompasses a wide spectrum of ideas, from some enchantingly beautiful melismas to a range of comic sonic effects. The instrumental writing, too, is inventive the strings play from a graphic score based around the word wretched, provided in the programme, which pushes both the technical capabilities of the instruments and the imagination of the audience to the limit. A particularly stimulating effect was achieved through a glissando of artificial harmonics on both instruments, reminiscent of a fireworks display. This score was skilfully negotiated by cellist Alex Eicheberger and violist Benedict Taylor.

The brass writing was rather less accessible, possibly because saxophonist Sam Sharp and trumpeter Andre Canniere seemed determined to play as loud as physically possible despite being seated directly next to the audience, which was somewhat uncomfortable for the listeners. However, both players performed with terrific energy, radiating enjoyment during their interjections (which mostly accompanied scene changes) and were entirely captivating and humorous in their performances. The couples refusal to take each other seriously is reflected particularly well in the brass players improvisations, which build upon fragments from the singers scenes, distorting them until they are almost unrecognisable.

The cast were both confident performers who worked well together, hurling the comic banter back and forth in a veritable game of word tennis. Zoe Challenor in the soprano role moved seamlessly between flirtation and frustration, delivering her dialogue with energy and a healthy dose of sarcasm. Glimmers of a focused lower range came through in her singing, but the dry acoustic unfortunately showed up a rather tense and inflexible sound in her upper range which led to a few technical glitches. In contrast, some excellent singing came from baritone Nick Dwyer, who employed a gloriously open and free sound throughout his range, and gave an extremely entertaining performance, balancing cynicism and apathy without a hint of self-consciousness.

The tiny Kings Head Theatre, which is a small outfit at the back of a pub in Islington, is the perfect venue for this little work intimate and dark with the band on stage and a small seating capacity, there was no difficulty hearing the performers or seeing the action (which all takes place around a basic set with no backdrop), although the acoustics of the space do leave a little to be desired.

This opera suffers somewhat due to its brevity; there is little room for character development (although this is well done within the time constraints), and the audience is not given enough time to relax into the humour comedy of this nature needs a while to warm up, and most of the laughs came right at the end of the show. Given time to expand the plotline further, however, this opera could develop into an extremely entertaining work. Nevertheless, as it stands one can comfortably finish a pint whilst watching it, and it is a most enjoyable way to spend an hour.