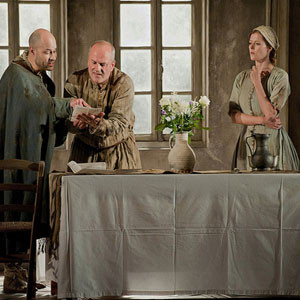 George Benjamin’s new creation, now enjoying its Royal Opera premiere, certainly provides food for thought. It sees angels, who appear in a laboratory like setting, take us back eight hundred years to (re)construct the circumstances under which a medieval manuscript was created.

We see it commissioned by the wealthy Protector and made by the waged Boy. The greatest influence on its contents, however, may well be the Protector’s wife, Agnès, who encourages the Boy to create images of his own desire. The opera’s title thus evokes the vellum of medieval manuscripts along with notions of lust and desire, as well as purity, since skin can be seen as an untarnished entity.

The two-tiered set sees the realm of the angels, represented by temperature controlled laboratories where manuscripts might be studied, pitted against medieval spaces. One interpretation might be that the angels are modern day researchers instigating a ‘flashback’ to speculate on how a manuscript in their possession came into being. There are plenty of real life manuscripts that contain images associated with the known belief systems of the age alongside anomalies that defy anything we currently understand. The opera might therefore be presenting a scenario to explain how such strange images came into being.

In 2010 Katie Mitchell directed Idomeneo for English National Opera, and her decision to support each aria with a continuous stream of visual action only proved distracting. Here, however, people walk in slow motion across the ‘laboratory’ floor, generating a far gentler sense of continuous movement that complements the music well. Vicki Mortimer’s compartmentalised set is generally low lit, and very cleverly the angelic areas are actually more monochrome than the medieval ones.

The opera might also constitute a reflection on the modern day.  The Protector’s wealth encourages him to buy his salvation and see his wife as property, but it is equally a modern trait for people to believe their money can get them anything they want, and permit them to behave as they please. There are also references to diamond encrusted skulls and even a body in a car park, although the link to Richard III can only have been serendipitous.

George Benjamin’s music is all haunting strings, fluttering flutes, sinuous wind, forthright brass and tingling percussion. It hardly contains the type of tunes that you’ll be humming the next day, but it does possess a few truly climactic moments. It is also a joy to hear Benjamin conduct his own work, and one senses that he has wrung out every last intended nuance from the orchestra to fulfil his own vision for the work. Martin Crimp’s libretto is highly effective, and the opera would seem to represent a collaboration of truly equal partners.

As Agnès, Barbara Hannigan is brilliantly striking, especially in the upper register. As the Protector, Christopher Purves proves the perfect ‘Mephistophelean’ baritone, while Bejun Mehta as the Boy is possessed of the most engaging, almost ‘metallic’, counter-tenor instrument. The only disappointment is that Allan Clayton and Victoria Simmonds, who are superb as the other angels, are not given more to sing.

The greatest problem is that while the opera does follow a three act structure, because the staging remains the same in essence throughout and the piece is generally meditative in tone, the narrative arc does not come across as strongly as it might. There are, however, a host of thoughtful touches such as the sight of the Boy finding it such an emotional ordeal every time he has to return to the medieval setting, and the reports of Agnès’s final suicidal leap being complemented visually by her ascent of the fateful staircase just minutes before. Written on Skin may ultimately appeal more to the head than the heart, but it is no less effective for that, and with even the most expensive tickets priced at just £65 there are surely few greater bargains to be found.