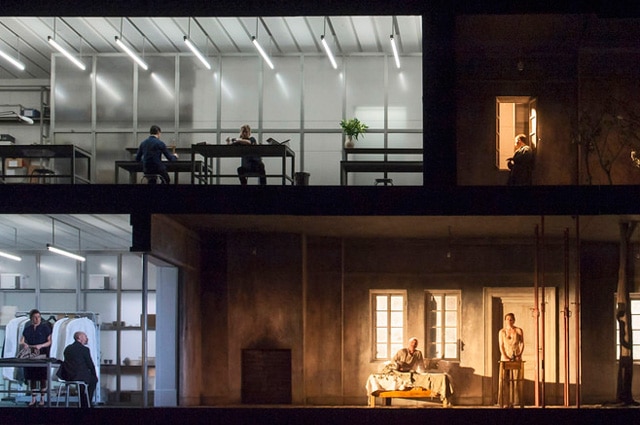 When George Benjamin’s Written on Skin, a co-commission and co-production between five houses in four different countries, first appeared at the Royal Opera House in March 2013 it represented the work’s UK premiere. Less than four years later, it is already being acclaimed as a modern classic, having enjoyed a record number of performances around the world, including a concert performance at the Barbican last March.

On the surface the story, which is based on a thirteenth century Occitan ballad, seems straightforward enough. The Protector, a medieval landowner, commissions a boy to create an illuminated book that will record all of his property, and in the process immortalise him. He treats his wife Agnès as a possession like any other, and she has never known anything else, but the Boy then acts as a catalyst for her rebellion. After seducing him, Agnès persuades him to change the content of the book. This in turn forces the Protector to acknowledge who she really is, and although he retaliates by brutally murdering the Boy, Agnès ultimately triumphs by defying him to the end.

The complexity derives from the fact that the story takes place under the gaze of ‘21st century angels’. In Katie Mitchell’s production, Vicky Mortimer’s two-tiered set sees the realm of the angels, represented by temperature controlled laboratories where manuscripts might be studied, pitted against medieval spaces. One interpretation might be that the angels are modern day researchers instigating a ‘flashback’ to speculate on how a book in their possession came into being. There are plenty of real life manuscripts that contain images associated with the known belief systems of the age alongside anomalies that defy anything we currently understand. The opera might therefore be presenting a scenario to explain how such strange images came into being in one instance.

However, for all of the angels’ supposed detachment, they actively influence the scenario that unfolds. Sometimes they simply appear in their black dress in the medieval spaces to move props around, but on other occasions they don medieval garments to play characters in the scenario. Two become the minor characters of Agnès’ sister and brother-in-law, Marie and John, and another plays the Boy. In a further variation two angels play specific characters while donning modern clothes as they play out a scene that the Boy describes, but which never in reality happened. 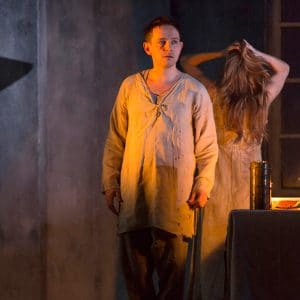 The line between the two realms is also blurred by the fact that when the Protector kills the Boy the angel playing the latter does not die, but neither does he step back into his safe realm totally unharmed. It is as if the whole episode has left a physical and psychological scar on him still. In the wider sense, a modern stamp is put on many aspects of the medieval scenario with frequent references being made to diamond encrusted skulls, concrete and car parks. In addition, although many women in medieval times surely wished to be freer than they were, Agnès’ desire for liberation seems synonymous with movements seen in far more recent times. Coming from the opposite angle, the Protector and Agnès are not simply and completely inside the world that they inhabit because they frequently narrate their own actions. Even the opera’s title is multifaceted because it evokes the vellum of medieval manuscripts along with notions of lust and desire, while still hinting at purity since skin can also be seen as an untarnished entity.

George Benjamin’s music (he also conducts the performances) is all haunting strings, fluttering flutes, sinuous wind, forthright brass and tingling percussion. It is generally meditative in tone, although the evening does possess a few truly climactic moments. While, however, the music is deeply impressive, its strength ultimately lies in the way in which it interacts with the words (Martin Crimp’s libretto is highly effective) to tell a story, and to support the drama and emotions. For example, in one scene the Boy shows Agnès a picture he has made of a real, as opposed to stylised, woman, and after Agnès realises it is her she offers herself to the Boy. The intimate relationship and emotional proximity of the pair is revealed in the way in which they frequently sing the same, or similar, words. Their lines often overlap, with Agnès typically dwelling just a little longer, or going a little higher, on them.

The relationship between the pair is rendered extremely effectively by Barbara Hannigan and Iestyn Davies, which helps the audience to invest themselves emotionally in the piece. Hannigan proves the most convincing of actors as she undergoes the transition from repression to assertiveness and defiance. Her beautiful and striking soprano is exceptionally multi-faceted and the variety of colours that she brings to her sounds perfectly captures the range of emotions that the character feels. Most impressive is the way in which she can give the impression of virtually speaking certain lines while still imbuing them with exceptional musicality.

Iestyn Davies is one of only two principals (the other being Mark Padmore) who did not also perform their role here in 2013, but he has previously played the Boy in Paris. As we might imagine, his brilliant countertenor is ideal, and his first note is so pure that it sounds like a musical instrument. He also acts the part well, conveying a Puckish youthful innocence on the one hand and a knowledge and wisdom on the other, making it totally believable that he should be such an alluring and attractive figure to Agnès.

Christopher Purves is splendid as the Protector, conveying a brutish character, while still making us feel that we can hardly judge him because he is such a product of his time. His baritone is firm and secure, and succeeds in feeling both direct and aesthetically refined. His, and indeed everyone’s enunciation, is also excellent. As the other angels and Marie and John, Victoria Simmonds and Mark Padmore have smaller parts, but both execute them impeccably.

The ending encapsulates the strengths of the opera and production as a whole. The story concludes with Agnès committing suicide by throwing herself from a balcony in an act of defiance. We do not, however, see this but rather the moment that precedes it when Agnès ascends the staircase pursued by the Protector and angels wishing to stop her. It is immensely powerful but not for the reasons we might imagine. With the chase rendered in slow motion, and the musical accompaniment to the scene being dominated by countertenor and glass harmonica, the emotion derives from the poignancy of Agnès’ action coupled with the actual visual and aural beauty of the scene.