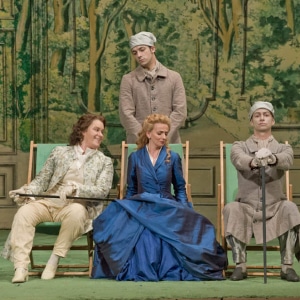 Nicholas Hytner’s version of Handel’s comic opera probably has a lot to answer for: it represented the first time many of us experienced irony in an operatic production, as well as our first exposure to the kind of stage ‘business’ which has now become commonplace. However, whilst others have coarsened and cheapened such things, Hytner’s brilliant concept, with its iconic designs by David Fielding, has stood the test of time and, revived here at ENO by Michael Walling, it is sure to introduce a whole new generation to the joys of Handel.

The staging, in which scenes of the ruins of Persepolis are interspersed with encounters in the gardens at Vauxhall, is full of contrasting delights, most notably the grey-clad, white-faced chorus who flit about as inhabitants of London or acolytes of Xerxes, now delicately savouring gateaux, now parroting ‘May he live forever!’ with positively sardonic understatement; the bunch of doddery Generals playing bowls; the symmetrical deckchairs and topiary, and of course the fabulous procession of ‘curiosities’ which so neatly links the ancient world with the London of Handel’s time, so fascinated by the exotic and sensational.

The production is a constant, but of course the singers have changed; it would scarcely be possible to assemble a finer team of Handelians than the original cast, with Ann Murray, Christopher Robson and Jean Rigby simply unmatchable in their roles, but this revival’s singers included some highly committed, individual characterizations with few stylistic weaknesses. Alice Coote never fails to give her all, no matter how taxing the role, and here she sang with unfailing generosity and presented a Xerxes whom it was possible to understand, if not to love. She does not have Ann Murray’s liquid ease and evenness of tone and projection, nor does she have her patrician bearing, so it was fitting that Coote’s Xerxes was more of an uncertain, swaggering lad than an arrogant despot.

Sarah Tynan, as Romilda, was perhaps closest to any member of the original cast, her gleaming, silvery soprano often bringing Valerie Masterson to mind, and although Rhian Lois is a newcomer to Handel, she sang Atalanta fearlessly and relished the comic opportunities in her role. Andrew Watts, as Xerxes’ brother and the object of the affections of both sisters, has a very distinctive, clarion counter-tenor voice, sometimes pushed a little beyond its limits in the service of expressiveness. Catherine Young, singing Amastris, Xerxes’ rejected love, has a beautiful, pliant mezzo but her music really needs a contralto to achieve its ideal nobility.

The smaller parts were exceptionally well cast; indeed, what purists would consider the truest Handelian voice of all those on stage was present in the Ariodates of Neal Davies, who showed those who so often enjoy his ‘The Trumpet shall sound’ that he is not just a great singer but an excellent actor. Adrian Powter’s Elviro, in the most obviously comic role, as Arsamenes’ servant, displayed a fine-grained baritone and a gift for comedy – who could not love that dress. The chorus sang with gusto whether portraying fastidious admirers of curios or obedient servants of Empire, and the orchestra played responsively for Michael Hofstetter, if at times the sound was muted rather than vibrant.

Nicolas Hytner’s translation is a joy, from the opening ‘May the fates be kind’ to the concluding ‘…each true devoted heart.’ One is so often forced to endure translations which are either over-literary or simply silly, with such poor scansion that the music suffers from a jarring effect on the ear, but this was so elegant, so truthful, that it sounded as though the libretto had been written in English and not Italian.

This is a very short run – just four more performances – so if you have yet to see it, take the opportunity while it lasts. This Xerxes may look and sound fresh enough to endure another few rounds of revivals, but it’s just as likely that it will be retired and replaced by the efforts of a muppet who has no experience in opera, cannot see the point of Handel, and will pepper the stage with stuffed rag dolls, whilst Xerxes will be required to sing ‘Under thy Shade, dearly beloved Tree’ to either a bottle of vodka or an AK47. You have been warned.