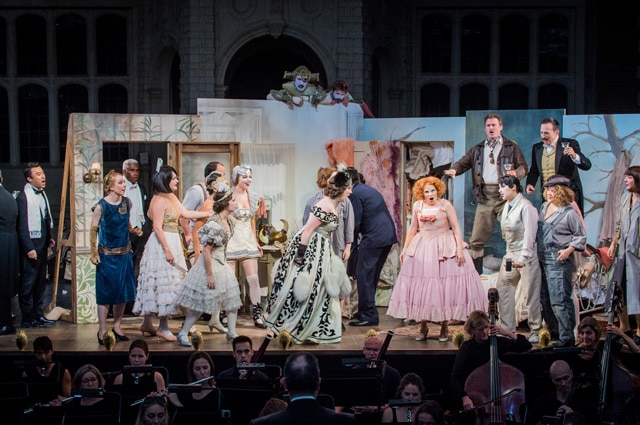 Although Opera Rara gave a concert performance of Zazà at the Barbican in 2015, and also recorded it for CD, it remains an opera by Leoncavallo that was immensely popular when it premiered in 1900 but has been rather neglected since. The opportunity therefore to witness a full staging at Holland Park is most welcome, and both Marie Lambert’s production and the performers would seem to do full justice to the work.

Set in Saint-Étienne and Paris, the story concerns a music hall singer called Zazà who enjoys much attention from male fans and her ex-lover and cabaret partner Cascart. She ends up falling in love, however, with the married man Milio Dufresne after she makes a bet with the revue writer Bussy that she is able to seduce him. When she finally discovers that he has a wife she sets off to his house to confront him. When, however, she ends up meeting his daughter there, she remembers her own childhood without a father, and cannot bring herself to break up this family. After an intense exchange with Milio she finally ‘releases’ him (it transpires he had already resolved to leave her) and, no matter how hard she finds it to be without him, resumes her career as a music hall performer.

Although the story may seem to be predominantly about a domestic affair, Lambert cleverly reveals the class system at play. The Overture sees the entire cast lined up from the ‘lowest’ to the ‘highest’ with, broadly speaking, the backstage staff on the right, the music hall performers in the centre and the ‘well-to-do’ on the left. The staging is extremely dynamic with Alyson Cummins’ set creating three distinct areas. On the left is the performance area in the music hall, arranged so that we see it from the back yet are able to glimpse the performers on its stage. In this way across Act I, while much of the action takes place backstage during a show, we actually see the stream of acts taking place in the background. Dancers do routines with balls and bubbles, and hands sweep the stage in between. There is a double act featuring the characters of Don Quixote and Sancho Panza, while a man peddling a stationary bicycle behind the backdrop (so that we see him clearly) creates a silhouette on the stage.

Zazà’s own dressing room takes centre stage and comprises five panels of stage scenery, set up to create two walls. This creates a colourful area for the action while setting the space very much within a theatrical tradition. It is also intelligently arranged so that there is a second unseen entrance to the room at the back of Zazà’s wardrobe, which is cut into one panel. This enables Zazà’s dresser Natalia to be in or out of the place in an instant without having to make a grand entrance or exit each time. On the right is a large wooden staircase, replete with props, that captures the rest of the backstage area. The stairs here constitute the back entrance to the theatre so that characters tend to come in this way. As an extra detail we see Natalia periodically enjoying a liaison with one of the performers here.

Act III sees a far more Spartan set present Milio’s house in Paris. A backdrop creates a window that reveals a view of the Eiffel Tower, but for Act IV this is replaced with a blank plane. This creates a virtually neutral space for the final ‘confrontation’ between the two central protagonists, thus allowing the characters themselves to dominate the proceedings. Throughout the evening the attention to detail is strong as there are a host of excellent touches. These range from seeing the dismissive manner in which Zazà handles a large bouquet of flowers given to her, to the way in which Natalia is initially excluded from being given champagne when the stars and impresarios around her drink a toast, but then eagerly holds her glass out when she is finally offered some. 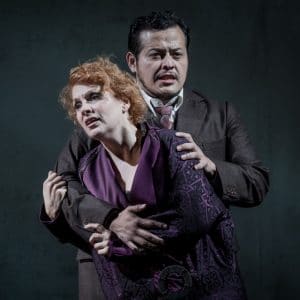 Some of the principals take a little while to warm up, and there are occasional issues regarding balance between orchestra and performers. Overall, however, both the singing and Peter Robinson’s conducting are strong and any minor problems on opening night may well be smoothed out in subsequent performances. Anne Sophie Duprels provides a deeply involving portrayal of Zazà. It is by no means an easy role as a significant amount of it sits relatively low in the voice, but as the evening progresses she conquers all of its challenges with increasing ease while bringing an immense weight of emotion to bear in her voice. Her final lengthy scene with Joel Montero’s Milio is extremely powerful as he also sings at the height of his game, bringing his expansive and aesthetically pleasing tenor to the fore. As Cascart, Richard Burkhard is a model of consistency from the outset displaying his strong and secure baritone to excellent effect. Several other performances stand out from among the large cast including Ellie Edmonds’ Natalia, Louise Winter’s Anaide (Zazà’s alcoholic mother), and James Cleverton’s Bussy.

It is interesting how in terms of the story Zazà seems to resemble Madama Butterfly, which premiered four years later,although the book it is based on was published in 1898. Both works concern a woman who sacrifices her man because she has to put the interests of a wider family above her own. There are still differences including the fact that Zazà does not die, makes more of an active decision perhaps to stand aside (although even if she had not she would probably have been forced to do so), and does not have to lose her own child to make up this family. In addition, no matter how one views Milio, he does not seem quite as callous as Pinkerton, who displays a casual attitude towards his marriage to Cio-Cio-San from the outset. On the contrary, he shows great self-awareness by initially proclaiming that he would not wish to meet someone like Zazà through fear that he might find himself all consumed by her.

Nevertheless, when in Act IV Zazà and Natalia gaze outwards at a moment when all seems lost, and then spot Milio approaching with the music changing to offer them just a glimmer of hope, it feels very much like Cio-Cio-San and Suzuki spying Pinkerton’s ship approaching. Similarly, Cascart takes on a Sharpless-style role in appealing to Zazà to see reason and abandon all hope of happiness with Milio. The parallels are certainly not lost on Lambert who at the end has dressers put Zazà into a costume. This signifies her decision to try to forget Milio and resume her music hall career, but it makes her look a little like a stylised Madama Butterfly.

On opening night heavy rain came pouring down ten minutes before the end, with the sound of it pelting against the tented auditorium providing a formidable barrier for Duprels and Montero to overcome during some frequently quiet moments. However, it worked rather well in that the heavens seemed to come crashing down, as they do for Zazà, at exactly the moment at which she tells him to go back to his wife in the knowledge that his relationship with her has not been disturbed.

Opera Holland Park’s 2017 season runs until 29 July, with a week of film screenings following this. There is also a performance of Verdi’s Requiem on 1 August in aid of the Rugby Portobello Trust in order to help the community following the Grenfell Fire. For details of this and all events visit the Opera Holland Park website.