Why I Love… Götterdämmerung

by Benjamin Poore
published: 29 Jun 2020 in Classical and Opera, Why I Love
Tweet

Our look at Wagner’s Ring Cycle concludes with Benjamin Poore’s take on this epic work. 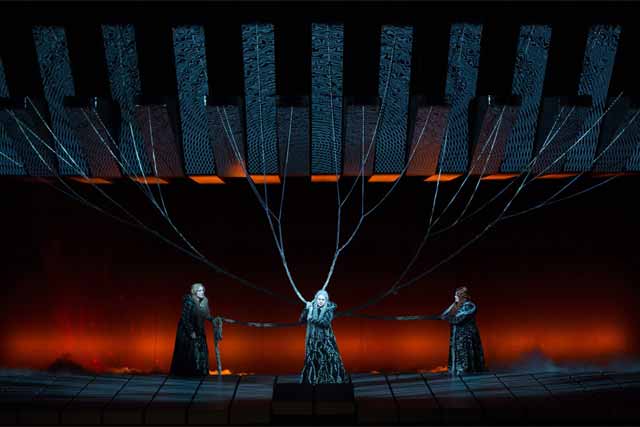 Three days, over ten hours of music, and on to the final part of Richard Wagner’s Der Ring des Nibelungen: Götterdämmerung, or The Twilight of the Gods. Though climax it was also Wagner’s starting point: in 1848, on the run from the law, he would conceive an opera on the death of the hero Siegfried, building backwards from that to the very beginning of the world itself in Das Rheingold. It’s a world he will bring crashing down after a music drama of heavenly length.

Fresh from mountainous love nest, Siegfried throws himself back out into the world to accomplish new deeds, gifting the ring to Brünnhilde before he goes. The gods, Waltraute tells us, have given up – Wotan watches for the end, handing over responsibility for the world to the corrupt Gibichung leadership, Gunther and the Talleyrand-like manipulator Hagen. The latter, son of dwarf Alberich, is desperate to secure the ring for himself, and engages in an intrigue that entails potions of forgetfulness, abduction, misdirection, and double-crossing, ultimately capturing Brünnhilde and marrying Siegfried off before murdering him.

It falls to Brünnhilde to put the world right by building a pyre that burns it down, returning the ring to Rhine as the world is cleansed and the stage cleared, in ending that is perhaps one of the most musically devastating one can ever experience. (The breathtaking stillness at the end of Barenboim’s 2013 performance at the BBC proms is still one of the most unforgettable musical experiences of my life.) It’s an opera about so much: the madness of crowds, the atavistic allure of power, the nature of political change, and the power of love.

It is perhaps the strangest, most uneven, of the Ring’s music dramas. In the three that come before, Wagner cleaves relatively closely to the rules he sets out in his essays The Artwork of the Future and Opera and Drama: people don’t sing over each other, and there are no arias, just an unfolding, continuous flow of text, intermingling action and reflection. Much of the previous action happens at small-scale, between two or three people, and rarely seems grounded in a wider social or public arena – even if the stakes have been the fate of the world itself. But in Götterdämmerung we move fully to the world of human beings, the court and pomp of the Gibichung, replete with weddings, hunting party, and military rally.

Wagner also takes recourse to more old-fashioned forms at times, vestiges of the grand opera that he was supposed to banish from his own: the revenge trio that closes out Act II, for instance, or the great chorus number that helps to launch it. The extravagantly erotic love music of the ‘dawn’ sequence comes crashing against the kind of political intrigues we’d expect to find in Meyerbeer or Don Carlo. But how fitting that an opera about the conflagration of the old order – a decadent one at that – on contact with the new pits musical regimes against each other. Götterdämmerung also contains some of Wagner’s most visionary music to date. Brünnhilde’s jagged vocal lines have an expressionistic intensity that presages music of a later century; the opening prologue and music of the Norns, with its ethereal, hieratic weightlessness, points the way to Debussy.

Serious Wagnerians could wrangle over top recordings for days, so I offer only a cursory, idiosyncratic survey here. One of the most gripping ways to experience the music is with Richard Farnes and Opera North – a superb recording in its own right – where a full frontal conductor-cam allows you to follow every beat and cue from the podium, a wonderful reminder of the enormous energies produced in the orchestral engine room.

Pierre Boulez’s centenary rendition captures the score’s modernity with remarkable translucency and poise. One can hear Debussy’s troubled fascination with Wagner throughout, particularly in the iridescent Rhine Journey, and his conducting opens up the extraordinary orchestral mechanics of timbre and balance for all to see – a little too revealing for some, though. An underrated Brünnhilde who is more than a match for the famous Birgit Nilsson is Astrid Varnay, joined by Wolfgang Windgassen and Gottlob Frick – a terrifying Hagen – in a 1969 live recording from the Royal Opera, conducted with thunderous fervour by Franz Konwitschny.

“It’s an opera about so much: the madness of crowds, the atavistic allure of power, the nature of political change, and the power of love”

My own rather divisive favourite is Reginald Goodall’s English language version for English National Opera from the 1970s. To say Goodall’s tempi are glacial is not, in this instance, a criticism, but rather suggests the geological cragginess and monumentality he calls forth from the score. The opening bars of the prologue are truly a glimpse of eternity; the dawn music burgeons with rare luminosity and tenderness. Alberto Remedios – a singer so hardcore he sang Siegmund as well in the same cycle – delivers a remarkable Siegfried, polished in timbre, never nasal, and nobly fluid (perhaps owing to Goodall’s judicious indulgence of portamento with his singers).

Götterdämmerung contains the most notorious stage direction of all time, one that, despite the technological phantasmagoria of modern theatre, remains in some sense unrealisable to this day: flames rises to engulf Valhalla, the Rhine overflows its banks, the Rhinemaidens frolic with the reclaimed ring, and the world ends. There’s no question of being ‘faithful’ to this astounding vision: it exists on a metaphorical plane that makes literalist realisations seem ludicrously banal. Robert Lepage’s Metropolitan opera Ring, with its notorious ‘machine’, is the paragon of wastefully deploying expensive stage wizardry to resolutely conventional ends.

Directors have a duty to try though, and the more successful are amongst the most freewheeling. Patrice Chéreau’s Marxist realisation of the revolutionary context and undertones of the work culminates in a penetrating final tableau, as the proletariat stare out into the audience as the dry ice clears, daring us to act. Harry Kupfer’s futurist Bayreuth production from the late 1980s ends more fatalistically, albeit with rock stadium lasers, as the bourgeoisie watch the end of the world on television, seemingly caught in the postmodernist trap of alienated spectacle: Wagner in the era of Marshall McLuhan.

One of the most intriguing visions of the work comes, I think, from Kasper Holten, whose Ring at Royal Danish Opera interweaves mythic and domestic scales. Brünnhilde’s journey – a radiant Iréne Theorin – is into her own prehistory, rifling through an attic that archives the sins of her father, which ultimately goes up in smoke. Indeed Götterdämmerung is a family drama about estrangement and betrayal as much as it is the collapse of world order, and the film of the production makes use of striking close-ups and unusual camera positions, affording an unusually intimate mood, albeit one consistent with Wagner’s inwardness and psychoanalytical acuity.

Holten also captures the audiences’ and artists’ own entanglement in our idea of Wagner. In the prologue the comically dowdy, bourgeois Norns rise from the audience itself and compare notes over the show’s programme, chiding the excesses of regietheatre approaches, and play-acting it the with traditional props. Here snapping the Norns’ rope of fate – the thread connecting tradition and the past – is superimposed with the searching question of how we stage this work in the 21st century. Chereau’s Ring was greeted with boos for years before audiences accepted it as a modern classic – so too Frank Castorf’s recent iteration at Bayreuth.

And what of the end? Sieglinde’s rapturous music from Die Walküre returns for the final phrases of the opera. It is the music she sings as she learns from Brünnhilde that she is carrying the world-redeeming Siegfried. In Kaspar Holten’s production, as this same music soars, the pregnant Brünnhilde chooses life over immolation in the very final bars – returning to the stage, after the fire has died, with a newborn baby in her arms. Dämmerung means both dusk and dawn.