A Camp’s Nina Persson: “We still have our ancient instincts, but we have been raised up by society and laws” – Interview 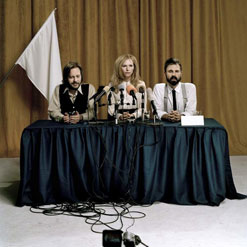 Nina Persson, singer with The Cardigans, is back with her other musical project, A Camp. A woman who’s changed her looks nearly as many times as Annie Lennox during her Eurythmics years, Swedish native Persson got international as she spoke to us down a phone line from New York to Budapest. Inevitably A Camp’s new record Colonia came up in the conversation, but first off we wanted to know why she has in two bands.

“The first time I started A Camp was in 1997. I was never really looking to do anything else than The Cardigans,” she explains. “But then I met Nicolas Frisk who is plays the guitar and keyboards. We met in a bar, talked about music and realised we liked the same stuff, we just wanted to try to write some songs together.” A band was born when the songs “turned out to be songs that we really loved. It became a record; I liked it so much I wanted to pursue it.”

But The Cardigans did not let Nina go, so the project had to wait till the turn of the Millennium, when the first, self-titled A Camp album came out. It was an album of excellent songs, and as is the case with better musical projects, it even spawned an excellent b-side, Charlie Charlie. Why a good song is left off an album is most times a mystery.

“I love that song, too!” says Persson, “but I had the feeling that it didn’t have the same vibe as the rest of the record. It was sort of speaking a different language than the rest of the songs. Someday we’re going to play it live, but it just didn’t fit then.”

After the debut record she put her old Cardigans back on and came out with two, commercially less successful yet critically acclaimed Cardigans albums. She married to Nathan Larsson, the American bass player, and moved to the USA.

How does a European cope with a move Stateside? “I never really thought it was that difficult to live in the States,” she says, “but I also had a help, because obviously my husband is American, so I came straight into his life and family and everything.

“And then even before I met my husband, I’d been here much for work,” she continues. “The reason why I moved here was because I felt so much at home here. I never really struggled too much. There are always annoying things that you have to deal with, like work permits and so forth, but that’s the do-it-and-get-it-done-with sort of thing. But I feel like I found a home here.”

Seemingly she is a lucky person, not only successful in music, but in nesting. However, she adds that “of course New York is also very different to the rest of the United States. As a European I feel as if New York was a part of Europe, almost, because it is so international, as many foreigners as Americans, nearly. And I almost see more of my Swedish friends, when I am here than I ever did in Sweden to be honest, because people love to come here.”

In those years between the two A Camp records Nina was also up for less known collaborations and one-off tracks, as in covering R.E.M.‘s Losing My Religion for a Danish film soundtrack. “That was actually me and my husband. We have a friend in Denmark who is a filmmaker, and she wanted this song to be in the movie, so she directly asked us to do it. It was fun, I like that song a lot.”

Coming to Colonia, she does seem to have lost her religion a bit. Bitterness has never been too far from Persson’s lyrics in or out of The Cardigans, but Colonia seems to have even more of it than any previous records. Talking about the song with a telltale title It’s Not Easy To Be Human Anymore she shares that “we wanted to have a theme on the record which was mankind or civilisation contra nature. That song was about how mankind was being socialised and civilised. But still, we cannot deny how primitive we are, and we still have our ancient instincts. But we have been raised up by society and laws. That’s why I also talk about ‘animals kill in the jungle / people would like too (sic) / but it’s not that easy to be human anymore’. So it is a game of intelligence versus instincts. I just thought it’d be good to write a song which was lamenting about that.”

How does her approach to songwriting with A Camp vary from that with The Cardigans? “It is a very different process of writing songs, simply because it is different people, different songwriters, and the sort of identity of the songwriting, so it has a different feel to it.”

Musically speaking the most obvious difference is the dominant presence of the brass section – “I love horns!” she says. The first album was produced by Sparklehorse but they did without a producer this time round. “The songs are all written by us, so we do the arrangements well. Sometimes the musicians, who play the brass or the strings, of which we also have quite a lot on the record, also have great ideas that we incorporate. But the final arrangements are done more or less by the three of us.”

Next up comes the tour. “It starts at the end of March, and goes on through Scandinavia and all of Europe, and then we go to the US, so we’ll have a long one to the summer.” And come summer, there’ll be festivals. Who better for a spot of Camping?

A Camp MP3s or CDs

A Camp on Spotify

More on A Camp
A Camp’s Nina Persson: “We still have our ancient instincts, but we have been raised up by society and laws” – Interview