Alanis Morissette: “I enjoy being intellectual and sexual, emotional and spiritual. I love all of it” – Interview 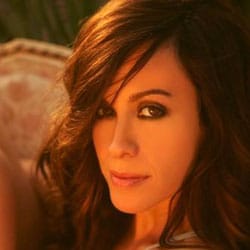 Alanis Morissette‘s career statistics are staggering. She’s sold 55 million albums, won seven Grammys and, lest it be forgot, her international debut Jagged Little Pill remains the biggest selling debut album by a female artist of all time. As she unleashes her latest work, Flavors Of Entanglement, we caught up with Alanis for a chat about how she deals with emotions, being in the public eye and the possibility of mini-Alanises in the near future…

Alanis Morissette has just had her make-up and hair done, which may explain the two-hour delay of our interview. The 34-year-old Canadian singer, sporting caramel blond highlights and a few extra pounds, is now an older, wiser, calmer version of the angry rock chick that swept the music charts by storm over a decade ago when her debut album Jagged Little Pill was released. Its effect was more potent than Prozac, its influence resonating post-feminist ideas and paving a rocky road to self-discovery.

Her latest venture, Flavors Of Entanglement, is produced and co-written by Guy Sigsworth. An unlikely choice, as the Brit is rather known for working with electronica wonders such as Björk. “I heard Let Go, the song he did with FrouFrou,” remembers Alanis. “I just remember hearing it last summer on the Garden State soundtrack and I was blown away by this soundscape. I thought it was so flawless. I thought, ‘Who’s this guy?’ So I called him and said, ‘Do you want to write together?’ So I went to London and wrote 12 songs with him, and then he came to LA and we wrote 12 more songs – so easy and he’s such a genius.”

The result is a haunting melange of folk rock with an Eastern resonance, electronics and strings. “I’ve always leaned toward the scale. That musical scale is so yummy to me. The primary scale is like the primary colours: yellows and reds. The Eastern scale is like purple and blue. So I like the secondary scale or colours a lot. It’s more emotional. To me, anyway.”

Emotions are what she knows best. A singer, songwriter, actress and writer, Alanis Morissette offers yet another narrative of her life and thoughts, minus the irony of her younger years. Lyrically, she is less angry and Flavors is more about recounting her experiences and sharing her thoughts, like a journal. It certainly has the aroma of catharsis. “I think most of my anger in terms of the reactivity of it came out in a song called Straightjacket.” A track aimed at her ex-fiance, actor Ryan Reynolds, who is now engaged to Scarlett Johansson.

But she’s over it. “There’s only so long I can go blaming, although it’s fun to blame in art, whether you’re painting something or writing something, it’s like AAAARGH! But in my day-to-day life, it doesn’t work so well. But [this album] was very cathartic. It was like a life raft because I was in the middle of it – it was all done in real time – while I was writing it, which is a different experience than writing in retrospect.” The album was written in real time, as she was coping with her break-up. “There’s an urgency to it and to be honest, if I was home sitting in a corner curled up in a ball, I would have been going crazy. So thankfully, I had to be somewhere at one o’clock every day. That helped!”

She also evokes her maternal instincts. In Incomplete, she sings: “One day I’ll be at peace/ I’ll be enlightened/ And I’ll be married with children and maybe adopt.” Should we expect a mini Alanis soon? “Not today!” she laughs. “Maybe tomorrow! Yeah, at some point, probably in my late 30s, I would love to have a family. I’m not ready yet though. I’m too immature.” Yet she was surprisingly mature when she hit the scene at 19 and when Jagged Little Pill was being swallowed leaving an aftertaste. “I was very high-strung and still am, but very, very high-strung. And then I think I was really smart for a 19-year-old. Yeah, there were a lot of philosophical things I was dwelling in at 19 that technically I’m still dwelling in now, so there is a timelessness to that record for me.”

Her previous works are now like photographs of captured moments, a bygone era of herself, but still applicable. “They’re snapshots of different periods of time. I appreciate it and I’m still charmed by some of them. And some of them still apply more than ever. Some them I feel apply more now than they did then – to me, anyway – like I wrote those songs for my future self.”

Most female stars that age nowadays spend their time not working and showing their privates to the paparazzi, victims of the pressures of image. “A lot of pressure! It’s getting more so in the music industry. Personally, I enjoy being intellectual and sexual, emotional and spiritual. I love all of it, so I try to show all those pieces so it’s not just one flavour. But I see a lot of women who, for lack of a better term, are dumbing themselves down. It’s depressing.”

Not Alanis, a former child star herself. “I don’t know if I did stay together. My challenge was to unravel. A lot of the people in the public eye right now, their challenge is to parent themselves. My challenge was to be less responsible ’cause I was so overachieving, perfectionsitic (sic), really hard on myself that way. So I needed to go in the other direction, let loose a little bit.” She let loose in her songs, but also in her parents’ kitchen. “When I was growing up with my parents, we were always sitting around the kitchen table pontificating and thinking about things. Everyone was sharing their opinions and discussing and analysing, so…”

“I enjoy being intellectual and sexual, emotional and spiritual.” – Alanis Morissette

She’s even writing a book. “The outline’s already been done. It’s got photos and essays and articles that I’ve written: self-care practices and humor and a travelogue.” No doubt her upcoming tour will also feed new material into the book. “I think when I’m done touring for this record, I’ll really focus on it and finish it.” So don’t expect it before late next year. What’s it going to be called? “I’ve had a few (titles in mind), but I don’t want to jinx it! I haven’t nailed it yet.”

Maybe she can call it My Humps, named after the Black Eyed Peas hit she covered “as a joke.” The video ended up getting zillions of hits on YouTube. What is most interesting is her interpretation. She totally makes it hers, transforms into an entirely new song, prompting you to actually listen to the lyrics – ironically, something Alanis could have written. “When I started singing it, I thought it would be funnier,” she admits. “But the lyrics are pertinent, like talking about women being receptive to men providing for them and giving them gifts. But it’s not as hilarious as I thought it would be!” No, it’s not. It’s rather poignant, though the video does seem to life a bit of the tragic mood. “We did a video in my garage and I thought a couple of hundred people would get a kickout it.” Multiply that hundred by thousands of YouTube hits. “I love just filming something and sharing it. I used it to share it through DVDs or special packages. But the fact that I put it up on YouTube is very exciting.”

As all music stars these days, Alanis has become Internet savvy. “I care more about my website now. It’s a direct connection with people.” Still, she doesn’t Google herself. “I don’tlike to read what people think of me. Positive or negative, it freaks me out. I have so many friends in my life that give me feedback, positive and constructive. That’s all I need. The people I feel safe with and loved by are the people I want to hear from.”

So did she hear from Will.I.Am, praising her for her cover? “Fergie sent me a cake in the shape of a butt saying, ‘Alanis, you’re a genius.’ Very sweet, good sense of humour.”

Alanis Morissette’s Flavors Of Entanglement is out now through Maverick. Tour dates and further information can be found at alanis.com.