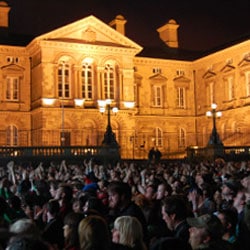 It’s not often that a capital city has the opportunity to redefine itself. But having emerged from a time when its identity was inexorably linked to violence and trouble, Belfast has been tackling the challenge of moving forwards head on as it’s developed itself into a place that people want to visit.

Uniquely situated as a cultural junction, it has the potential to be hailed as a perfect weekend city destination. A huge amount of money has already been invested and is reaping rewards as travel guidebook series Frommer’s named it one of the top 12 destinations to visit in 2009.

We hopped over the Irish Sea to see how its music scene and in particular its urban festivals are bolstering the city’s appeal.

Belfast’s musical pedigree is varied. Ask a local for the city’s ultimate music legend and you’ll likely be told Van Morrison, who grew up in a tiny terraced house not far from the centre. We know this because we went on the Oh Yeah Music bus tour (yes it’s named after the Ash song), drove past it and saw the plaque. But the city also produced 1950s sweetheart Ruby Murray (she of curry rhyming slang) and had a hand in the formations of Thin Lizzy and Snow Patrol. The bearer of more recent stars David Holmes, Duke Special and Two Door Cinema Club, Belfast demonstrably also has reach into modern musical trends.

The first festival to mention happened to be on when we were in town. The File an Phobail takes in various cultural elements to provide the city with an 11-day festival of music, comedy, drama, art exhibitions and speakers about all sorts of things in venues dotted around the city.

The night we were about, so was Damien Dempsey, playing in a marquee in Bank Square. Actually a Dubliner, he’s nonetheless welcomed as a hero here with his lyrics of difficult times and his working class anthems. Together with his support act, superb local singer Grinne Holland whose bilingual take on identifiably Irish styles was charming, they both engaged a sold out audience and got this particular festival off to a grand start.

The rest of the line-up was a bit of a ragbag of styles. American singer songwriter Michelle Shocked was cast alongside ’90s throwbacks The Wonder Stuff and ’80s throwbacks ABC. However, when blended in with all of the other festival-aligned events going on around the city, it was a wholly impressive series that made an effort to include Irish culture rather than just adopt the same kind of line-up that could appear anywhere in the United Kingdom.

A festival with star clout – Belsonic

The new kid on the circuit since its inception in 2008, Belsonic this year expands from three nights to eight. Taking place in the outdoors arena of Custom House Square, it’s a series that perhaps owes something to the superb Somerset House Summer Series that can be relied on to provide some of London’s highlights each year. This year headliners will include Kasabian, Florence And The Machine and Soulwax/2ManyDJs with credible support being provided by the likes of local boys Ash and Two Door Cinema Club and the not so local Major Lazer. The fact that it’s expanded so much and had no trouble selling its 5000 capacity on many of the nights will hopefully secure its status as a fixture on Belfast’s music scene.

This year’s 12th Open House Festival takes place in the rapidly developing Cathedral Quarter of the city. Consolidating on its slant towards the contemporary folk and alt-rock side of things, this year’s showcase acts include Mumford And Sons, Modest Mouse and Wilco. Those established names will play a marquee in the same square as the Belsonic event while smaller gigs by the likes of Lissie and Villagers will be taking place elsewhere. The superb selection of acts would mark this festival out as an absolute highlight in any city’s music calendar.

A festival for the highbrow – Belfast Festival at Queen’s

Run by Queen’s University, Belfast, this is the festival for grown-ups, or at least those with grown up tastes. Over its 48 years it’s hosted the likes of Dizzy Gillespie, Ravi Shankar and Jimi Hendrix. Attracting 60,000 people each year, it naturally expands into spheres beyond music but this year you can expect performances from Paul Brady, Yann Tiersen, Antoni Wit and Afrobeat drumming legend Tony Allen. An extensive calendar of theatre, dance and film listings should ensure that this year’s festival will maintain the high standards it’s set for itself.

For when you’ve missed all the festivals – the gig section

Of course, as with any decent urban music scene it’s not all about the festivals, and there’s a whole heap of venues to check out if none of the above coincide with your visit. The Titanic Quarter, currently experiencing huge regeneration, is home to the Odyssey Arena, essentially Belfast’s equivalent to London’s O2 Arena (upcoming concerts include Lady Gaga and Guns ‘N Roses). Then you have small gig venues like Limelight (Elliot Minor, Mudhoney), Spring And Airbrake (Wolf Parade) and Auntie Annies (Chief, Brendan Benson). The Queen’s University student union contains Mandela Hall which will soon have a mouth-watering, ear-assaulting and potentially head-butting double bill of Crystal Castles and HEALTH while Speakeasy will play host to Bear In Heaven. Add into that mix venues such as the Sonic Arts Research Centre (Mercury Prize nominee Kit Downes Trio) and the Waterfront Studio (The Divine Comedy) and you have a city that has a genuinely excellent turnover of music events that cater to both the populist and the niche.

When you consider that beyond all this, every other pub has a band playing away in a corner, Belfast is a city that does, it turns out, offer a huge amount when it comes to musical attraction. It might just be a small part of its reinvention, but a world-class city needs a heart full of culture if it wants to compete, and that’s exactly what Belfast has got.

• More about Belfast and upcoming music events there can be found at gotobelfast.com.