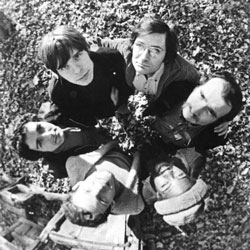 Often spoke of in the hushed, reverential tones usually reserved for religious leaders, the legend of the German improvisational rock group Can can be monolithic and forbidding.

Formed in Cologne in 1968, Music teacher Holger Czukay and orchestral conductor Irmin Schmidt recruited the late Michael Karoli and jazz drummer Jaki Liebezeit to their cause of creating a music without frontiers.

By pure serendipity, two successive vocalists, Malcolm Mooney and Damo Suzuki would fall into their orbit, both proving oddly simpatico with the band’s open-handed vision.

With both Schmidt and Czukay assisting in remastering the first eight albums of the band, musicOMH provides a user’s guide to Mute’s deluxe reissue series, pausing only to reflect on Can’s arguably greatest moments to which you are cordially invited to disagree…

After the 500 copies they pressed sold out within a week, United Artists signed the five members of The Can (as were) to a record deal, and unleashed Monster Movie (1969) on an unsuspecting, and it must be added, mainly ignorant public.

Sporting Jack Kirby-style cover artwork, Monster Movie is a workable union between free-form dynamics and strict control. Less encompassing in its scope than later Can werks, this is the five still a sum of influences (Velvets, Beefheart, Mothers), with Karoli’s searching guitar lines if not dominating proceedings, then often leading the line. Father Cannot Yell revels in a garage-aesthetic, an opening statement of intent that this classically-trained collective were as much committed to intuitive flow as symphonic structure.

Caught off-guard by the relative underground success of their opening gambit, Can were ill-prepared to deliver a swiftly-assembled second set. As the pieces on Soundtracks (1970) confirm, Can had already provided enough material for two 12-inch sides through various arthouse movie commissions. So Soundtracks was issued as a stop-gap, while the quintet worked on that second album proper.

Though inevitably less focused than what would follow, Soundtracks demonstrates that Can were just too well-formed, too distinctive, to just offer literal audio-decoding of another’s plot and movement. Again Karoli is the most singular player, the episodic freakout of Mother Sky a fan-favourite. She Brings The Rain, like Frank Sinatra on psilocybin, underlines the band’s versatility.

The actually non-existent Rough Guide To Can would no-doubt point newcomers to Tago Mago (1971). Named after a rock in Ibiza, a kind of blarney stone for metaphysical types and occultists, Tago Mago is the Can of legend, and represents a quantum leap in turning kinesis into an art form.

Jaki Leibezeit, a fair candidate for the rock’s finest practitioner of the percussive arts, locks the group into an endless spiral of groove that separated Can from the (mainly British) classicists that peopled that peopled the lofty edifice that was Progressive Rock.

However, the Can neophyte should tread carefully. The sub-sea dub of Aumgn and tricky Peking 0 are no place for the faint-hearted, and visitors may wish to pack their Krautrock kompass to guide them through Tago Mago’s deceptive topography.

With Ege Bamyasi’s (1972) Spoon, the band found themselves as unlikely hit-makers, with the single hitting the top of the German charts. Unusually, quality wasn’t sacrificed in the name of accessibility. Rather Ege Bamyasi cemented the impression of Can as one single being, a five-limbed ball of syncopation and industry.

Though touted as a motherlode of inspiration from indie heroes from Mark E Smith onwards, Can and Ege Bamyasi resist copyists. Whether its the jittery, flexi-funk of Pinch or the incantations of Sing Swan Song, Ege Bamyasi is a subliminal work, fresh from the Id, defying Rock’s chest-beating impulses and demanding the kind of well-rehearsed ‘chops’ that most bands can only dream of.

Also, beyond his Canaxis work with Rolf Dammers, Ege Bamyasi is the first officially released Can work to begin to define Holger Czukay’s ambition to produce a universal music that elides ethnic identity.

That’s possibly one reason why the next Can release was called Future Days (1973). Though buffeted by the profits of Spoon, the band wasted no time in pushing the group’s improvisational understanding further. Just like Ege Bamyasi, Future Days re-writes time, existing in a place where growth and decay are unknown quantities. There are no jetpacks on display. Future Days speaks not of Pocket Calculators or programming home computers. Can never offer easily decoded narrative. Feel, instinct and intuition communicate the Can philosophy, indeed they are the philosophy.

Damo Suzuki left the band to become a Jehovah’s Witness…

Spray echoes Miles Davis‘ contemporaneous appropriation of politicised African and Afro-American rhythms, but as dialogue, not as emulation. If played on drum computers, Moonshake would have created Electro.

When Damo Suzuki left the band to become a Jehovah’s Witness (though he recently toured Europe), Can were left in some disarray. Karoli took over the vocal duties, initially in a similar style to Suzuki’s, but for Soon Over Babaluma (1974), Can’s improvisational style flourished without the need for the centre-point of a singer.

It is Soon Over Babaluma that benefits from the re-mastering process most demonstrably. Less limber than its predecessors, the record’s viscous layers demand greater detailing.

In many ways, this record is a nexus, a crossroads of stylings to come. The traces of Disco, House, Ambient, Trance, Dub, and Post-Rock (feel free to add your genre of choice) can all be found within its scope. Indeed, particularly within the spaced out ruminations of Come Sta La Luna, there are innovations yet to be fully plundered.

Once you’ve glimpsed a golden future, it’s disappointing to be dragged back to a less beguiling past. Now signed to Virgin, the live feel of Landed (1975) makes more sense when positioned near the dawning of Punk (John Lydon being a vocal advocate of the band). Though the primitive energy of Full Moon On The Highway operates on a baser level than the glory of Can classics, their radar was still alert to shifts of attitude, shifts of thought. The icy demeanour of Hunters And Collectors is as much an invitation as Kraftwerk‘s Autobahn for the art wing of strung-out Anglo-American rock stars to investigate this new Germany and re-write the rock rulebook. A new career in a new town, perhaps?

As odds and sods collections go, there’s little better than Unlimited Edition (1976). Can’s leftovers are another’s caviar. Unlimited also offers a rounded view of Can’s Ethnological Forgery Series (called EFP on various tracks on this compilation), where Czukay’s interest in assimilating the rituals and disciplines of South-Vietnam or African music into one holistic centre fall into sharp relief.

Sometimes inscrutable, but mostly enthralling, Unlimited may be Can with their pants down, but it only extends the myth of Can as a beast of spiritual force. Like the Galactus-like being that adorns the cover of Monster Movie, Can often seem beyond good or evil. If any band were a force of nature, it is this one.

Canned for your Convenience: musicOMH’s Can Top 10

1. Yoo Doo Right (Monster Movie) – Czukay’s bassprovides the lyrical underpinning to Mooney’shigh-register intonations. By the time its 20 minutesare over, you’ll believe that by the simple expediencyof rhythm, the secrets of the universe are just achant away. For true spotters, Bobby Gillespie liftedthe lyrics almost wholesale for Primal Scream‘sMovin’ On Up.

2. Mushroom (Tago Mago) – Can were progressive rock inthe sense that Parliament were a soul band. JakiLiebezeit is a drummer in the sense that Picasso likedknocking togther the odd portrait.

3.Halleluhwah (Tago Mago) – 18 and a half minutesof rainsong that sounds remarkable by its brevity.

7. Bel Air – (Future Days) Another recipe from thesame eclectic kitchen. If Bel Air were edible, you’dlook for it in the organic section.

8. Dizzy Dizzy – (Soon Over Babaluma) Trancespacewalking across Jamaica via the Amazon. Music asHypertext.

10. Transcendental Express (Unlimited Edition) – Moreodd than sod, this 1975 leaf from the back pages isall koto-chug and steam-powered absorption.

This feature was published in 2005.

Can MP3s or CDs

More on Can
Spotlight: Can