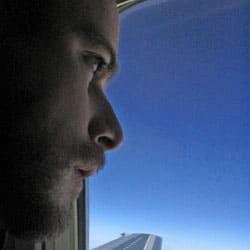 London singer-songwriter Owen Duff has either come up with a brilliant ruse to promote his work (which has flown way, way under the radar up until this point) or is making a valid point about the thoroughly confused and confusing way in which we ‘consume’ music.

In August 2008, Duff set about writing and recording 20 two-minute songs in four weeks (hence the title of his resulting album, 20 Two Minutes 4 Weeks).
A limited number of copies of the album have been hidden in London and other cities around the world, with clues as to their whereabouts posted regularly on the singer’s blog. The album is not available through any other means.

Several factors come into play here, most notably the speed of the recording sessions and the unusual distribution process. Like all back to the wall projects there is a certain hit-and-miss feel to the album, which is exacerbated by Duff trying several different musical styles on for size. When he hits the mark (The Race, Codebreaker, In Thrall To Tall Buildings And Sky) he is very, very good, his floaty tenor and cryptic lyrics evoking a sense of mystery that is reminiscent of Radiohead and Sufjan Stevens.

But it is the distribution of Duff’s album that really piques the interest of the reviewer, because the way we write about music hasn’t changed with the times. A great tag line makes an interesting pitch, and this idea certainly has meat on the bones.

In this day and age of instantly accessible music (legal/illegal downloads, ring tones) the unfortunate result is to devalue the nature of the artist’s work. Who would have thought Ray Davies and Prince, two of our great songwriters of the modern era, would have been giving their music away for free with Sunday newspapers? The net result is that too often music does not reach out to the wider audience the artist intended; instead it becomes as disposable as a Sunday newspaper, thrown out with the rubbish on a Monday.

What I love about Duff’s project is the air of mystery it restores to the art of listening to music. When was the last time you remember the thrill of discovering something new that hadn’t been blasted all over the internet within a few hours? For thousands of others to download, store alongside their 25,000 other tracks, and then forget about.

Despite this welcome sense of mystery there is an unavoidable problem with Duff’s project. How long before the album is uploaded to a torrent site for easy access? Digital music, by its very nature, has a permanency that other music formats lack, and with a groundswell of interest in Duff’s treasure-hunt ruse it may not be too long before 20 Two Minutes, 4 Weeks is easily available to all.

The flexi-disc springs to mind here as the last great piece of ‘pop art’. What was originally intended as a cheap gimmick (lousy sound, trashed after a couple of listens), is now commanding high prices at online auctions. A throwaway piece of plastic now highly valued in a throwaway culture, the irony hits hard.

Maybe Duff should try releasing his next album on flexi-disc? It would certainly serve to make his music a rarer commodity than in its present format.