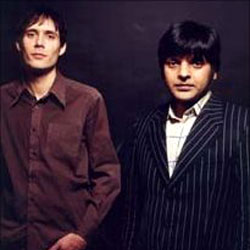 With new LP Handcream For A Generation out soon, featuring Noel Gallagher, original Oasis bassist Paul McGuigan and Otis Clay, Cornershop are back after what seems like too long. The band, who hit the top of the charts with Brimful of Asha five years ago, is gaining much critical praise for the new LP.

We caught up with Ben Ayers, one half of Cornershop, for a Q&A sesh encompassing working with Oasis, coffee houses and their general worth… and Preston.

musicOMH: What have you been doing since Brimful Of Asha and Sleep On The Left Side?
Ben: Quite a lot, really. We were touring Cornershop round Europe and America up until the end of the summer of ’98. Then we decided we needed to, at last, record the Clinton LP. We’d wanted to do this for sometime. That took some time and we then spent some time promoting it, during which time we did some DJ-ing, playing mostly music that has inspired us over the years. Then a little after that we set up our own label Meccico Records with a view to putting out vinyl mainly releases of any acts we saw around that excited us, plus some white labels here and there. We then signed The Toes to Meccico and put out a series of releases – doing all the production, label managing, radio promotion, press, everything – ourselves. We put out three EPs on seven inch and one CD compilation. Priorto that we’d put out a Clinton seven inch ourselves too, on Meccico – David D Chambers. There was a fair bit of overlapping with these activities too I might add, but then eventually we came to thinking that the time was right for us to do a new Cornershop LP.

musicOMH: How did the album come together?
Ben: We started to rehearse some of the more guitar-led tracks, and then begin work in the studio on the others. The album recording took place within roughly the space of a year, but with much time out of the studio. Basically it was a few days in Preston at the studio we use there called West Orange, then a few days back in London at home, again and again for weeks. We’ve always found referencing the tracks, in their unfinished form in the car on the motorway, a good way of listening, getting ideas. Then the same but using the London studio called Eastcote. The album was completed finally, in early June last year and then scheduled for spring release!

musicOMH: What are your touring plans for this year?
Ben: We tour the UK from April 14th (starting in Norwich) until April 24th, then tour the USA starting with a gig with Oasis in Las Vegas on April 26th through until May 28th, playing at some Hells Angels Festival in California… then play some festivals during the summer in the UK, Europe and Japan. We’ve also a second single release from the album planned for early summer.

musicOMH: Who’s been involved in the new album?
Ben: We were joined in different capacities by Rob Swift, Otis Clay, Noel Gallagher, Jack & Kojak of The Nazralites, Doreen Edwards, Paul ‘Guigsy’ McGuigan, Julian Arguelles and several others of local note.

musicOMH: How did various current and former members of Oasis come to be involved with the new album?
Ben: Because we all got on well on the spring ’98 North American tour we did together, Noel was playing bass on Jullandar Shere most nights, and we got on really well with Guigsy. Noel was keen to do something with us in the future and nearly did on the Clinton LP, but Spectral Mornings was a good one for his guitar stylings. We knew Guigsy would rock the bass onRocky and he did.

musicOMH: Can you run us through some of the new tracks?
Ben: I think that would be giving away the potential surprise – all I’d say is, there’s a few surprises, a whole lot of bass, some good rockin’ and a portion of Roots.

musicOMH: What do you think of So Solid Crew in relation to “the British music scene”?
Ben: I think it’s good they’ve got attitude, sad they’ve got guns, and necessary that they’ve got the tunes right now. But to be honest, give me The Streets any day.

musicOMH: What’s Preston like this time of year? 😉
Ben: Grim. Really cold. We’d don’t really go out when we’re in Preston recording, unless it’s to kick a football outside against the wall. We just ‘take up a residency’ at the studio – round the clock, work, sleep, work, food, work, sleep, that sort of thing.

musicOMH: In view of your ceremonial burning of Morrissey‘s pictures, have you met and/or been reconciled with him?
Ben: We’ve never met him, no. But he has recently said that When I Was Born For The 7th Time was one of his favourite LPs of the last 15 years, and he did once ask us to support him on tour.

musicOMH: Can you change attitudes through music?
Ben: Yes I think you can, but I think its a gradual thing, just look at the impact that music from the past has had in changing peoples views over the years, I think historically its been music thats actually lead the changes that have followed in society… hang on, there’s a book there!

musicOMH: Is anything in musical technique really revolutionary any more?
Ben: As long as there’s a norm to go against there’ll always be a route for the revolutionary.

musicOMH: You’ve toured with Beck and Oasis and worked with Fatboy Slim. How do you top that level of commercial success?
Ben: By not thinking backwards, but rather concentrate on the forward.

musicOMH: What do you do when not working on your music?
Ben: I’ve developed a compulsion (that I don’t particularly like) to read any available newspapers… I listen to music a lot, and play dinosaurs with my son Dylan and daughter Molly.

musicOMH: How did you know you wanted to be musicians?
Ben: We didn’t – it’s all a mistake.

musicOMH: Coffee shop chains – good or bad thing?
Ben: Chains would be bad and sad, one-offs with individual character would be better. I love a good cappucino.

musicOMH: What does it feel like to be at No 1 in the singles chart?
Ben: Weird, in a word. But good too. We were in Glasgow when it happened, a good place to be.

musicOMH: What are your plans – if any – for Clinton?
Ben: Haven’t thought about that at all to be honest. We’ll see how we feel as things develop.