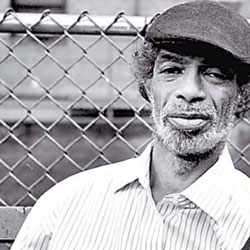 Gil Scott-Heron was, for much of his life, more legend than man. Especially in recent years, past the height of his ongoing revolution – in LCD Soundsystem‘s decade-defining Losing My Edge his name becomes a hook, landing right between the mythical Electric Prunes and the forever elusive Slits. His poetry and persona earned him plenty of hyperbole; the black Bob Dylan, the godfather of rap.

The grandmasters of the scene today, the Commons and the Chuck Ds, are quick to accredit him with a spear of influence. But away from all that, Gil the man constantly, if not consciously, demanded the respect of anyone interested in American culture, for his music and words rang hard and true and while his history pointed to an early death, his unyielding idiosyncratic art will maintain his immortality.

As far as post-mortem tribute pieces go, the life and times of Scott-Heron is destined to be written about in a vast cross-section of the music press. Eulogies elsewhere have already encompassed the predictable touchstones; his modest upbringings, his early promise, his poetry, his genius, his music, his classic early records, his drug issues, his imprisonment, and of course, his recent rebirth. His is a history lesson close to unique in American music. Gil never slinked to one side of the dichotomous script of the protest hero, he never burned out or fully transcended his vices. His life was a bright modern account of a life dedicated to change. Through that consistent obsession with intention, his urge for social restructuring, and the genuine unflattering transparency of his relatable substance issues, Scott-Heron has become a traceable musical symbol for a wide demographic of restless African Americans. The outpouring of appreciation after the confirmation of his death was a testament to the number of people who not only look to him as an influence, but as the chairman of a tradition of activism which continues, both artistically and objectively, to this day.

But it always seemed Gil never wanted such acclaim. He regarded himself simply as the voice of the troubled, revealing his own drug issues candidly in his art. He never begged for divinity, never appeared to worry about money, and always referred to his songs as products that came from a we not an I. As his friend and boss of XL, his record label, Richard Russell put it: Gil shunned all the trappings of fame and success. He could have had all those things. But he was greater than that. To my knowledge he never accepted an award. He always wanted everyone else to receive credit for their work. He is the only artist I’ve ever worked with who requested that the studio engineers photo be given equal prominence to his own on his website.

Of course that gives an all-too glorious sheen to the life of Scott-Heron, and it leaves out the dubious parts of his career, the less-than-stellar records, the drug stints. We are talking about a man who spent the last decade of his existence bouncing between jail time, arrests, parole violations and rehab on a nearly year-by-year basis. But unlike plenty of elder embarrassments, Gil was always a guy you could root for he incorporated his public issues into the heart of his art, never making his problems into anything but a personal issue. As he sang on Home is Where The Hatred Is, Home is where I live inside my white powder dreams /Home was once an empty vacuum that’s filled now with my silent screams /Home is where the needle marks /try to heal my broken heart. His articulation, elocution, and general good-hearted respect for those around him cemented his perennial public adoration.

Gil’s death certainly does have a more sudden punch to it considering how last year’s comeback I’m New Here manifested as a resurgence of the man’s prowess. It was a brittle piece born out of trouble, and centerpiece New York Is Killing Me now has a darkened foreshadow hanging around it. But it also captured Scott-Heron in a place of permanence. His words still fierce, fiery, well-selected, and indelibly paced; his voice, although cracked under the weight of years and addiction, still came from a place of punching wisdom. Gil Scott-Heron needed no reintroduction; his seat, though vacant for 16 years, was still awaiting its owner.

His career has spanned jazz, funk, dance, spoken word and authorship but his voice has sustained its critical and irreplaceable place in history. The catchphrases and mentorship will be most remembered, but the abstract, almost spiritual nature of his presence will be the most missed. If it’s difficult coming to terms with Scott-Heron’s mortality, it’s because the man lived like the fight was never over, his promises never completely fulfilled, his artistry never tapped, and his work never done.