Sofyann Ben Youssef on his India-inspired new album Global Control / Invisible Invasion, the relationship between his music and the nightclub, and his changing listening habits 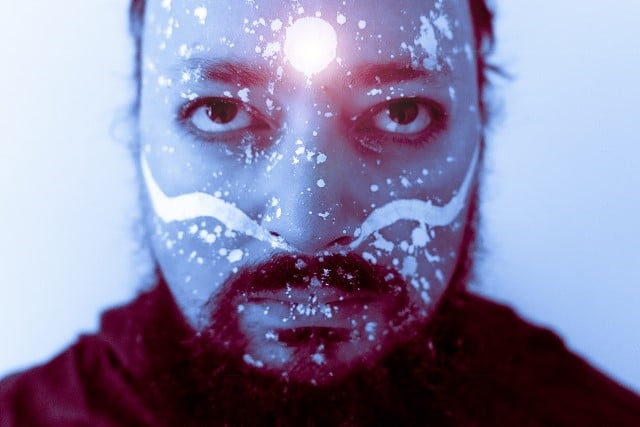 Brussels-based Tunisian electronic producer Sofyann Ben Youssef, the man behind the AMMAR 808 name, is in the middle of what will prove a typically thoughtful and wide-ranging reflection on the role of music both in his life and in the world in general. Our conversation might be primarily centred around his new album Global Control / Invisible Invasion, but this is one of several moments in which he elaborates on music and creativity in a broader sense.

That he is so immersed in music should come as no surprise to anyone familiar with his background. The first AMMAR 808 album, 2018’s Maghreb United, was an extraordinary exploration of North African music through a 21st century lens, taking traditional sounds and voices and repositioning them in a contemporary, electronic, bass-led setting. As an album it was stark, impactful and exciting – traits that are carried forward to Global Control / Invisible Invasion.

For this album, Youssef spent time in the Indian city of Chennai to further explore and deepen his interest in Carnatic music, capturing the sounds of local musicians and vocalists and synthesising them into a rich, pulsating sonic tapestry.

Youssef had studied in Delhi when he was younger but he explains that his interest in Indian music began when he still lived in Tunisia. “My interest in Indian music started through a Pakistani sitar player called Ashaf Sharif Khan. That was my first encounter with that instrument. I was studying musicology at university in Tunis. I was attracted to the music and I wanted to understand it. I was hearing the tabla rhythms and it was a brand new musical universe for me. I had no idea how it all worked and I wanted to learn more about it.”

“Carnatic music is already rich, it doesn’t need me to make it richer, so it was more about finding new ways to propose something else”

He moves on to talking about his interest in Hindu mythology, another key influence on the new album. Did he have a clear vision of what he wanted the album to sound like before travelling? “I had pretty much half of an idea. I had an interest in storytelling so I thought I would take the lead from there, follow the stories and see what sort of music comes with it. In the beginning I was interested in knowing more about these Indian epics and folklores, these almost sci-fi type stories. I researched a lot of ancient Indian texts before going. They describe these big battles involving various gods and heroes and when I was reading those things it felt like I was reading a science fiction novel. That stimulated me and I wanted to know more. You follow up on a lead and it takes you somewhere, then somewhere else. I never know where I’m going in advance, I try to do as little projection as possible. I don’t pretend to know everything about Carnatic or Indian music, although I’ve been studying it for almost 20 years.”

What drew him specifically to Chennai as a destination? “I was interested in Tamil culture. I’ve been to Delhi before where I studied but that has different music, Hindustani music. This time I was more attracted to the southern culture, the Carnatic music of the south. The musical choices and styles here had something different to offer, something different to explore. I wanted to focus on styles that are not popular outside of India”.

In particular, he was drawn to Therukoothu, the ancient Tamil storytelling art form where music and dance are combined, quite often in street performances. “The Therukoothu art is like street theatre and is not something that is very well known outside India. I wanted to bring these things out. The first time I heard one of these Therukoothu performances I was like, ‘wow’. It’s like hip hop, when they get into that flow and it starts to hit. I tried to get in touch with people who were doing this and I got super lucky with contacts. Everything felt like it was meant to be and it happened very quickly. Carnatic music was an obvious choice – for me as a musician, playing with Carnatic elements is challenging. It is already rich, it doesn’t need me to make it richer, so it was more about finding new ways to propose something else and I think I managed it.

“All of the recordings were made in the studio of Paul Jacob, a fellow producer based in Chennai. He helped me in finding the right artists to work with and getting in touch with them, sometimes even doing translation and he offered his space to work from. I had all of my equipment ready for mobile recording. I had microphones, cables, everything. In the past I had a lot of bad experiences with equipment failing and I didn’t have time to find equipment so I wanted to be totally independent. Just show up somewhere, open my bags, plug in and be ready to go”.

“The album was the fruit of many years of both passive and active research, listening, practising and playing”

The results are striking. Local singers Susha, Kali Dass and Yogeswaran Manickam lend their vocals to tracks on the album and Indian percussive instruments like the mridangam, kanjira and thavil are added by Thanjai Nayandi Melam. Everything swarms intoxicatingly around Youssef’s driving beats and bass. One of the most immediate qualities to the album is its intensity and energy. Given these are things found in abundance in India, I wonder if the nature of the country itself influenced the music in any way?

“Yes and no. I’m always looking for intense rhythms, I’ve always been into intense music. India had so much of that anyway, Indian music is so intense and you have so much choice when it comes to rhythm. Working on a full range spectrum, with the bass and the subs, it gave me a whole new playground to play with, especially with regard to the architectural and mathematical aspects of Carnatic music”.

The more we talk, the more Youssef reveals about his creative process. “For me, it’s important to understand what I’m working with. I cannot work with music that I do not understand. The album was the fruit of many years of both passive and active research, listening, practising and playing. For me, it was very important to dive into it with knowledge of how it functions and how its centres of gravity are balanced. I’m not in the approach of working with samples, I have to record the music I’m working with. With the recordings I can influence things and make suggestions”.

As he talks he continues to draw parallels with more abstract concepts and make wider, geographical connections. “Hindu mythology gives a space to explore ideas, to reflect on ideas like free will and freedom. There was a paradigm change when the (Arab Spring) revolution happened across North Africa. For me, the first thing that changed was the meaning of several words like freedom and democracy. What we called freedom back then was not really freedom. Now, there is a new meaning to freedom. All these words have a dynamic range, they are not fixed and that followed me out to India where the mythology gave me space to reflect on these things”.

Tracks from his last album Maghreb United often found their way on to the dancefloors of Europe, perhaps not surprising given their electronic and beat-driven nature. Is that a consideration he has in mind when making music? Is it important to him for people to have that physical reaction to his music?

“Physical experience yes, but I’m not sure about club context. That’s not a priority for me when producing. Club music has a very strict format and I’m not so much into that. My music might sound like it belongs to that context but it’s not intentional. I translate my albums into club music when I play a live performance, at least this is what happened with Maghreb United. That album was danceable of course, but the main goal was to find relationships within these types of music and find these hidden dimensions that are just sitting there, waiting to be used.”

“For the forthcoming album, it is exactly the same but maybe even a bit further. There are a couple of tracks on this album that I really have trouble imagining on the dancefloor. I might be surprised, it’s a whole new area to test. What music can be (successful) on the dancefloor? If there’s a limit on what can be heard on the dancefloor, maybe we can try to push it and explore how eclectic it can be?” It’s interesting to hear him talk about eclecticism – by turning his musical focus from North Africa to India does this show an artist who wants to keep changing and reinventing? “Absolutely, otherwise I would get extremely bored.”

One consistent presence in the music of AMMAR 808 is the sound of the TR-808 drum machine (after which he partly takes his stage name). How did his relationship with it begin? “I’m a late bloomer when it comes to electronics. I discovered this very late and totally by accident. I was introduced to one of these in the studio and then started fiddling around and then there was this epiphany where I realised this is something I can see myself on stage with. Before I was just a keyboard player, a piano player, a hardcore musician, and then you discover something new and there is no way back. It changes your whole perception”.

As someone so preoccupied with music is he a big listener/consumer? “I was a big consumer of music until my 20s but somehow it stopped. I think when you are aware of the influence (of other music) you become a very careful listener. I prefer the fantasy that is transmitted through the one time listening to something rather than listening to the same thing 30 times and knowing what is exactly happening in a critical, analytical way. I’m more interested in the fantasy and the colour than the precise memory of a track. I developed this technique of listening where I find something I’m actively interested in, I listen to it one time and then forget about it. This track then gets mixed with my subconscious, with my creativity, my imagination, to create a completely new thing. I get inspiration from almost everything else other than music. Something interesting always happens when ideas are translated into music, whether from philosophy, astronomy, Indian epics or science fiction”.

Global Control / Invisible Invasion offers perfect proof of this – a dynamic coming together of different musical worlds, and almost certainly one of the most distinctive albums of the year.

AMMAR 808’s album Global Control / Invisible Invasion is out through Glitterbeat on 18 September 2020. Tour dates and further information can be found here.