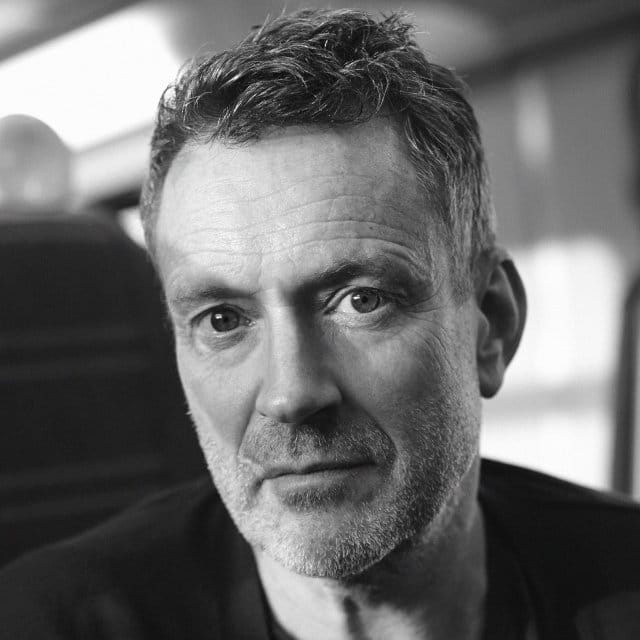 2017 is turning into a very good year for the duo whose name is a wobbly dessert. Blancmange began their work together in 1978, and almost 40 years on Neil Arthur and Stephen Luscombe are looking back on their career through a number of different lenses. The widest of these, The Blanc Tapes, is a wide-ranging compendium of the original albums Happy Families, Mange Tout and Believe You Me. It is a nine-volume box, replete with alternative mixes, live tracks and rarities.

Yet for Neil Arthur, carrying the Blancmange name in a solo capacity in the wake of Luscombe’s recent illness, this is only part of the story. The last few years have seen a creative renaissance of the Blancmange name with six more albums, culminating in Unfurnished Rooms, due at the end of September. Meanwhile Arthur has a side project or two in the mix, headed by the well-received Fader album First Light, made with Ben ‘Benge’ Edwards, studio lynchpin to Gazelle Twin, Wrangler and ‘The Maths’ to John Foxx.

There is lots to talk about, and as he freely admits, Arthur is partial to a good conversation. How did he come to work with Benge? “We met through my manager Steve Malins,” he busily recounts, “who had heard some ideas Benge had recorded in London. He introduced us and me to the music. I like to keep myself busy, and Steve felt this was something I could easily do. It’s great fun doing it, it’s obviously hard work but to work with people like Benge is amazing too. Fader was a really nice exchange of ideas, it seemed to work really well. We were working at distance, but everything seemed to click and make sense, like it was meant to be. We actually met up for final tweaks, but that was only the second or third time we had actually met. There were a lot more than three emails though, I can tell you.”

First Light is a blend of 1980s electro and more forward looking statements embracing the trappings – good and bad – of modern life. “I hadn’t really thought about the 1980s as such,” says Arthur, “but the synths we utilise are from then and before. It wasn’t a conscious effort though. The music I was sent knocked me sideways, it really inspired me, and the lyrics I had written down fitted in. I would complete that part of the work and then Benge reacted to it. We were definitely looking forwards rather than back with the music.”

“I’m all for a cacophony at times but appreciating space is very important too. That is also a reflection on everyday life.” – Neil Arthur

A choice cut from the new album is Check The Power, an intriguing song with a nagging voice, imploring you to check you locked the door on leaving the house. Or did you? He laughs, but checks his response. “It’s not funny, but it’s how it was meant to be. It’s a state of mind and life.” Would this be the first such song? “Possibly – I’m not sure if it’s been represented in song, but it’s another way of saying the same thing. One of my ways of looking at music is to see how little can we get away with. I’m all for a cacophony at times but appreciating space is very important too. That is also a reflection on everyday life. These things, these little ticks, as well as the more significant things, make the difference between us all. It’s the sound of anodyne, the word play on knowing what it means, you can twist it around. I do like to sing about things that are in between, the every day.”

First Light closes with Laundrette, a song without percussion that appears to be based on a deeply affecting personal experience. “Sometimes things we worked on were fractured, cut up, and pasted back together. Some are personal, with elements of fiction, but parts of the real thing are absolutely in there. It’s a bit like looking at a painting if the artist stood in front and explained everything you’d never look at it,” he says enigmatically. “It’d be a mess if we told the story the wrong way round. When Ben sent the music through it took me to a place. The laundrette does exist, it’s a beautiful place – and it had this motion, the revolution of the washing machine drum going round. I got an image of the scenario I was trying to describe – and it is a real place in Stroud, at the bottom of Nelson Street.”

“It would be nice to do a film in time for a song,” he considers, “though that is a bit tongue in cheek as I was laughing at where Blancmange started – with the EP Irene & Mavis, which was about these two old dears who made avant garde music. We told the story they met in a laundrette so I had a laugh at it.”

Arthur also worked with Benge on Unfurnished Rooms. How did the co-producer influence its sound picture? “It was fantastic when he said he was up for getting involved. I’d written the songs and a lot of instrumentation. I put my electronic noises on, and the idea was for Benge to replace the rhythm area. Where we had done that he was keen to embellish the drums with real analogue sounds from the Linn and some modular stuff – a Moog was used. We did that and went way beyond, what with the technical sounds and having him mix it. He’s got the most amazing studio and is the most gifted producer – knowing what he doesn’t know isn’t worth knowing.”

The band’s original character was firmly retained. “It was a very different kind of result – not Fader and very much Blancmange which is a very nice thing. He was an absolute delight to work with. I tend to start on a guitar, or a basic synth sound – thinking less is best (though not when I talk!), but you come up with a situation. We’d be looking at things like the new song We Are The Chemicals. There is a nice rhythm unit but when he plays analogue electric drums it brings a lot more space to the sound. That collaborative process was really important, to have his input on those things.”

More recently Benge has worked extensively with John Foxx, but Arthur is happy that there was “no stepping on each other’s toes, we had space to do what we do and it was intuitive. I was like a kid in a sweet shop in his studio! We chose the synths we were going to use.” Meanwhile John Grant has lent his tones and piano playing to the album’s closing track, Don’t Get Me Wrong. “John recorded his part in Iceland,” says Neil, “so I didn’t really get to meet him. When I wrote that song I knew that Benge and Wrangler were working with him. I heard through the grapevine that he really liked Blancmange, which is lucky! I think he is a fantastic singer and lyricist so I thought, ‘Why don’t I ask him?’ My piano playing, even when it’s multi-layered, is all one thing at a time. I sent a song to him and he said he’d be honoured, and sent the results through – and it was far beyond what I imagined. People surprise you and he did with that. He sent a few very interesting text messages beforehand, and then the vocals.”

“I heard through the grapevine that he really liked Blancmange, which is lucky! I think he is a fantastic singer and lyricist.” – Neil Arthur on collaborator John Grant

We move on to explore the intensely personal process of researching the material for the Blanc Tapes, and particularly the memories revived by the early demos. “A few cans of worms were definitely opened, and there were some strange skeletons. The packages have been put together for over two and a half years, and as part of the process I have had tapes digitised. I went through a lot of stuff to get it right, and it was all on tape – hence the Blanc Tapes.”

There were some surprises, too. “There was one particular song that I only found rehearsals for – Your Hills. As soon as I heard it – the noise, the hiss – I knew exactly what it was, and everything came flooding back. It was quite moving and labour intensive, making sure of the right tapes and mixes. Stephen’s not well but he said he would like to have the tracks passed by him. I speak to him a lot, and see him often. We came across stuff from before we signed a deal, from the late 1970s – 1978 I think, when we began. It was another means of expression and never for a moment did I think it would be a career! We thought we would be illustrators or something.”

There was still time for musical discoveries in the group’s down time, however. “After Blancmange, we had an opportunity to do films for adverts. I did some documentaries and found you were employed not just to make the soundtrack but trying to work out where the spaces should be, finding the natural silence and sounds of a documentary. More and more I found that people want wall to wall music. Never mind the chords, feel the width.”

Arthur has a wealth of musical plans in his immediate musical future. “I’m working on a project with Jez Bernholz (of Gazelle Twin), and for that we are using field noises, generating noises that come together. We are mixing an album for release next year – it’s yet another project!” This is indeed an unusually prolific time, even for Arthur. “Part of this is because I work through Steve (Malins), who encourages me to lend out some of my ideas a bit sooner, introducing me to people that it’s just an absolute pleasure to work with. I do write a lot but I wasn’t always sure what to do with it. I used to try and fill the bits in between but now I don’t, and I’m finding it easier to say that’s enough. I am really enjoying that and I’m happiest when I’m busy. I’m not very good at being still.”

Blancmange’s album Unfurnished Rooms is out on 22 September 2017 through Blanc Check. Tour dates and further information can be found here.