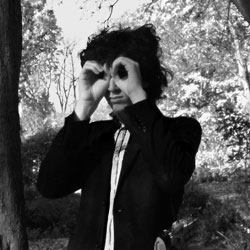 While his more mainstream contemporaries bleat on about mouthwash, spitting at stars and, erm, pavements, Ben Garrett aka frYars is doing something altogether different.

His electronic-tinged chamber pop has been whipping up a storm amongst critics and bloggers for months, since stunning Luke Smith (ex-Clor) produced debut The Ides EP was released in October 2007.

The 19-year-old behind this cleverly-constructed music is quietly spoken, reflective and ever so polite when we catch up with him in his London home one rainy Sunday afternoon.

It’s not what you might expect from someone whose talent has been so wildly lauded and celebrated early on their career – in fact newcomers who have accomplished much less have been known to chatter on arrogantly about themselves for far longer than Garrett does during our encounter today. As a result, he is a joy to interview – passionate, considered and friendly throughout, and displaying a charming shyness and self-deprecating wit that would win over even the most cynical industry sourpuss.

The curly barneted teen is fresh out of sixth form, abandoning plans of further education to focus on music full-time after his MySpace demos attracted a flurry of interest during his final year at school. So what does he make of his time in the biz so far?

“I feel like I’ve been doing this for ages but really I’ve only played two gigs and put out a four-track CD which isn’t a lot,” he chuckles. “There hasn’t been any ber-hype yet thankfully… just a few strange pieces here and there.” Are there any in particular that spring to mind? “Hmm, well I definitely didn’t expect to have articles about me in the Daily Star and the Daily Mail. The Star just wanted to ask me about my song Madeline which was out during the height of the Madeleine McCann publicity. It was written a long time before that happened and was not at all about it but the writer still managed to make half of the piece about it,” Garrett laughs again. “Thankfully there wasn’t a huge storm about it – I don’t really want to be famous through stuff like that – but I don’t mind my music being mentioned in tabloids at all. Hopefully that means it will reach out to more people.”

With unabashed pop sensibilities mixing seamlessly with imagery-ridden, poetic lyrics, Garrett should have no problem appealing to a wide audience, and although he is currently readying a debut opus for release this year, he argues that is only the tip of the iceberg in terms of what he has to offer creatively.

“I have done EPs rather than singles so that people get a general picture of me but in the next few tracks it will change” he explains mischievously. “Until you have done six albums no-one has the full picture of what you’re all about. The first one will probably have about 18 tracks on it, and that is after a heavy filtration process. I’m recording it with Luke Smith and it sounds really interesting. It’s avant-garde I suppose but not in a stupid way,” he smiles. “I have so many songs that I don’t know what to do with them.”

I ask Garrett about the inspirations behind the songwriting on this forthcoming work and for the first time during our chat he becomes lost for words. “Oh I don’t know… can I get back to you on that? What I listen to really depends on my fortnightly mood and I listen to as much as I can,” he goes on to explain.

“But then I don’t sound at all like what I like. Umm, for me music is more about ideas. So when I reference things I don’t set out to sound like them, it’s more like I am referencing the production and noises from songs rather than the songwriting. I would say David Bowie‘s ethos and Serge Gainsbourg‘s ethos were inspiring, and I like Kraftwerk and The Strokes, but really I will listen to anything.”

Garrett has an equally intriguing approach to lyric-writing. “I usually write a script and then make song lyrics out of that,” he says. “They are either story based or philosophic and they are grounded in really complex metaphors which I don’t expect people to really understand. I guess it’s most important to me for the words to mean something, even if I’m the only one who knows about what they’re about properly. Words I hear every day inspire me,” Garrett adds, “and I think the best ones are lyrics that become part of the music, like with Gainsbourg again. There is a richness to them when combined with the sound even if you don’t understand what he is singing about.”

“I have so many songs that I don’t know what to do with them…”
– Ben Garrett, aka frYars, aged 19

Finally we talk live shows, as despite only playing a handful of gigs frYars has built up quite a reputation for his performances. At one of his appearances at The Slaughtered Lamb pub in London in late November he left the stage mid-set, in front of a crowd crammed full of important industry types to use the toilet. “I thought you might have heard about that,” he giggles.

“Those shows lasted an hour each and were very low-key and a bit like stand-up comedy to be honest. The audience were all sitting down and quiet the whole time and I had film of musicians accompanying me projected onto the wall, but for the shows this year it’s going to be very different. I’ve got a proper band now and I want to do nice, good gigs, rather than extensive hard sell touring.

“We’re also thinking about what we’ll do with the visuals,” he adds. “I like having them, it’s fun. I wanted to film a hamster in a cage and then project it onto the back wall, or have a camera on one of my band member’s heads and project whatever he is looking at on stage to take the attention away from me. We’ll see.”

frYars will take his unconventional live show around various venues in Spring before heading out on the road with Goldfrapp in June and July, and following that his only plan for 2008 is to “avoid tragedy and make interesting stuff”. With material of such a high calibre and individuality already on display, something tells us this bright spark has already got it in the bag.