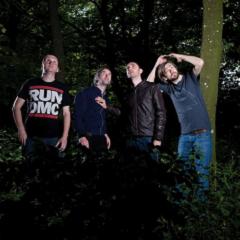 Let’s get one thing straight from the outset. Fujiya & Miyagi are not Japanese. It’s a popular assumption made by newcomers to the Brighton group, named partly in homage to a character from The Karate Kid.

Yet the reference isn’t completely off the mark; the quartet’s music has something of the Far East about it. And that’s certainly a long way from Sussex. So when we talk to the affable and quietly spoken vocalist David Best there is plenty fat on which to chew.

Best is feeling a little out of touch. “I haven’t had access to the internet of late,” he says. “It’s weird. You think it shouldn’t matter really but when you’re without it you’re thinking, ‘What do I do now?'”

As such he hasn’t seen much reaction to the video for the new single, Sore Thumb – a shoot of which his memories aren’t that great. “Yeah, it wasn’t that enjoyable to do to be totally honest! We were in this warehouse, dressed in leotards, and it was freezing. It was great working with Wade (Shotter, director), though. All his ideas were really good but required a lot of hard work.”

He acknowledges that Fujiya & Miyagi have built up something of a YouTube following, and recognises the importance of the videos to the band. “I think whether we like it or not they are important, as most people will see us in that way in the first instance. I’ve always liked bands with strong visual images, bands like Devo and Kraftwerk. Sometimes it takes us so long to do the music, though, it makes us forget that we look like plumbers if we appear properly on the videos!”

Sore Thumb has a story to tell. “Yeah, it’s about the guy best known as the Bonzo Dog Band singer, Vivian Stanshall“, Best says. “He did this solo album, but it sank without trace – it was the first time I can think of where an English guy had used African musicians, pre-Peter Gabriel. The reason I like it is because he’s viewed as quite wacky – when he was let go from his record label he left a pile of unhatched insect eggs on their radiators! So it’s bits like that I gleaned from his life, like the fact his biggest regret was not seeing the insects hatch!”

Best explains how Fujiya & Miyagi records don’t tend to embrace typical, pop-song subjects. “The last record was talking about the miniatures, the small things”, he says. “We don’t concentrate on big topics, you won’t find a song called ‘Home The Homeless’. People we like do that, too. Since Transparent Things, the last record, we’ve played around the world. Yet I find that I tend to write things that are influenced by aeroplanes, mini bars and stuff like that. I write about dishwashers. It’s the ramblings of one person stuck in a room.”

One place in particular left its mark on Best. “It’s pretty obvious but I fell in love with New York”, he gushes. “It’s funny, but when you’re not there very long you decide you like somewhere if the show happened to go very well. So I like Barcelona, and anywhere in Ireland – because of the crowd. In New York, we played in the Mercury Lounge, just a couple of hundred, but it sold out. It was a realisation then that people had heard of us. I enjoyed walking round, and felt really comfortable there.”

“I write about dishwashers. It’s the ramblings of one person stuck in a room”
– Fujiya & Miyagi vocalist David Best on the smaller things in life

He elaborates. “I think with the English, there’s a sweeping generalisation – we always like a loser. Yet when we were in New York I was really expecting things, I felt like anything could happen – it was like an episode from Friends, with all these positive feelings!”

As well as releasing Lightbulbs towards the end of 2008, Fujiya & Miyagi contributed a track to the Bomb The Bass album, Butterfingers receiving over half a million plays on YouTube. West talks through the experience. “He sent over a beat, we put half a song on it and sent it back, and it kept going back and forwards until it was finished. I still haven’t met him, but I like doing songs and never meeting someone. It’s nice working with other people, because it’s theirs as well as yours. We’ve also just done a collaboration with some friends of ours from Project Jenny Project Jan, from Brooklyn.”

He’s enjoying taking the Lightbulbs album on the road. “It’s going good. We’ve been to America for a month, and it’s gone pretty well, down south in New Orleans – we played at Baton Rouge. Last year we got Lee (Adams) in on drums, and it’s really helped. It’s much more exciting; we find people tend to like it more. It gets a bit faster though, we were having dinner the other day and could hear some of our songs, and we couldn’t believe just how much slower they were! We’re trying to convert this live sound to our next record, how we’re touring it now.”

I have to ask – did Best and Steve Lewis really conceive the band on the subsitutes’ bench of a five-a-side football match? He laughs, “That’s a myth, that is. It bruises our ego as well, when people say that – we were definitely playing! He used to be in a band called Adorable, and he moved down to Brighton six months before I did. We went for a beer, and it emerged we both liked Can, while he was in to Carl Craig as well.”

He continues. “We were just going to do guitar, but then he said one day ‘Why don’t you whisper something?’. There was no plan, but that’s how our sound developed. The gestation period was very slow; I don’t even know how it continued – at one point we did one song in about three years. We worked in a cold storage tank to save up for a sampler, then we realised if we didn’t get something out there wouldn’t be any point.”

And do people still think they’re Japanese? “Less and less”, he says, “but initially that was our fault for choosing a rubbish name. Now when I have to say the name I think it’s just what we do. When I think of Pavement I don’t think of the concrete, after all.”