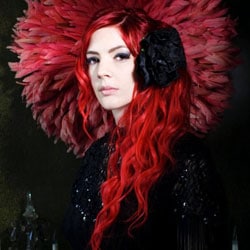 At the tail end of 2009, red crested chanteuse Gabby Young released We’re All In This Together, a vaudevillian jaunt under the band monicker Gabby Young And Other Animals.

An album as distinctive as its author’s strikingly colourful appearance, its release date – after magazines had gone to press with their end of year lists – seemed designed to underline Young’s independent spirit. This was not an artist playing somebody else’s game, but instead making her own space in which to be seen and heard.

Something of a carnivalesque cabaret, the album reels through folk, jazz and burlesque but never loses sight of those vital ingredients that make songs memorable – melody and hooks. Young’s musical inspirations prove to be as eclectic as her sound.

“My dad always loved jazz,” she says. “He liked the type of jazz that I don’t really like but it opened up that whole genre. I love stuff from the ’30s, people like Louis Prima, Ella Fitzgerald, Duke Ellington; what they created gets me really excited about music. I’m very into female singer songwriters: Feist, Ani DiFranco, Cat Power, Joan As Police Woman, Imogen Heap. I love Led Zeppelin and The Beatles. And classical. There’s something about classical music that creates a ball inside me that doesn’t know whether to cry or laugh.”

She says this with an enormous grin, peeping out of a big woolly hat that covers most, but not all, of a cascade of bright red hair. Young is devoid of rhinestones, makeup and the album sleeve’s hair candelabra today, but they usually play a big part in the persona. Are the image and the music equally important? Does one win out over the other?

“The music, definitely. I was training to be an opera singer until I was 18 but I was also a bit of a rebel. When I discovered Jeff Buckley and Janis Joplin and Joni Mitchell, I knew that was where I should take my voice. I fell in love with the idea of being a singer-songwriter and the next thing I knew, I was writing songs constantly and for many years I was a bit of a hermit, just sitting in my room with my acoustic guitar.”

That room is in Wiltshire, where Young is originally from. But where did she encounter the Other Animals that now comprise her band?

“Rory the trumpeter I went to school with. He was in my sister’s year and was very cool and I’m still excited that he’s in my band! The others I met all on the internet. The newest recruit, Yusuf who plays trombone, wrote on a Gumtree ad: ‘Anyone want a bone?’, and I just went on it because I thought it was funny. Turns out that it was a North London chap who was looking to play trombone in a band and he actually put on his ad ‘money is not essential,’ so I thought, ‘Perfect! You’re perfect for us. We’re an unsigned band; please come and join us!'”

“For many years I was a bit of a hermit, just sitting in my room with my acoustic guitar.”
– Gabby Young

The Other Animals now number eight. There’s also Jim on double bass, Adam on drums, her partner Stephen on guitar, piano, banjo and backing vocals – “he’s the multi-instrumentalist,” she says – Rosa on accordion and keyboards, Rory on trumpet, Yusuf on trombone and Charlie on clarinet. They’re from the four corners of England. Was London an inevitable step in the master plan?

“I first lived in London when I was 18, and I didn’t really like it that much,” she remembers. “I was in a funk band which was hilarious, and I loved all that, but I didn’t feel like I was doing exactly what I wanted. Then I moved to Manchester and kind of thought that I could be a singer-songwriter there… and started a funk covers band! And sure enough I soon moved back to my parents’ house.”

But then, a potentially career-ending bombshell hit her. “I found out that I had thyroid cancer. Once I got the all clear, I had to change my life and had to get back to London. And it opened up such a world of possibilities. So from a really negative place, from having cancer, I’ve come to a really positive place, and I’m really thankful for it.”

She’s brought her experience to her art. “I definitely have autobiographical songs. Too Young To Die is about my cancer. I’m trying not to be too obvious about it in the song, but I think a lot of people pick up on it straight away. We’re All In This Together is kind of eulogy, my version of a murder ballad. It’s about loads of different deaths that I know about, some of which were close to me and some that weren’t. And then summing it up by saying: ‘We’re all going to die, but we’re all in this together. None of us are going to get out alive, we’re all going to die in loads of different ways but we might as well celebrate that and enjoy it’.”

Celebrating and enjoying with her, Young’s fans can become Animals themselves by joining what would, in olden times, have been called a fan club. This being the 21st century, there’s a strong internet element to what Young does. Becoming a ‘Mole’ costs 12.50 whereas a ‘Tiger’ metamorphosis will set you back 65. Each echelon of membership comes with a package of perks and presents. The system helps to fund the band and also fosters a close relationship between Young and her fanbase.

“I definitely have autobiographical songs. Too Young To Die is about my cancer.”– Gabby Young

“It’s great having a loyal fanbase that you have the data for, so we can say, ‘Right, we want to go on tour, we’ve got Animals in Liverpool, Manchester and Scotland, so let’s go visit them’. We give them things like free gig tickets and they get a special prize draw every month, and video updates, and lots of things that you wouldn’t get just from buying a CD. I’ve always been the person standing by the merch stall and stopping people and chatting to them and going, ‘Where did you hear about us? Please enjoy the album!’ I find it really sad when people just walk past… it’s so impersonal.”

We’re All In This Together’s releasing label, Gift Of The Gab, is also a pretty personal affair. “It’s me, my mum and my dad,” she says. “My mum’s on the computer every day sending people CDs, my dad runs the business/money side of it and I’m the face. It’s a cool thing because I know they’re not going to try and change me and it’s amazing to have a free rein. Now we’ve got the Animals involved with the funding, we’re getting into something that we can hopefully manoeuvre into something big.”

Just don’t make the mistake of calling her ‘unsigned’. “I always call myself an independent artist instead. I feel like ‘unsigned’ has a bit of a needy tag to it.” Indeed, it makes it sound like you’re trying to get signed. “Exactly, and I’m not. I mean, who knows. I don’t ever want to close any doors. Because if someone does come along and has a big paycheque to make the kind of album that I want to make, which has orchestras and choirs and is made in a zoo or something, then I would have to think quite seriously about that!” she laughs.

“But at the moment I’m happy with where we’re at, and I don’t want anything to be different.”

Gabby Young’s album We’re All In This Together is out now through Gift Of The Gab.