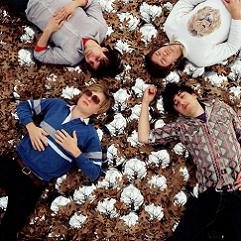 Ed Droste’s Grizzly Bear may be on to their third studio album, but up until now they have been relatively passed over in the UK. Yet a high profile deal with Warp Records, and that subsequent third record, Veckatimest, have taken curiosity to unknown heights.

It’s something the band’s drummer Chris Bear has noticed, their most recent visit across the Atlantic containing a far tighter schedule than before. Yet it seems things being hectic is a situation he relishes.
“It’s been going pretty good here, but it’s been very busy. I suppose that’s a good thing though! It was cool, especially doing the Jools Holland show, which we did the other day. It was our first live TV experience, and was actually far more nerve wracking than a live one! We did Two Weeks and While You Wait For The Others, and we really enjoyed it.”He goes on to explain the album’s unusual title. “Veckatimest is in the region off Cape Cod, it’s a tiny island near Ed’s grandmother’s place. We were away up there to her house a few times to record, and it was a really chilled out place to be, out of the city. When we considered the album title there were a bunch of old possibilities, but that name stood out.”

Given the ‘outdoor’ music the band write, it’s realistic to expect the Grizzlies to crave time out of the city, and it’s a notion Bear warms to. “We definitely do crave time away from the city. If there is any sort of consistency in our process in the early stages of writing, recording, or working on a new live thing, it involves us getting out of town. In town there are always complications – everyone has girlfriends, or it’s someone’s birthday party, but we thrive more when the four of us are living together, cooking together. It’s that sort of a vibe that worked for the record, and because everyone comes into it with different ideas and influences, living together with those things helps mould us.”

A real sense of community within the band comes through as he talks of the new record. “This one is definitely collaborative, in very different ways to Yellow House. We were all took a lot more in the development of the songs, and were involved in the very beginning. By the end most of the songs were pretty developed with arrangements, and as we were familiar and comfortable working with each other, we were able to give everything a shot.”

Bear finds himself busier on the album, nowhere more so than in the complicated fills of opening track Southern Point. “That put the drums a lot more at the forefront,” he confirms, “but it also came from the live show and what we’ve become as a live band. That definitely comes through in the record. Some moments on Veckatimest are exactly as we might play live – and there’s a lot of layering, more things going on. Yet technically there’s a lot less going on, track wise. I think it’s more focussed.”

They were approached by Warp well before Veckatimest came about, however. He takes up the story. “We had already started some of the songs for Yellow House, and someone contacted us having heard the first record. They wanted to hear the new one, so we sent them some demos. I was actually surprised to hear it was Warp, but it became clear they were starting to expand their catalogue and straying from electronica. We all have been fans of their back catalogue for some time, and there was something in the new eclectic approach that made us really pleased to sign for them”.

“We definitely crave time away from the city.”
– Grizzly Bear drummer Chris Bear on how the band keep sane – and do their recording.

More recently Grizzly Bear have worked with the Brooklyn Philharmonic Orchestra, an experience that culminated in a recent concert, over which Chris Bear enthuses. “It was a really great experience, and something we’ve been keen to try out for a long time. It was awesome to tackle the songs we haven’t played live, as some of them we’ve found we physically couldn’t create, as they have too much instrumentation.”

The band warmed to their task, though Bear says how it was “kind of scary, having 40 or so people behind you and having to interact with the conductor.” It raises a question of the Grizzly Bear sound itself, and how much importance ‘sonic placement’ has in their music. As it turns out, a lot. “We all get pretty detailed with the focus and the small little parts that come in and out,” says Bear, “and where they should sit – placing different sounds into a space. I think a lot of it is about the physical environments where we recorded things – making something in a small, tight room, or in natural spaces. In Massachusetts, up in the Cape Cod area, we were in an easier room, with a fire going. On some of the songs you can actually hear it crackling in the background! Then in upstate New York we were in a massive hall, and the drums sounded huge.”

With the success of Fleet Foxes, the feeling persists the timing of release for this third album couldn’t be better, despite the obvious stylistic differences between the two bands. Bear’s reaction to this is naturally a little more guarded. “We get that comparison sometimes, but we are of course pretty different. I think they make very nice music.” And on the album? “I don’t know how it’ll do, to be honest. We have had a little bit of a rough time in the UK before, but more recently it’s been slowly growing, but this trip – with Jools Holland and another BBC radio thing out at Maida Vale, it’s been great.”

Only one question remains – is it a coincidence that Chris Bear should drum for Grizzly Bear? He laughs. “It truly is. Before I even knew him, Edward was calling his recordings Grizzly Bear and I don’t know exactly why, it was just a weird coincidence. Someone said I should check his music out and it went from there!”