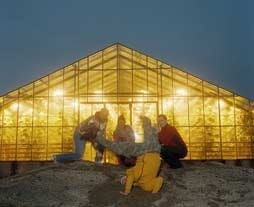 To paraphrase Beth Gibbons, it’s an icy time of year – and if you happen to be from Iceland, it’s very icy indeed. So if you’re an Icelandic dance band, what do you do for Christmas and New Year ooop northerly?

musicOMH caught up with Urdur “Earth” Hakonardottir, singer with Gus Gus, for her thoughts on the year just gone and the new one beginning – and of course Christmas…

What’s she thought about this year’s music, what should we look out for next year – and just what is Iceland like at this time of year?

musicOMH: Of all the things that have happened this year, which do you find is mostmemorable?
Earth: Everything basically – it all leads to now!

musicOMH: If you were awarding a prize for Person Of The Year, who would win?
Earth: My friend Hanna!

musicOMH: What does Christmas make you think of?
Earth: It makes me think of what the world has come to, how much we consume! Howignorant and vain we are to celebrate Christmas the way we do, idolisingand promising goodwill to all and pray for those in need and then we go outand buy presents for ourselves? Christmas is nothing but a marketing device!

musicOMH: Which song most reminds you of Christmas and why?
Earth: ‘Last Christmas’ by Wham. It gets played A LOT in Iceland round Christmas!

musicOMH: Which Christmas song do you most despise/love the most and for whatreason?
Earth: There are so many I love – Holy Night – I think its called that!? Very dramatic and beautiful, especially if sung by choir!

musicOMH: And which ones would you take back to the shop to get your money back?
Earth: Jolahjol with Icelandic band Salin Hans Jons Mins – fortunately Inever spent any money on it!

musicOMH: From the past year, which CDs would you most like to receive as Christmasgifts?
Earth: I don’t have a CD player but I have some CDs – but I would like to havethese artists’ new albums – Mri, Felix the Housecat, (the) Rapture – I lovethem!!!!! Peaches, Chickenlips, Mum, Tweet… Too Many DJs‘ mix cd!!!! The list goes on…

musicOMH: If you were to record a contender for the Christmas number one,which song would you choose?
Earth: Sorry my head is as blank as an unwritten page!!!

musicOMH: And if it was a collaboration, which artist – dead or alive – would you wantto record with, and why?
Earth: Elvis, because it would make perfect sense in this situation !

musicOMH: Is there any Christmas song you wish you’d written?
Earth: No!

musicOMH: Which song would you really like to hear as you are celebrating New Year(except ‘Auld Lang’s Ayne’)
Earth: To be in love with India and maw blasted all through the sky!!!!!

musicOMH: What would be your fantasy line-up for a Christmas Day edition of Top ofthe Pops – current, past and even dead stars can be included.
Earth: Milli Vanilli, Boney M – this is a hard question since I don’t reallyhave a fantasy lineup for Top of the Pops, but I have a fantasy about going to a Supermax concert!!!

musicOMH: How will you be spending Christmas Day and New Year’s Eve?
Earth: With my mom and my family.

musicOMH: What’s Christmas and New Year like in Iceland (aside from being very cold!)?
Earth: Beautiful, visual with extreme amount of lights and fireworks and thendarkness and stillness and snow! And we have fun and cava!!!!

musicOMH: What will you be drinking to see in the New Year?
Earth: Cava of course!

musicOMH: Who do you hope we see less of in 2003?
Earth: Those who have shown us all there is to see. Hopefully they’ll put someclothes on and make music if they can?

musicOMH: What do you intend to do in 2003 that you haven’t managed to do yet?
Earth: I intend to french kiss a lot in 2003. I haven’t really been managing enough.

musicOMH: When’s the next Gus Gus album/project being released?
Earth: Our next project, the video to David, is coming in January. I have no ideawhen our next album is released since weve only just started working on it…!