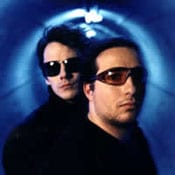 Fresh from winning the 2002 Top Of The Pops award as Best Dance Act, super dance group Ian Van Dahl show no signs of being a flash in the pan.

The combo consists of producers Christophe and Erik, and vocalist Anne Mie. They’ve played a big part in the upsurging Belgian trance scene over the last couple of years.But, as thoughts turn to snow, Christmas carols (urgh!) and office parties (bleurghorama!), what will Ian Van Dahl be up to? And how do they rate their musical career thus far?

We asked a few seasonal questions with some extras thrown in, and Christophe amiably answered them…

musicOMH: If you were advising someone on how to achieve the quintessential Belgian dance music sound, which instruments, programmes and other hardware would you advise them to buy (eg. CuBase, Roland synth, Korg rhythm programmer…)?
Christophe: Good question! There isn’t really a rule or way of working. I wrote Absolom Secret, which went to number one in Spain, with my Atari 1040, four synths and a sampler. Personally I wonder if there really is something like a “Belgian” sound… anyway, we can only talk about the way we work. Erik and I own over 80 synths, dozens of sample CDs… in a way we are freaks! But because of all the instruments we have and the time we put into creating new sounds, we’re always able to come out with something new.

musicOMH: Are you still working with Peter Luts of Lasgo?
Christophe: Lasgo, Dee Dee and Ian van Dahl are all with A&S in Belgium, so it’s obvious we’re working together. Sometimes it can be a co-production, or we can swap remixes…

musicOMH: Are you surprised by the UK music buying public’s reaction to Belgian dance music over the last 18 months – two years?
Christophe: Yes. With the UK being a very closed market, I never expected our records to become so big.

musicOMH: What’s the best club in Belgium in which to hear music like that made by Ian Van Dahl?
Christophe: In Belgium our music is played at parties and in commercial clubs, similar to leisure clubs in the UK. The remixes are played in “cooler” clubs. That’s why we make so many remixes – this way our music gets exposed everywhere.

musicOMH: How does the dance/club culture of Belgium differ from that of the UK?
Christophe: Belgian club culture is largely influenced by other territories, while the UK tries to create its own culture.

musicOMH: How did you come by the name “Ian Van Dahl”?
Christophe: Some kind of joke. There’s a Flemish song about a kid named Jan van Daal. We made it sound more international!

musicOMH: Have you started work on a new album?
Christophe: Yes – Erik and I are in the studio all the time, while Anne Mie is writing new vocal lines. We hope to have some great results real soon.

musicOMH: Can you remember which song, artist or music scene got you into making music in the first place?
Christophe: For Erik this was Simple Minds, but I don’t really have a song or artist.

musicOMH: When you decided to make music, how did you approach it? Did you experiment with instruments or consult magazines, friends and record shops?
Christophe: We started with one synth..,then bought another… then another… then another! But it’s always good to read about stuff. I would advise people to think twice before buying an instrument – try to get the most out of your money.

musicOMH: Where have you most enjoyed playing over the last year?
Christophe: That would be Duba in the Emirates. Great party. I never expected them to be such party people. And Japan was great too. Different culture. I like travelling and meeting new people.

musicOMH: Is Ibiza now old hat?
Christophe: I never really liked Ibiza. Give me Miami instead.

musicOMH: Are you open to collaborations with up-and-coming musicians?
Christophe: Yes. We’re very open minded. We even might learn from them.

musicOMH: Of all the things that have happened this year, which do you find is most memorable?
Christophe: I would say winning the Top of the Pops award. Beating other nominated artists like JXL, Moby, Scooter and Basement Jaxx.

musicOMH: If you were awarding a prize for Person Of The Year, who would win?
Christophe: Bill Gates.

musicOMH: What’s happened this year in Belgium that’s been memorable for you?
Christophe: Nothing really happens in Belgium. It rains all the time. That’s why we’re always working in the studio.

musicOMH: What does Christmas make you think of?
Christophe: Work.

musicOMH: Which song most reminds you of Christmas and why?
Christophe: The album ACE… around Christmas we were working non stop to finish that damn CD!

musicOMH: Which Christmas song do you love the most?
Christophe: The Power of Love from Frankie Goes To Hollywood.

musicOMH: And which song would you take back to the shop to get your money back?
Christophe: Jingle Bells.

musicOMH: From the past year, which CDs would you most like to receive as Christmas gifts?
Christophe: I’d rather have a new PlayStation game.

musicOMH: Which instrument would you most love to receive for Christmas and why?
Christophe: Yamaha DM 2000… if possible two! Why? Because they’re pretty expensive!

musicOMH: Where for you is the best place in the world to spend Christmas and/or New Year?
Christophe: At home with the whole of my family.

musicOMH: If you were to record a contender for the Christmas number one, which song would you choose?
Christophe: Pump up the Jam by Technotronic.

musicOMH: And if it was a collaboration, which artist – dead or alive – would you want to record with, and why?
Christophe: Dido and Madonna. They are great artists.

musicOMH: Is there any Christmas song you wish you’d written?
Christophe: Bing Crosby‘s White Christmas. Do you know how many copies he sold of that track?

musicOMH: Which song would you really like to hear as you are celebrating New Year (except Auld Lang’s Ayne)?
Christophe: Castles in the Sky on Times Square at midnight.

musicOMH: How will you be spending Christmas Day and New Year’s Eve?
Christophe: Playing at a party I guess. Erik will be with a blond Scandinavian girl in a sauna.

musicOMH: What will you be drinking to see in the New Year?
Christophe: Ice Tea for Erik, and for me – a red vodka with Red Bull.

musicOMH: Who should we watch out for in 2003 (aside from Ian Van Dahl!)?
Christophe: George W Bush.

musicOMH: Who or what do you hope we see less of in 2003?
Christophe: Clothing.

musicOMH: What do you intend to do in 2003 that you haven’t managed to do yet?
Christophe: Move our studio to our new location.

musicOMH: What’s next for you musically in 2003?
Christophe: New album and singles for Ian van Dahl and a new album for Dee Dee.

Ian Van Dahl’s album Ace is out now through Sony. Questions were posed by Michael Hubbard.