a-ha’s Morten Harket: “The take was that we belonged to 1985. We had never embraced that” – Interview 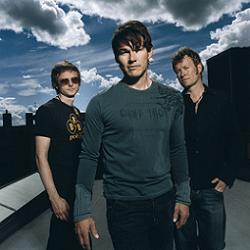 They split up in 1993, reformed in 1998 and finally hit the UK Top 10 again earlier this year with Analogue (All I Want). However, mention a-ha and what do you think of? ’80s pop? Take On Me? The video to Take On Me? Morten’s falsetto? Morten’s cheekbones?

Now this is a surreal experience. I’ve just walked into the bar of a London Soho hotel and there in a side-room is a-ha keyboardist Magne Furuholmen talking to a young lass. What’s so surreal about that? Well, the side-room has a desk, a couple of benches and, erm, a toilet. “A great place to do cocaine,” observes someone from the record company.

Of course, Magne and friend aren’t snorting lines. It is before midday, after all. No, he’s being interviewed and with guitarist Pål Waaktaar-Savoy on a plane back home to New York, that leaves vocalist Morten Harket with the unenviable task of being interrogated by yours truly.

Or should that be the other way round? Morten has a bit of a reputation as a “difficult” interviewee, prone to philosophical and metaphysical musings and often loth to discuss a-ha’s music. However, here at musicOMH we like to encourage such behaviour and so dive into a question about whether the oft-cited biographical “fact” that a-ha almost never happened because Morten was thinking of becoming a priest is actually a myth.

Morten sets the record straight. “I was not considering that, that’s not true. I embarked on studies in theology after school. But I never considered being a priest. I was just interested in theology, which I still am. I did a song once [Lord from the 1995 solo album Wild Seed]: ‘Lord, if that is your name / I’m afraid I’m beyond honour and shame / There’s nothing special that i would like to say…’ But I’m here and I have a feeling that You are there. It’s like a basic question but some people tend to think it’s a yearning so think it’s something we are making up.

“But what has become more interesting for me in the later years is that from a merely rational point of view it does not make any sense that the physical world itself actually exists. I’m serious about that. That’s the type of debate that’s hard to hold anywhere because: ‘Of course it exists – you can feel it, you can touch it.’ But I don’t believe that to be true. I don’t trust that it’s there because we have no proof of it, we only perceive it to be there – that doesn’t prove that it’s there.”

“What can I say? I don’t know. I do nothing… I don’t exercise.” – Morten Harket refuses to divulge his secret to physical agelessness.

At this point, dear reader, you might be Hunting High And Low to follow Morten’s Train Of Thought. But, to be fair, as the two of us go on to debate the meaning of ‘nothing’, ‘infinity’ and how “everything is only understandable from a spiritual point of view”, Morten acknowledges that “on a good day I’d be able to explain it better than I’m doing now,” before adding, cryptically: “The factor of time to me is very fickle and I don’t trust it to be what it appears to be. There is something phoney about time.”

He’s not wrong. If I look half as good as he does at 46 then that’ll be twice as good as I look now. So c’mon Morten, I know everyone keeps asking you, but what’s your secret of eternal youth? He laughs but, unfortunately, keeps his cards close to his barrel of a chest:

“What can I say? You are right – I am being asked this many times – but I don’t know. I do nothing.”

I’m incredulous. Surely he works out?

“No, I don’t. I don’t exercise. I really need to. It’s something I’m bad at. I’m bad at getting there. I like doing it and I’m so pleased with myself when I pick it up and start to do something.”

“When we stopped we were fed up with media… I was fed up with the media’s take on what a-ha was… Why we were there had nothing whatsoever to do with the colour magazines and the poster crap.” – Morten Harket on why a-ha split up in 1993.

Morten has defied time physically, just as a-ha have traversed three different decades of musical trends with ease. However, too many they are still a throwaway ’80s pop band. It is this view that Morten blames for causing them to split up in 1993, not the band members’ personality conflicts. “There were no new disagreements. They were the same ones we always had. They are still there because we are different as people and have different ways of viewing life. Pål, for instance, comes from a much more protective mindset. I certainly don’t and neither does Magne. In that sense, as ‘types’, Magne and I are a lot more alike. Pål holds things in to himself a lot more. But Pål comes that way, I come this way. There’s not much you can do about it.”

“But that’s not the reason we split up, in my view. What we walked away from was [the] media. When we stopped we were fed up with media. I certainly was. I was fed up with the media’s take on what a-ha was… Why we were there had nothing whatsoever to do with the colour magazines and the poster crap and all that… We were just fed up because the take on a-ha was that we belonged to 1985 and we had never embraced that – we just accepted it for a while. So we pulled the plug and let everything go out the drain.”

Instead, Morten took to making solo records (big in Norway, apparently) and political activism (the plight of East Timor being most notable); while Magne sculpted, painted and made music for films; and Pål created a band Savoy with his wife. During that time, they had no contact with each other, something which Morten insists “was not a conscious effort – it was natural”. I ask who made the first move to get back together.

“None of us! It came from outside actually. Somebody plotted it. They got us together for a thing we were hard-pushed to turn down – the Nobel Peace Prize Ceremony. All of a sudden we were on stage again.”

“Somebody plotted it. They got us together for a thing we were hard-pushed to turn down – the Nobel Peace Prize Ceremony. All of a sudden we were on-stage again.” – Morten Harket on how ‘manufactured’ reunions can be a good thing.

The 2000 album Minor Earth, Major Sky followed, and in the song Summer Moved On, Morten managed to outlast Bill Withers‘ effort in Lovely Day and set the world record for the longest note held in a song. Then came Lifelines in 2002, but it wasn’t until the current arbiters of mainstream musical tastes, Coldplay, started professing their undying love of all things a-ha-like (they even appeared on Magne’s 2004 solo album) that a buzz really started to develop again.

Morten admits that the band are revelling in the praises of their peers this time around. “We are constantly being asked what it feels like to be cited as big influences by a lot of prominent artists today – that is one thing that we really appreciate now. And it struck me a couple of days ago when I was looking back that we’ve had a second run together now that has lasted in many ways longer than the first one.”

It’s one thing to receive plaudits from music reviewers and even fellow musicians, but as our interview time draws to an end I wonder if those most exacting critics of all – his kids (four in all, two of whom are teenagers) – dig a-ha: “Sometimes! They love the old stuff – not all of it, some of it. And also some of the stuff we do now. And they are embarrassed by other stuff [laughs]. But they are proud, I know that. But it’s a very vulnerable position at the same time because when you’re proud of something it’s important that it lives up to that. And if we’re doing something that they don’t think fits that bill it becomes equally embarrassing.”

Looking at the supposedly middle-aged man before me, I think the Harket family has gotten off pretty lightly in the “embarrassing dad” stakes.