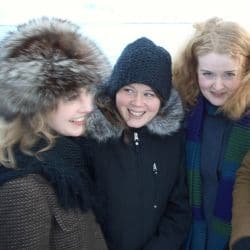 The four girls of Amiina began playing together 10 years ago, after meeting at the Reykjavk College of Music.

Playing as a string quartet, the band only began to spread their wings into its current multi-instrumental incarnation in 2004.

Since then they have released two EPs and continued to work on the array of songs now being readied for release as debut long player Kurr, in between touring with long standing collaborators Sigur Rs.
The recording of the album was by no means a simple process, and was held back by a gruelling tour schedule, as chief viola player Edda Rn lafsdttir explained when we caught up with her for a chat.

“The album took a long time to record, because we were always on tour. But I dont think that matters, because we are so young, as a band. But we’re really happy with it – it turned out exactly how we imagined it.”

There is undoubtedly an element of innocence in Amiina’s sound, surprising given their seven years on the road with Sigur Rs. Recorded in Iceland “little by little,” Kurr is a remarkable record in many ways, if not only for the array of instruments featured. Alongside guitars, keyboards and mandolins, Kurr features a saw, Celtic harps, metalophones, singing wine glasses, xylophones, glockenspiels, harmoniums, kalimbas, a Rhodes piano, synthesisers and tubas.

“We played pretty much everything ourselves,” continues Edda. “Orri from Sigur Rs played drums on Lori, but the rest was us.”

“It’s a nice feeling to think the people at our shows have come to see us..”
– Edda Rn lafsdttir on Amiina stepping out of Sigur Rs’ shadow.

However, such a setup doesn’t come without its problems. “It can be pretty crazy – live it’s sometimes difficult to get everything ready!” And with the live shows comes the need to recreate as much of the song fabric as possible, with each band member changing instruments and adopting a certain role within the band. This is not without its challenges. “We have to practice more on certain instruments – the harp is kind of tricky!”

The Sigur Rs collaboration saw them playing huge sell-out concerts and could easily have overshadowed their own music. Amiina don’t see it like that. They first played alongside Sigur Rs in 1999, and joined them on their recent Takk tour as both the support act and as a part of the main set, but for Amiina it’s all part of the experience.

“We’ve been working with them for seven years and it’s been a really good experience. But now it’s a nice feeling to think the people at our shows have come to see us.” And come they have. With recent dates up and down the UK selling out, and a packed showcase set at the Great Escape festival in Brighton for UK label Ever Records bringing more critical acclaim, it’s clear that Amiina are not without a following.

And now the band are ready to take on the world with Kurr, a record they’re are excited with, and a mastery of all things harp related. You might not hear Amiina’s quiet, reflective textures from miles away, but when they approach you’d be well advised to listen closely.