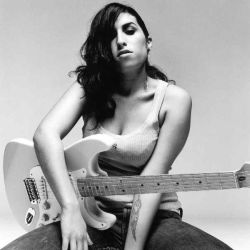 Together with Jamie Cullum and Katie Melua, young Amy Winehouse is being lauded as a flagbearer for the New Wave Of British Jazz and has just been nominated for an Ivor Novello award.

We caught up with her recently to find that she is not altogether impressed with her supposed peers and believes she has as much in common with hip-hop as jazz. Sit back and prepare for some refreshing candour.

It’s hard not to warm to Amy Winehouse. Frank, just as her album states, and disarmingly honest, she is clearly confident of her own mind and considerable talent. Far from tripping off well-constructed and rehearsed anecdotes she is, well, stuffing what sounds like a sandwich throughout most of the interview. At the outset, she shouts over to her press officer, “Is it okay to smoke in here?” Then, when there’s no answer, she lights up anyway.

A key trait about Amy is the implausible maturity evident in her lyrics and vocal style, at odds with someone barely out of their teens. It seems to have helped the 20-year-old survive in an ever-more cynical music industry:

“I was expecting it to be cynical ‘cos I’m like that myself,” she says. “I wouldn’t want it to be all roses because life isn’t like that.”

In a live scene, Amy has already proven herself; many reviewers have commented on her nonchalant, confident stage presence, not to mention her considerable ability on the guitar.

“My brother taught himself, so I took inspiration for teaching myself from him and he showed me a couple of things.”

“I don’t care about that. I’m not the kind person that would ever had gone if I wasn’t nominated.”
– Amy Winehouse oozes apathy about The Brit Awards.

That said, she did go to stage school – Sylvia Young’s to be precise, responsible for turning out the likes of Jon Lee from S Club 7 and Emma Bunton. Did she not learn the art of performance there?

“The thing about stage school,” she explains, “is that it doesn’t necessarily prepare you or train you for your skills. They prepare you as a person and are good for building character.”

Was there ever any pressure to join a manufactured pop band?

“Not at all,” she says. “When you’re at school…, you’re all in training together. It’s not like pop star school – If you want to do that, that’s what happens after.”

Fortunately for everyone, Amy didn’t take that route. It hasn’t hindered her meteoric rise to fame however; she now enjoys that as well as a much-hankered-after credibility, having just earned two Brit nominations and most recently, an Ivor Novello nomination. Unsurprisingly, the latter means more to her.

“The Ivor Novello-s are a songwriter’s award and that’s what I am,” she says. “I’m not trying to be best female, I’m just trying to write songs.”

But what about the Best Female nomination at the Brits?

“That’s cool. Whatever. I don’t care about that. I’m not the kind person that would ever had gone if I wasn’t nominated, you know what I mean?”

“SHE must think it’s her f**king lucky day… She’s singing s**t new songs that her manager writes for her.”
– Miaow! Amy Winehouse on Katie Melua.

Anyone who watched the Brits would have seen the “new face of jazz” contingent represented by the Jamie Cullum and Katie Melua duet. With a strong jazz element in her own music, it’s inevitable that Amy is often mentioned in the same breath. Amy, though, is clearly not at ease with the comparison:

“People put us together because we have come out at the same time, but we’re nothing alike,” she says. “I feel bad for Jamie being lumped in with me and her. I’m a songwriter and she has her songs written for her. He must feel frustrated. SHE must think it’s her f**king lucky day.”

“If anyone stands out straight from us, it would be her,” she continues of Katie Melua.

“Because she doesn’t write her own songs. It’s not like she’s singing old songs like Jamie, she’s singing s**t new songs that her manager writes for her.”

I get the impression that this vehement put-down isn’t fuelled by spite but an unwillingness to compromise her own opinions.

“I’m a musician. I’m not someone who’s trying to be diplomatic, you know, trying to get my 15 minutes,” she explains. “I’m just a musician who is honest.”

It’s not just jazz which influences Amy’s music, however.

“I take a lot from jazz musically and a lot from hip-hop lyrically,” she says. “I am a jazz singer but my album is straight hip-hop… I would say that people in creative hip-hop are the jazz of today.”

“… Go to Vegas, open my own casino and perform there every night!”
– Amy Winehouse on her career ambitions.

Talk then moves to Amy’s forthcoming UK tour, for which she is currently preparing.

She’s pleased with the venues she can now command:

“Shepherds Bush is a perfect sized venue for me – it’s big but it’s not Wembley, you know what I mean?”

As well as the tour, there’s also a Billie Holliday tribute concert, which sees Amy sharing the bill with the likes of Neneh Cherry and Angelique Kidjo. I ask what cover version she is planning on doing.

“I don’t know yet!” she says, even though the gig is less than a week away. “I love Billie singing Autumn In New York, and I love that song The Man I Love.”

There’s also a few festivals lined up over the summer (Glastonbury and V for all you Amy spotters) but she hopes to have some time off to enjoy the sunshine:

“After the tour I’ll have as much of the summer as I can,” she says. ‘But if the weather’s crap I’ll be at home writing – definitely.”

Beyond that Amy doesn’t have a career strategy:

“In the long term I have more family plans. I’ve got to a point where I’ve made an album which I’m proud of. Now I need to follow that up, but to have kids as well. Then go to Vegas, open my own casino and perform there every night!”

The spirit of jazz lives on. It’s easy to imagine that lifestyle suiting her right down to the ground. Let’s hope she gets there in the end.