Annie: “Now everyone’s happy, and I even have money” – Interview 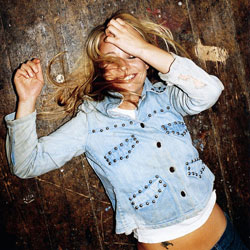 If you haven’t heard much of Annie yet, it’s likely you will before too long. She’s been named the act to watch this year by the Observer Music Magazine and her single Heartbeat was voted the tune of last year by Pitchfork.

Solid grounding for an assault on the UK charts you might think, and with a CV that includes working with Röyksopp and Richard X, the way is surely clear. musicOMH caught up with her…

Today, Annie is coming to terms with the shock of playing live again, having recently completed a gig at the Bylarm Music Convention in Stavanger, Norway. “It was only my second official gig, and it went okay – I thought it was going to be much worse. The reaction was amazing and it was packed, people were standing at the front screaming. I even did that thing where you down and run your hands along the front, like they do on Top Of The Pops. It was very challenging to play live for me, I’m not the best yet.”

It looks like she’s going to get plenty of practice in the coming months though. “We’re supposed to go on a UK tour round about March, then promoting the album in the States, and then it looks like I’ll be playing at a few festivals in the summer which will be cool.”

The album Anniemal took a long time to complete, and was heavily affected by the tragic death of her boyfriend and co-producer Tore Andreas Kroknes. “It was hard,” she says matter-of-factly, “‘cos there was so much work, so much travelling to do. Now I’ve done my work on this I can move on to something else, it was such a relief to get it finished.”

“I even did that thing where you down and run your hands along the front, like they do on Top Of The Pops.” – Annie lives out some childhood dreams when playing live

Richard X contributed to two tracks – last year’s much praised Chewing Gum and Me + One. “He’s such a good producer!” rattles Annie. “He was wonderful, I learned very much. It’s good ’cause I’ve been working with three very different producers, and yet the finished product still sounds like Annie. To start with it didn’t sound like an album.”

Anniemal contains her breakthrough song, Greatest Hit – a tune she clearly loves, but wants to move on from. Between munching crisps she admits to not having heard it for a while, and that “when Chewing Gum came out I was really happy, it was something else to talk about.”

Like Annie, Röyksopp hail from Bergen, which seems to be the Norwegian answer to Bristol. Why Bergen though? “Ah!” she says mischievously, “it’s better in Bergen, much better blood. It’s so small, and it’s not a scene for only rock, pop, house. If you want to enjoy music and you’re only in to one style, say techno, you’re going to be bored in Bergen, it’ll only happen a couple of times a year. People are very open for music over there, and there’s no record companies breathing down your neck. And the weather’s s**t so you have to stay indoors.”

“Norway’s had the most attention since a-Ha!” – Annie on what the success of her countrymen Röyksopp means for her homeland

She agrees that Röyksopp have helped to open doors for Norwegian music. “It’s had the most attention since a-ha! I think it’s been very important for Norway and means a lot for the country. Usually people are looking to Sweden, and there’s always a rivalry between us, but now it’s West Norway. People are much more accepted there now if they’re making a living in music. It was very hard for me when I was 16, I had to be very stubborn to keep going. Now everyone’s happy, and I even have money.”

On her last visit to the UK, Annie took in a football match, supporting Manchester United as they lost to Chelsea in the Carling Cup. “It was amazing, nothing like I thought it would be, it was a really special experience, and it was great to see the real England.”

I didn’t expect to be talking football, but as we discuss the merits of Ole Gunnar Solskjaer and John Carew, it occurs to me that Annie seems to have just the right temperament to succeed in the UK. Her pleasant demeanour and, above all, her spiky take on pop music should give her a fighting chance of an away win.

Annie’s album Anniemal is out now through 679. Tour dates and further information can be found here.