Interview – Antony And The Johnsons 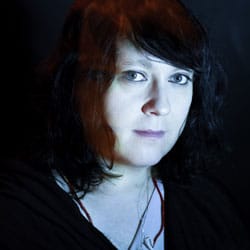 Amid the plush, pink-hued furnishings of a hotel lounge not too far from Buckingham Palace, Antony Hegarty is struggling to make himself heard over the mild boom of polite chatter and the tinkling of ice. To anyone who’s seen him demonstrate the full capacity of his remarkable, unearthly singing voice in the vastness of a concert hall, as the frontman of nebulous musical coalition Antony And The Johnsons, this may come as a surprise.

At 6’4″, with a shock of (synthetic) black hair framing his pale features, his imposing physical presence is somewhat at odds with the hushed unfussiness of his manner, and the measured, thoughtful tone of his speaking voice. Five years on from the storm-in-a-teacup over his winning of the Mercury Prize for spectral second album I Am A Bird Now, his music is steadily shifting from the smokey torch-song inflections of his earlier records towards something more open and pastoral. His most recent two albums, The Crying Light and the current release, Swanlights, see him moving into more spacious, timeless territory, often with the assistance of precociously-gifted orchestrator Nico Muhly (who has worked with Philip Glass, Grizzly Bear and Bjrk).

To accompany the release of Swanlights, Antony has also produced a 144-page book (also entitled Swanlights), a startling, bleak and beautiful collection of his visual art. It encompasses figurative line drawing, photography, scratchy hand-written text and rough-hewn photo-collage, sometimes dealing with sex, gender and sexuality, more often than not angrily lamenting our much-abused planet, and the animals and people who get trampled by progress. Despite its occasional harshness, the book, like its parent album, is never less than ravishing, the beauty and horror wrapped up in one another, inextricably.

Why a book at this stage in his career, after all the music? The first of a long series of pauses: he is being careful to say what he means, to be understood exactly. “I took advantage of the fact that I have some platform of music, and that publishers would be interested to release some of my visual work. I was reticent to do that at first, but I was encouraged by friends who saw the body of work and just said ‘You should release it, since you’ve been doing this exploration over the last few years, you should pursue it’. So I did a couple of gallery shows, one in Brussels, one in Paris, one in London. Then it was just a matter of getting up the nerve, really.”

With the chattering of the chattering classes beginning to overwhelm, Antony invites us up to his room, which he suggests will be quieter. Once we’re settled again, we pick up the conversation. Which came first – the visual art, or the music? “It’s always been parallel,” he says. “I was doing music and drawing since I was a kid, so though I don’t consider myself an accomplished visual artist by any stretch of the imagination, the work had incredible weight to its content, so I thought it was valid to put it forward, it was valuable to me, and that was really my criteria.” Is one respite from the other, or do they fucntion as a combined medium? “They occupy quite different seats in my creative process,” he explains. “Making visual work is quite solitary, and it’s much more introspective, and in a funny way much more personal: I don’t really consider a relationship with other people when I’m making drawings or collages, I’m just following a flight of fancy, whereas when I’m singing, especially live, it’s a constant negotiation with other people and a negotiation with the space as its being beheld by other people and by yourself.”

“So it’s a very different engagement,” he says. “After I’d finished I Am A Bird Now, I really retreated for a bit into the visual stuff, and I think the book is a way for me to reengage with the creative process on a very personal level: there was no weight of expectation, from the work, so I found it kind of was private in a way and nourishing to me in that regard.”

Is that aspect of it being private or personal the reason why the visual work seems much rougher and less polished than the music? “Maybe, but that’s also just what visually interested me, I think. When I was younger I tried to make something that had really perfect lines and I used to be sort of preoccupied by that. I’m interested in the process of making certain types of drawing trying to find a kind of abandon, and in that way it’s similar to the feeling of pursuing music, especially in a live context; I’m always seeking to forget myself, not purposely making a gesture, to let go of my self-consciousness. That’s the same in some ways as drawing a line. There are other pieces in the book that are more conceptual. They have more of an ‘instruction’.”

He seems especially concerned with his position in nature and the world in both music and art. “Yeah, I think that’s just what I’ve come to: I think that’s probably a normal question that artists tend to ask themselves: who am I, what am I, where am I? And that’s what it comes down to for me, where am I and what’s my responsibility to this place, and this life? Do I have a responsibility to this place beyond this life? And it opens up all sorts of questions and creative fields to explore. I got a lot of that from studying butoh (Japanese theatrical discipline) in my early 20s. Stepping out of a pedestrian sense of time or possession, imagining yourself or your conscious reach could delve into the dreams of a stone or the past, or the future, or other animals. And it opens up all sorts of questions and all sorts of creative fields to explore. When you look at an image, for instance, you could dream about the past and the future of the space that’s represented in that picture as well as just the moment that’s been captured… all of those fields could inform that gesture, as an artist or a performer.”

“If I’d gone to college, I’d probably have ended up taking, you know, the same sorts of art classes… and feminism classes…” – Antony

Does it also inform the transcending gender? Thematically he’s – perhaps inevitably – concerned with transgender, queer and feminist issues. He ponders. “I think it’s funny to think of transcending gender, because I don’t know where you would go. Beyond the genders? I definitely have circled that world, the world of male and female… living between or in the midst of those.”

Of course, Antony wasn’t always a figure of New York’s underground music scene. The reason he was eligible for the Mercury Prize is that he was born in Chichester. Would his art have emerged there as it did in New York? Would he have reached the same place eventually? “I don’t really know, I’ve no idea. If I’d gone to college, I’d probably have ended up taking, you know, the same sorts of art classes… and feminism classes. I probably would have done something similar, but I’d probably have been, you know, more ‘Londonish’. There’s a lot that’s bad about it America, but the main thing that’s good about it, it’s got that sense of frontier, and I think that for the artist, it can be nice to feel that freedom, whereas sometimes in European cultures, which are much older, you end up feeling more beholden to the customs, beliefs systems and traditions of your culture.”

How so? “As an artist, you can’t really shake free of it, you’re always entrenched in it, whereas in America, especially as an immigrant, you really don’t belong anywhere, so you end up just developing these almost nave, or could be considered nave, almost insular dream systems. The very specific culture of NYC and certain artists like Jack Smith and that whole sort of pantheon of queer underground performance that informed a lot of my choices in my late teens and early 20s probably wouldn’t have had the same impact on me, had I come of age in the UK. But I tend to be like a collage style artist, like a cumulative artist. So I’m always gathering information and finding relationships. That seems to be the way I function, whether it’s in the way I read the news, or the way I make drawings, or the way I make songs. It’s always just about finding relationships; it could as easily be a cut-out in a magazine as it could be things that I really care about that I’ve accumulated around me.”

The suppostion is that London, then, would’ve moulded him differently to New York. “I couldn’t say what the exact material would be if I’d stayed in London,” he considers. “Hopefully I wouldn’t be an Anglophile, hopefully I wouldn’t be like some English artists. I like that fact that I’m an immigrant… it’s given me a bit of perspective on every culture I’ve been a part of, so I enjoy that status now as an outsider everywhere, and NYC is an interesting place because it’s an immigrant city, and it was founded on a principle, unlike London, which has become an immigrant city, but there’s a certain population of London that wishes it never had. London is more like all of the colonised people came home to roost, whereas New York was founded on the idea that new people would arrive and imbue it with interest. NYC is full of people that all come from old cultures, and they just meet in this weird neutral zone that almost has no respect even for its own history. That’s Manhattan; it knocks itself down and rebuilds itself every 10 years.”

Does he see himself in an American tradition of music and art? “I do feel I belong to New York, that’s my home in a certain regard, although I don’t think I belong to any country. I’m an American citizen, I’m an English citizen, and in terms of a tradition of work, I think it depends on the medium. In a lot of ways I’m very much a child of English music, but that was later informed by later American influences, that I probably would have picked up on whether I was in England or in America, because in a lot of English musicians are very informed by American music. I think the English are very great imitators, we have the sense of entitlement, that we don’t even question our ability to do it; we have the entitlement to co-opt American music and make it our own, really learn the voice, and that’s why we’re so good at it; it’s all down to our sense of entitlement.”

Read Part 2 of this interview