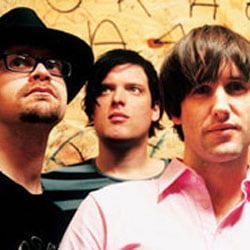 Ash recently announced that their next album, Twilight Of The Innocents, would be their last.

Initial reports suggested the band were splitting up – following the departure of Charlotte Hatherley, they’d all be going their various ways. But Ash are instead restricting themselves to releasing singles in future.

musicOMH regrouped with songwriter and front man Tim Wheeler to recap on eventful times…
It’s easy take a band like Ash for granted. They appear every two or three years, knock out an album and some incredibly catchy singles, tour their arses off, and then go back into hiding and do the same all over again. Well, those days are nearly over.

New album Twilight Of The Innocents is to be their last. After that, all new Ash music will be released in the form of singles. A radical move, for sure. But a wise one?

Tim Wheeler certainly thinks so. “We just want to reflect the times,” he explains. “The way people listen to music doesn’t seem to be so album-based any more, it’s more about compiling playlists and downloading single tracks. I also like the idea of being more spontaneous, and being able to change the way people think with just one song. We can do that every two months, instead of making everyone wait three years.”

The record company dominated treadmill has obviously become a frustration for the guys, and Tim exudes boyish enthusiasm and excitement when musing on the possibilities of this new agenda. “With the internet, there’s just so many ways to do things. We can just do whatever we want to now – if we’ve got a great song we want to get out straight away, we’ll do that.”

It makes perfect sense, as Ash are possibly the greatest singles band of their generation, sometimes to the detriment of their albums. Is it going to be killer hit singles all the way then, or will we see a different side to the band? ” I think releasing stuff consistently will enable us to be a bit more experimental. We can try new things and if they don’t work, a few weeks later we can try something else. The old rules don’t matter anymore.”

There are hints of new musical directions on Twilight Of The Innocents. It’s a cracking return to the pop of 2001’s Free All Angels, but with plenty of new ideas thrown in. “We produced the records ourselves, which gave us more control over the sound,” says Tim. “We wanted to get the energy of our older stuff, but in a different way. We focused on developing the weirder songs, and tried to do something different on every track.”

A standout is the pure pop groove of End Of The World which Tim says he “never thought Ash could sound like”. After posting a stripped down version of it on the web, the positive feedback it received convinced him to develop it. “And now it’s our next single! It’s taught me to embrace new styles.”

The biggest surprise is saved till last though, with the title track that closes the album. It’s the kind of six and a half minute, string drenched, gargantuan epic that Muse would be proud of, full of audacious ambition. “It just started out with a few random loops, then I used a computer program to build them all together like Lego. It took about six months in total, and was a completely different way of writing for us. After we’d worked it out, we then had to learn how to play it, which is a first for us really. We never could have done that if we were working with another producer because there wouldn’t have been the time to sit down and mess around for so long!”

“I miss her company. She was great fun…” – Tim Wheeler on ex-Ash member Charlotte Hatherley

You may have noticed that four have now become three again after nine years, with Charlotte Hatherley leaving to pursue her solo career. “I do miss her,” he confesses, “but it’s been working out great for us as a three-piece.” The difficulties caused by her departure, it seems, are outweighed by the burst of creative energy it’s given them. “By writing songs with just one guitar part, we had loads of room for other stuff like strings and synths, which has added a new dimension to the sound.”

No hard feelings then? “No. We haven’t spoken since she left, but we’re both busy and I’m sure we’ll meet up sometime in the future. I saw some film recently of us all laughing with her in the dressing room a few years ago, and it reminded me how I miss her company. She was great fun.”

It’s hardly an ideal situation when a guitarist with one band B-side to her name makes a successful extra-curricular solo album, and it inevitably caused friction. “It was a bit undermining. We were about to go into a really important record for us, and it seemed like the right time to make the break. The longer you’re around as a band, the more you need to prove yourself, and it takes commitment.”

“We can try new things and if they don’t work, a few weeks later we can try something else.” – Tim Wheeler on focusing on singles instead of albums

A statement of intent, for sure, and proof that there’s plenty of life in the old dog yet. “It’s strange, ‘cos we’ve been around for years but we’re only just thirty. We’re kind of caught between being young and being veterans.” Lest we forget, Alex Kapranos was well into his 30s by the time he made Franz Ferdinand‘s debut… “And The Feeling don’t look like spring chickens either!” Ouch! “Age doesn’t matter at all. I can’t see myself ever stopping writing songs, and while we’ve still got this energy I can’t see us finishing any time soon. We’re freaks of nature!”

The heady summer of Britpop, when Tim opened his A-Level results live on Radio One, may seem like a lifetime ago. But Ash can still show young oiks like The View and the Arctic Monkeys a thing or two. “We’re just gonna fucking go for it. It’s an exciting time for us.” Maybe 30’s the new 20…