Baaba Maal: “If we just spend our time making albums we’re never going to have structures. And we need them” – Interview 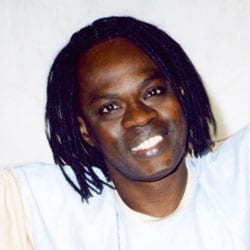 With the possible exception of Youssou N’Dour, Baaba Maal is Senegal’s internationally best known musician, with a recording career that now spans 20 years.

So it may seem strange that this fisherman’s son, who looks at least a decade younger than his 55 years, has taken eight years since his last studio album Missing You to come up with Television, a polyglot opus of nine tracks that clocks in at just over 43 minutes.

He’s ready with the first of several explanations. “I didn’t want to rush to make this album. I did the last one acoustic, with traditional African elements, and recorded it in a village,” he recalls. “This time, I wanted to do something different. I had to think about what to have, and who to do it with, where to do it. And I did take my time to make it happen.”

Television certainly is something different. In multiple languages and styles it takes a gentle dance around the globe, running a gamut from the hypnotic title track through the Cuban-style lilt of Dakar Moon to the electronic treatments on A Song For Women and Miracle. It’s a chilled, downtempo affair, I suggest, that may surprise some of his long-time fans.

“This (chilled-out vibe) is something I wanted to have,” he says, leaning in. “People expect African music to have a lot of drums, to try to make people to dance. I wanted to do something where it was more about the melodies, harmonies, and the way of singing and collaborating with people.”

Television is a result of that spirit of collaboration, not least with the blind griot and long-time friend Mansour Seck, producer Barry Reynolds and Didi Gutman and Sabina Sciubba of New York based act Brazilian Girls (only one of whom is female).

It was Reynolds who suggested working with Brazilian Girls, Maal says. “I listened to their music and I was touched by Sabina’s way of singing. She doesn’t force it; she just sings in this way that is not commercial. I wanted to see, when I play African tunes and melodies, what they can bring to them; not just the beat, but the harmony, the melodies.” Sciubba’s French and Italian lyrics contrast with Maal’s Fulani, Wolof, French and, for the first time, English on Dakar Moon.

“When we do typical African songs we don’t work a lot on the chords,” he says. “That’s something you get from western and especially Latin music.” He suggests this desire to look outwards and toward Latin styles is one of the reasons Reynolds suggested he work with the Brazilian Girls, though he’d written Dakar Moon before he met them.

For Maal, the process of making and performing his music changed with the untimely death, at 38, of his band Daande Lenol’s master kora player Kaouding Cissoko, in 2003. Maal dedicated his 2008 live album On The Road to his friend. “He was travelling with me for 15 years; sometimes I’d just go and play with him, he’d play kora and I’d sing on the top of that,” he remembers.

While African instruments still play a part throughout Television, unquestionably rooting it in Africa, keyboards and guitar are very much to the fore this time. “When you listen to it you can feel there a lot of guitars going on, different types,” he says, “my way of playing, Barry’s way… and African instruments on the top of that. Sometimes Sabina plays too.”

“Music is just music. It doesn’t belong to this part or this part. When we arrive at this level, music is something you share.” – Baaba Maal

His pitch to the world has changed along with his music. “We did a lot of albums in the past saying ‘This is African music talking to the rest of the world’. Now people seem to come to African music, so we have to go to them not just to play African music but to show we are just musicians like everyone else. It’s not an African album, it’s just my album, me travelling, meeting people, seeing things I love and seeing what we can share together.”

This spirit of sharing and of collaboration could define his work with the Africa Express collaborative project, set up by Damon Albarn, that has taken British musicians to Africa and African artists to Britain to play together. Shows have ranged from Glastonbury and London to Lagos in Nigeria. Maal is one of its most enthusiastic proponents – another reason for the long gap between studio recordings.

“Africa Express is meant to be an influence, not just for writing but for collaborations in the future,” he enthuses. “African musicians can find opportunities to work with western people and see how they can build something new in their ears. We give them ideas they can appropriate from African music because it’s just music. It doesn’t belong to this part or this part. When we arrive at this level, music is something you share.”

Critical reaction to the sprawling shows in Britain, which have featured Hard-Fi, Franz Ferdinand and The Magic Numbers‘ increasingly Afrophile Romeo Stoddart, suggested the Africans were the masters and the westerners their students. “This is because Africans are more prepared because of their history,” he suggests. “The west had a lot of impact in Africa because of the media, radio, projections, DVDs. We listen to it – Africans are very curious! We know about rock music, pop music, blues, jazz. Western musicians know less about what we have and what we’re bringing to them. This is why we are more prepared.”

Of course the project is by its nature a two-way street. “It makes a way for musicians to travel to Africa, and it’s not the record companies who’re going to make it happen, it’s the musicians who make it happen,” he says. “People like Reverend And The Makers‘ ears are open. We went to Lagos, and they see people on stage and they realised there’s something there that they’ve missed all these years.” He talks of wanting to take the project to the next level, with recordings and films.

Back in Senegal he found another distraction from recording a new album when he founded his own festival, Les Blues du Fleuve (Blues Of The River), in 2006. “If you don’t do things, who’s going to do it?” he asks by way of explanation. “The governments are sometimes surprised by the success of African music inside and outside the continent,” he says, suggesting Africa’s politicians are not up to speed with creating structures for the nurture of African musical talent. “The young generation are asking me, or Salif (Keita), or Youssou (N’Dour), ‘What are you doing for us? You have this experience, you’re travelling and you know what’s going on!’ It’s a big responsibility, but you have to do it.”

As well as Maal’s own event, there are now several large-scale festivals on a continent until recently bereft of them, including Mali’s Festival au Désert (Festival Of The Desert) and the Lake Of Stars Festival in Malawi. “Now there’s a cultural agenda,” he says. “But we had to work seriously on that. If we just spend our time making albums we’re never going to have structures like that. And we need it.” His work with the United Nations Development Programme makes sure those in power hear that message.

It’s been artists from neighbouring Mali who’ve been at the vanguard of African artists breaking globally of late, led by Tinariwen, Toumani Diabaté, Vieux Farka Touré (son of the late Ali Farka Touré), Rokia Traoré and especially Amadou & Mariam. But Maal says Senegal isn’t far behind. “There are a lot of new artists (in Senegal), especially in the hip-hop scene, and they’re really strong and very focused on what they want to do. Dakar is still one of those places where music is still really alive. People come to discover it. And I think in Senegal we have the support of the public, more than other countries. If you catch that, it can be really helpful for you.”

What should someone landing in Dakar for the first time do and see? In the Baaba Maal guidebook, that’s the wrong way to approach Senegal’s capital. “So many of my friends who come to visit say there’s too many things to do! You must let things come to you; it’s a very alive city, people are very friendly, they like to shake hands, to talk to people, to see where you are coming from, what you want to do, and in what way they can help if you need help… and if you fancy buying something, so they can sell you things!”

“Western musicians know less about what we have and what we’re bringing to them. This is why we are more prepared.” – Baaba Maal

Neighbouring Guinea has its fair share of talent too, he says, though a military coup d’etat in December 2008 complicates matters. “I met a lot of very talented groups who organise themselves very well in the capital, Conakry. But because of all the struggle and political events happening there they don’t know what to do. They travel a lot; they go to play in Mali, they do their own recordings. But they need support to make people know about them.”

He intends to use his appearance at Ornette Coleman‘s Meltdown, his third official gig in London this year, to present some of those young musicians. “It’s always an opportunity to bring two or three young people to collaborate with,” he says. As at his recent Island Records birthday gig at the Shepherd’s Bush Empire, at which he was joined on stage by the not quite so young U2, the Meltdown show will feature his band Daande Lenol and the Brazilian Girls.

The show will, he says, focus on Television, an album named after a medium he believes has the power to help change Africa’s situation. “Television is still quite new,” he says. “When you come to Dakar, or Bamako, and there’s a programme on late at night after people have finished their food, people, even small children, boys and girls playing outside, run in and sit down and are quiet, and everyone is focused on the TV.” The TV has replaced the tree in the middle of the village as a focal point. “The TV is on, and people are commenting on what’s going on, and I think if we use that to change things, to bring new ideas, to make people be able to exchange ideas in a positive way, things can change.”

In Senegal the internet’s not yet making as much difference as it is mainly still used by “people who have been to school who get the chance to be connected to the rest of the world, knowing what’s going on,” he says. “The others, they would like to, but you need to fight against poverty and to give people education to have access to it. Most of the keys on the keyboards are in French and English and people can’t use them; people speak in African languages. So television’s more accessible.”

Maal believes things can change for the better in Africa, and music can help. “The people living in the small villages, it’s only culture that can reach these people because they’re really close to the music and the musicians. And musicians can make them dream. They can want to be like Salif, or Angelique (Kidjo), and want to travel and see the world, to succeed.”

Maybe they want to be like Baaba too. As they dream they’ll know that, in Maal, they have a helping hand to guide them.