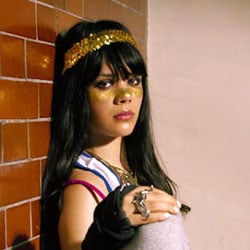 In the form of her musical alter-ego Bat For Lashes, Natasha Khan was one of the brightest new lights on the live circuit throughout 2006, with gigs and festival appearances across Europe drawing attention wherever she performed.

As she prepares forthe release of new single Prescilla, musicOMH caught up with her in London’s Strongrooms to talk about The Velvet Underground, Sun Ra and the influence of children’s fairytales in her work…

In real life, Natasha Khan is much as you’d hope and expect. Even in the middle of the afternoon she looks, reassuringly, as if she’s just stepped offstage. Resplendent in facepaint, sequined headband and a black bodysuit overprinted with skeleton bones, she conjures up an image of running riot in the dressing-up box.

“When I was growing up, my Dad used to use storytelling all the time,” she offers in explanation.”Because he was religious, it was very archetypal, full of symbolism and the metaphors that go through the generations with fairytales”.

As a child, she says she was naturally drawn tobooks by Roald Dahl and “mystical, witchy books”, and describes own her storytelling as, “very intuitive. When I write about lions or queens or court jesters, they’re things I’ve dreamt about. They pop into my mind in a very intuitive way. When I listen to a song, a visual landscape goes through my mind – characters present themselves to me and I try to make sense ofthem, put them into a narrative or metaphor. That’s happened a lot in folk music, maybe because the people who write it have that kind of imagination. I think daydreaming and escapism are part of human nature”.

While the initial idea might come from children’s fairytales (honed by her brief career as a nursery school teacher), the visual influence on her stageshow has more obvious musical roots. “I was always interested in film and photography alongside sound,” she explains. “Like The Velvet Underground with Andy Warhol, when they had dancers on stage with projections of the band behind them. The headdresses and the make-up we wear is an extension of the symbols and themes in the music … [to me], it goes hand in hand.

“As a creative person, I’m obsessed with taking in information about all sorts of things and then I come back and explore that, delve into the histories of the people I like, find out who inspired them, and who inspired them, working backwards through history. That thirst for knowledge gives you more rounded ideas, more depth. Knowing the field you’re working in makes you strong and sure of what you’re doing”.

The more cosmic influences, particularly the gold headdresses and cloaks, she attributes to (legendary free jazz experimentalist) Sun Ra, whose sometimes outré philosophy also appeals. “You see things all the time”, she says, “and I think the things that resonate with you are either because you’ve experienced them in a past life or through your ancestry, or because there’s a link back into something familiar. It’s away to establish yourself and to know who you are – to feel comfortable”.

At times, she has had to strive hard for that feeling of comfort. She describes her childhood as “a troubadour lifestyle” from which her experiences fed into, “a well of creativity. They bubbled around andcreated a soup and then later on, when I became more emotional or felt the need to express something, andat times when life became a bit difficult and I felt that I needed an outlet… through that lens, the creative work started flowing”. The music, however, came later, “out of settled domesticity, when I was at home, from contemplation and reflectiveness”. It also comes from the influence of her mother, who played, “a lot of Otis Redding and Al Green, Motown stuff.” In particular, she attributes the brass influence to Miles Davis. “Songs with horns in are more masculine and have more momentum,” she says.”I’ve got a desire to make things a bit more raw, abit more punchy”.

Considering the delicate, dressing-up box nature ofher live shows, masculinity is not something that’s easily identifiable in her performance but she likes alot of masculine music. “People think I run around playing Kate Bush and Björk all the time but I like Lou Reed, Neil Young, The Cure … a lot of male sounding, male-led bands”. A case in point is Bruce Springsteen, whose song I’m On Fire is a staple ingredient of her live set.

“I just love that song,” she says. “It’s a masculine, sexy song but I felt the words and I felt where he was coming from, so I wanted to take it for myself. Certain songs you like might not be by people who are considered cool but they may have universal lyrical appeal that you can take into your own heart and redefine”. More of this will be seen in her new material, she promises, particularly in current single Prescilla, to which she’s added, “a lot more drums – it’s going to be more of a fully grown song”.

This reworking and re-evaluation of music is allpart of the growing interaction evident in modern music which Natasha, like many performers, sees spilling over into the current scene. “I think people feel more part of the process now [with the internet],” she says. “Human beings naturally desire community and if [live music and live gigs] become a social thing people can be part of, then that can only be a good thing.

“Music has always brought people together and it goes both ways – I feel the audience’s support and that’s really nice. A lot of people right now are trying to make music more human. Pop has become so manufactured, so bland and soulless with archetypes of Britney and whatever but with Myspace, more people can make music at home and get it outthere. More idiosyncratic folk are coming through and I think people feel more of a kinship with that – it’s more home-grown … more humble”.

So what are her plans for the future? Over the next six months, Bat For Lashes will mainly be on the road, covering the UK from Glasgow to Norwich throughout February and March. “We’ve got a lot of touring,” she says. “We’re going to play SXSW in Texas and then hopefully, by the summer, I’m going to have time to bea human being again. It’s quite frightening, the pressure you feel after all this whirlwind. I’m going to be looking forward to doing the next album, though- as it gets closer and closer, I’m peeling back the layers to reveal more and more closely what I want tosay.”