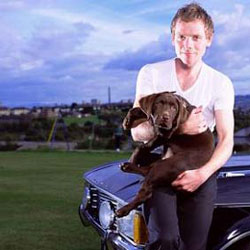 Scottish supergroup Belle and Sebastian have collected about them a cult following since their mid-1990s debut, Tigermilk.

But, having just released the soundtrack to the film Storytelling, the band received the news that their cellist and vocalist, Isobel Campbell, was leaving their ranks – in the middle of a US tour.

We caught up with the Scottish band’s lynchpin, Stuart Murdoch, and asked for his views on Campbell’s departure.

“She came out to do the American tour a week late,” he comments. He speaks with an uptown Scottish accent, pronouncing all his Ts, contrary to Glaswegian stereotypes. “She wanted just to do a couple of weeks of the three-week tour, but apparently a week was long enough, so she went home.”

The matter-of-fact narration is explained away by the suggestion that Campbell’s decision was anything but a shock. “She said that the band hadn’t really been her thing for a couple of years now,” he goes on, “and I think she was much more interested in her solo career.”

Campbell, now with The Gentle Waves, was perhaps the most visible member of the band aside from Murdoch. How did the band deal with her departure?

“We dealt with it quite a long time ago,” says Murdoch. “She was an integral part of the group, but she hasn’t been for a couple of years.”

Are they still on speaking terms? There’s a pause, then: “Yeah, I suppose. There’s no animosity there, more… a shrug of resignation.” And there are apparently no plans afoot to replace her, leaving a core of seven members in the band.

Meanwhile, a new album has been released. For a band so resolutely indie, entering the commercial world of moviemaking seemed to some fans a peculiar decision.

“We certainly don’t have an idea of what the group’s about, so we do what we feel like and let other people think,” counters Murdoch, before going on to explain how the project came into being.

The band flew to New York to see the film at the request of the director, Todd Solondz.

“When we first saw it, it was a rambling two-and-a-half hour thing in two parts and we couldn’t really understand where the two parts came together,” Murdoch recalls.

“I don’t think the director could either, but we still liked the film a lot. Over time, about an hour of the film was cut. We knew as we were working how much of our music he would use.”

In the end, very little was. Which makes the “soundtrack album” that is Storytelling something of an oddity.

It consists of portions of music written for the film plus significant amounts of music that was developed by the band afterwards, begging the question – should we see the film before listening to the CD?

Murdoch believes it doesn’t matter, for the album stands on its own.

“We had to start recording again after we’d done the music for the film to develop these little themes that we had. Some of them are in the film and some of them are not.”

“(The album) really became something quite separate. We’d worked pretty fast when we were in New York, and we thought if we were going to make a record out of this we were going to have to develop it.”

“We went back to the studio, much to the concern of our label, Jeepster,” he continues, “but what the hell, you’ve got to do these things sometimes.”

Murdoch then suggested the label was “finished” and that the band’s next album will be for a different label, although he avoided saying which one.

Jeepster, however, told us that they had advised the band to begin negotiations with other labels in January.

The label said they “took the difficult decision not to continue with the band as it was felt that the band had outgrown the label in terms of costs.”

What does the future hold for Belle and Sebastian, slimmed down and on a new label? On whether or not the slimmed-down band would consider doing more soundtracks at least, Murdoch is unequivocal.

“We’ve got our heads in the ’60s too much when it comes to soundtracks. I think we’d leave soundtracks for a while,” he says.

Murdoch believes that the band’s debut album remains its best to date.

“Tigermilk, I would always say, is to me fine. That was exactly what I set out to do and we got there in three months of being together.

So, did it all go downhill from there? He laughs. “We’ve sort of been unravelling since then – it was all kind of new after that. As the group became a group it became more of an adventure.

“I suppose what I think is that every record becomes better, but there are more imperfections in each record too. It’s hard to explain.”

With a BRIT award behind them and a cult following around the world, it would be easy for the band to become complacent. But the starry life is not for Stuart Murdoch.

“I’ve been designing some merchandise so I have to get back into that,” he apologises, ending our chat. “We’re making a pack of playing cards. I do get into these things!”