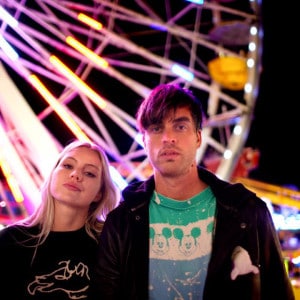 Alice Costelloe says she’s in wonderland. And why not? After less than three years of writing songs with her Big Deal bandmate Kacey Underwood they are busily gearing up for their biggest-ever headline gig at London’s Cargo. After they dropped new album June Gloom this summer they’ve now got two strong releases’ worth of material to play live and a deal with the newly-independent (again) Mute Records to boot. So what’s not for her to like?

But unlike their 2011 tour which followed the charming, if low-key, Lights Out, this time they’ve drafted in a couple of friends to beef up to a quartet. To which the barely-twentysomething Costelloe describes in her seemingly permanent upbeat manner as ‘fun’. “It’s been great playing with a full band and having that power behind you,” she says. “I think I’m more excited about this [second] tour promoting June Gloom as people hadn’t had time to hear it the first time around. Now they have and the reception is much better.”

With the leap from a closeknit duo to bandleaders, Costelloe confesses that the change has been refreshing for her and Underwood. “It’s so much fun to have the four of us playing – it’s like going on tour with your friends. It can get pretty extreme when it’s just the two of you,” she says. “If you worked in an office with just two people you would naturally want to kill the other person after a while… And when you’re in the back of a van or in a hotel room with that person all of the time it can make you feel like you’re going a bit crazy.”

The intensity of their working relationship echoes her references to Underwood as her ‘best friend’ and it’s not surprising that they are often mistaken for a couple. Their heart-on-their-sleeve lyrics are always emotionally charged, prompting fans to read more into their status as bandmates than, say, Underwood’s girlfriend would probably like. But that’s just down to their chemistry, Costelloe insists. “When we didn’t know each other well it was quite difficult to share songs and lyrics. So we started by just sending songs over the internet to each other and then the other person would send back an idea. In the summer of 2011, we sat down and said we were going to try and write a song. And we stayed in all day and wrote the song.

“We went out for a coffee after writing it and thought WOW! What’s happened here? This is crazy! Neither of us had ever written any songs with other people before – and it sounds kind of cheesy now but that’s how Big Deal happened. The songs that followed became Lights Out. We toured for awhile and then decided to spend a bit of time away in the countryside in California to get June Gloom done.”

Fans would have been keep guessing about their swollen ranks as June Gloom’s opener Golden Light opens in trademark hushed fashion with just Costelloe and Underwood singing and strumming – before a barrage of drums explode to officially break the band’s mould wide open. So was that an intentional trick to keep fans guessing? “We thought about that. We didn’t know if that was really the best song to begin the album – but it didn’t fit anywhere else,” Costelloe says. “And when we rehearsed it with the drums it sounded so much better. But we didn’t want to lose the original charm of the song which we wrote just for us.”

That charm oozes from the unlikely power ballad and the rest of the album’s 11 tunes – especially the narcotic, woozy swoon of Pillow with their lockstep vocals and an elliptical guitar riff that sets up this powerful moment of interplay between Underwood and Costelloe: “If you play with me/ you’re playing with fire/ you’re playing with fire/ let it burn/ slowly/ taking turns/ taking turns/ hello/ hello/ I don’t know what you mean.”

He is roughly 10 years older than Costelloe. He’s born in California. She was born in North London. But, she says, this makes no different. “Because we also share a big interest in American college rock-type bands, so we unconsciously reflect the bands we love in our own music.” Notably, that’s the Pixies. The oddball guitar and organ riff on In Your Car recalls the Boston band’s Bossanova-era period. But there is plenty in Big Deal’s approach that is endearingly refreshing.

Certainly, their breezy attitude to making music which sounds best in a car with the windows down on a sunny day helps. Costelloe points to another influence – Evan Dando of The Lemonheads – who she says she’s got a ‘massive crush on’ and who made her feel star-struck when she and Underwood saw him play recently. “The room just didn’t feel big enough,” she says with a laugh.

And now they are the ones on the big stage. So how does it feel? “We are getting much better at playing our songs live,” Costelloe quips. “And we’re probably playing them twice as fast! But Cargo seems like quite a big place for us to be playing. I think it’s our biggest venue so far that we’ve headlined. So the pressure is on!”

Big Deal play London’s Cargo on 27 November 2013. The album June Gloom is out now through Mute.