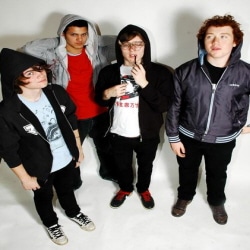 It’s not often a group of 16 year olds storm onto the scene and grab everyone’s attention with the sheer quality of their song-writing. But that’s exactly what happened last summer, when North London’s Bombay Bicycle Club opened the annual V-Festival after winning “Road To V”, a battle of the bands competition.

A composed and exciting performance in front of a large audience later, they were immediately the talk of the music world, with record labels scrambling for their signature.

Upon their return to London, their gigs were packed to the brim, with excitement levels surrounding them reaching heights not seen since (gulp!) the heady days of Is This It era The Strokes or The Libertines. They’d come a long way from the band they formed to play at their school assembly a year previously.

“It was surreal,” recalls drummer Suren de Saram sitting in the bar at Camden’s Dingwalls, speaking of that fateful day last August. “None of us were that nervous really, it was just pretty exciting. It went by so quickly.”

Singer and guitarist Jack Steadman agrees: “Once we got on stage it just felt like a normal gig. I don’t think I really looked at the crowd.”

And to gain the illustrious opening slot on the second stage at both legs of the festival, the band saw off established competition in the form of The Holloways in the aforementioned battle of the bands final.

“We played a gig with them a few months ago,” recalls guitarist Jamie MacColl. “I don’t think we really talked about it! Apparently they were dead sure they were going to win. I think there might have been some bias against them to be honest, as they were quite big,” he continues.

“Once we got on stage it just felt like a normal gig”
– On that V-Festival performance.

So what of the record label interest that ensued after? “Our plan is to take things really slowly, because we’re still in school we wouldn’t be able to take advantage of having a record label yet – we wouldn’t have much free time,” explains Jack. “So we’re going to slowly build up, so that when we leave school we’ll be ready to accept an offer.”

What they’ve done instead is to set up their own label, Mmm… Records, with the help of their management, a home where they can push things along at their own pace. The label released their debut EP, The Boy I Used To Be, last month, something which the band recorded with renowned producer Jim Abbiss (Arctic Monkeys, DJ Shadow, Kasabian) last October.

How did they find the whole recording experience, having only laid down tracks in their bedrooms previously? “It was a massive wake up call,” admits Jamie. Jack interjects: “We needed to practice a lot before hand, which we didn’t. It took us a while to get the hang of it.”

“On the first day, he (Jim) said to us ‘this isn’t good enough!'” recalls Jamie. “The first three songs we did, we ended up re-recording the next week, so it was quite tight in the end getting it all mixed in time, but I think we were pretty happy with the result.”

Their lyrics, as you might expect, speak much of being a teenager in 2007, with the trials and tribulations that go along with it. Girls, house parties, relationships and the prospect of growing up are all subjects that get covered.

“I don’t think there’s any point in writing lyrics if they’re not about personal experience”
– Singer Jack qualifies his lyrical approach.

“I don’t think there’s any point in writing lyrics if they’re not about personal experience,” states Jack, qualifying his approach. “When I listen to bands that write about completely irrelevant things, you don’t really feel that the music means that much to you.”

So what do Bombay Bicycle Club actually sound like? On first listen elements of The Strokes and Interpol are detectable in their rigid guitars, Steadman’s powerful and controlled vocal delivery and their pop sensibilities, but this is far from a one trick band – each song sounds totally different to the next, taking in influences from right across the musical spectrum.

“I don’t think we can be compared to one band,” offers Jamie, somewhat predictably. “Sonic Youth?” suggests Jack, looking around for nods of approval. “Someone said a cross between The Strokes and McFly, but I wouldn’t say that!” adds Jamie.

Whatever they sound like, it’s certainly something that’s exciting many. And they aren’t the only youngsters making lauded noises of late – school pals Cajun Dance Party recently secured a deal with XL for an alleged record fee, whilst the likes of Pull In Emergency, who are even younger, play to sizeable crowds all around London.

What’s going on? Why wasn’t this happening five years ago?

Jack has his own theory: “You turn on XFM, and it’s just a lot of samey, standard, indie. I think a lot of people feel hard done by and want to make their own music.”

Says Jamie: “MySpace has let people get their music out there without having to play that many gigs.” Jack continues: “Also the growing all ages scene, where people are willing to put on nights that are 14 plus, gives bands a lot more hope that they will get gigs. I think this all ages thing is a really good idea.”

“MySpace has let people get their music out there without having to play that many gigs”
– BBC attribute for the recent prolific rise of young bands.

But whilst the world may be seemingly at their feet, the boys assure me they aren’t making that push for superstardom just yet.

“We don’t want to build up anything too big right now,” reveals Suren. “We’re planning on releasing a couple more EPs over the next year. Then maybe an album after that, we’ll see what happens.”

Post A-Levels is the time when the big push is pencilled in for, Jamie explains. “Basically we’re going to do a year of just completely going for it, seeing what it’s like, seeing if we enjoy it.”

And in the knowledge that their music is incredibly vital, relevant and downright good, we should all take a deep breath and hope to hell that they have the time of their lives.

This interview was published in 2007. More at bombaybicycleclubmusic.com.