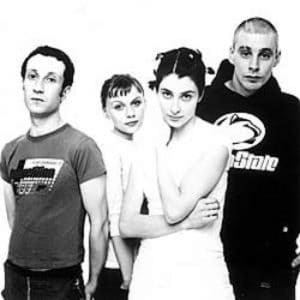 “I was condescendingly told, ‘you can really sing! Why do you use so much distortion on your vocals?’ COZ I FUCKING LIKE IT, YOU SAD SACK!!!”

Meet Muffin Spencer, lead singer/hip-hopper with Brassy, an American in London, a lady with attitude, a one-liner merchant who makes Liam Gallagher sound like a nun.

She’s sat in the upstairs bar of Dingwall’s, Camden, with her Brassy compadres. They are Karen (bass), Jonny (drums/ scratchings/ beeps) and Stefan (guitar), who’s munching on what passes for dinner and contemplating the night’s gig, Brassy’s UK tour finale.

By some quirk of fate I find myself sat at the head of the table, the band spread out two either side. But it is mostly to my left, where sit Muffin and Jonny, that my attentions are focused. Even before the start of the interview Muffin is making grand statements which Jonny injects with a very down-to-earth humour. Karen and Stefan variously fidget, look nervously at my dictaphone and fiddle.

She’s started, so she should finish.

“We don’t use keyboards and guitars – that’d make us sound like God knows what, err…” remarks Muffin, tailing off before Jonny’s interjection of “Sleeper“.

“Yeah!”, she continues, remembering instantly which stylistic point she was attempting to make, carrying on as if she’d said the word herself, only in a different voice. “There’s always been a hip-hop element to our music. It’s a matter of having a budget and being able to use tools and studios that you don’t really have when you’re on a label called Costermonger… I think they still exist…”

Jonny does it again: “He’s still got the same bedroom, I think. That exists…”

Brassy’s former label was not flush with cash. Wiiija, part of the Beggars Banquet Group, to whom Brassy are now signed, have so far released two singles (‘Good Times’ and ‘I Can’t Wait’) and plan to release Brassy’s new album early next year.

Indeed it is, despite Brassy’s presence on the gig circuit for several years. The UK tour they’ve just finished was intended to promote their third Wiiija single, but that’s “been pulled ‘coz of some manufacturing backlog or some such mealy-mouthed excuse from the record label, so it was kind of a tour for no reason,” complains Muffin. Increasingly the optimist of the conversation, Jonny chimes in “Manchester was good – it was good to play to our home crowd”.

Brassy are 75% Mancunian and 25% American, the latter being Muffin. Legend has it that the gangly Ms Spencer left her native U S of A for the drizzly North of England in search of good musicians; I can’t help but wonder if she would perhaps have found good musicians in America if she’d looked, rather than reading the English music press at import prices. She is quick to retort.

“I couldn’t even find a good person in America let alone a good musician, my immediate family excepted.”

Thus it was that Manchester was where the band was formed in the halcyon days of Britpop. “I was working in a pub, in some shitty job,” remarks Muffin. “I was waitressing, being a student for awhile,” offers Karen, contributing for the first time. This seems to rouse Stefan; “I was on the dole,” he says shyly, looking away and back as he does. “I washed people’s hands in toilets,” claims Jonny, already proving that his talent for drumming, making things beep and scratching records is almost matched by his humour. Amid general chortles, he continues; “Stefan walked into this toilet and I thought, wow, he’s got nice hands, I think I’ll clean those! Look at his nails!” he challenges, and I had to agree on close inspection that Stefan’s nails were indeed well presented and in good order. “So he thought he could use a manicurist in the band…”

So, what is Brassy? An obnoxious American, a shy guitarist, an ex-waitress and a particularly tall manicurist? Why did they call themselves Brassy? This ruffles some feathers…

After a long pause, looking as if someone had just deeply insulted her parents, all of her friends and her cat, Muffin summons the composure to answer my question, albeit through clenched teeth. What is not certain is whether this is all play-acting or whether the question really had irritated her. Much play-acting has been going on; but she’s looking fierce just now.

“WHAT… is… the name… Brassy…” I retreat backwards into my seat and prepare to deflect punches. “It’s our NAME! And it MEANS what we ARE!” Her tone changes unexpectedly and she suddenly sounds like Lilly Savage. “Which is obnoxious and cheeky! And cheap and cheerful…” it changes again, more Hilary Clinton, “but not very cheerful really”. Glad we got that sorted.

Well, yes, Muffin is obnoxious, but her guitarist Stefan and bassist Karen could hardly be meeker. Jonny is maybe the cheeky element of the band.

“We’re a mixed bag and we get a mixed bag of fans already, where punk kids can like hip-hop as well, but we’re not gonna get a huge hip-hop following,” says the drummer. Muffin extends Brassy’s welcome to anyone who “wants to jump up and down, enjoy themselves, release a few tensions, anyone with energy.”

The impression is given that although they are happy to be guitar-band/hip-hop crossovers they are still a guitar band at heart, despite myriad influences. Muffin tells me that Brassy’s ideal bill would be a revolving stage with Little Richard, Public Enemy and James Brown – something of an indicator of the influences at work with this band. “We would listen to guitar bands,” muses Jonny, “but there’s nothing much to listen to.” Muffin agrees; “If you wanna hear good riffs you’ve go to go back to the ’50s and listen to Staxxx, or Motörhead. I think we’re doing modern music, the sort of music that’s being ignored by most guitar bands. You don’t have to sound like a hip-hop band to like the style, the attitude. You don’t have to sound like a punk band to appreciate the ethic.”

The band are aware that I’d been to two of their gigs in London previously, at The Barfly, Camden and The Borderline, W1. When musing about what the future may hold, Karen surprisingly wants to play with Venini again, whom Brassy supported at The Barfly. Brassy were at their best; Venini were not. “Yeah, we’ll make them move out of the dressing room,” says the bass player, and I simply have to ask what she means. Muffin is more than happy to answer for her. “We weren’t allowed in ‘their’ dressing room; I guess they needed all that space to apply all that eyeliner and foundation, to hide all their WRINKLES!!!”

There’s clearly no love lost there either… but what else? “We’ll release another couple of singles around the album, and then we’ll release another album, and then we’ll play live extensively and THRILL! people around the world!” announces Muffin grandly, and one almost expects the bar to rise collectively and applaud. “We’ve already started on the second album,” says Jonny. Muffin nods and intones, “You’ve got to think ahead in this game,” before going off on a tangent about brain waves connecting the band members from New York to Wembley Arena (“NOT the stadium”) as they are too poor to afford internet access.

I’d wanted to ask what really annoyed Muffin in the world, apart from dictaphones, but we’d already found a host of entities for the role. Nevertheless, it was time for me to be obnoxious, and the question was aired.

“People who can’t be arsed and people who are narrow minded,” says Karen, but she’s trumped by Muffin; “I’m annoyed by just about everthing so if we start going in there we’re never gonna finish! The whole music industry is annoying. We’re the ones who write the songs, we don’t get any of the money; bring on the internet – control of the music by the artists. We got the deal with our label when we sold our souls. They loan you some money so that you can record something that they own anyway, even when you’ve paid back the money that they loaned you they still own it and they make 85% of the royalties from that thing that they loaned you the money to make EVEN AFTER,” – she’s VERY irate now – “you pay that money back, that’s how it works.” Karen comes up with the quote of the interview then; “They’re just glorified loan sharks.” Jonny doesn’t like the way new bands are treated by critics; his advice is to just go your own way and ignore them.

Muffin agrees with the sentiment. “NME sucks”, says the Brassy one.

An interview with as much gusto as their live sets thus concluded, Brassy head off to soundcheck. I left Dingwalls, hoping that Brassy’s obnoxious image wasn’t going to damage their chances in the industry that so annoys them. One thing’s for sure: you don’t forget this band easily.