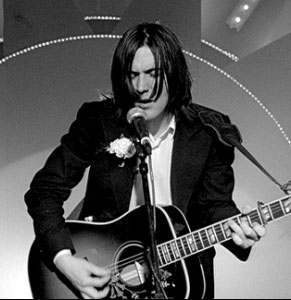 Bright Eyes’ latest album Cassadaga saw Conor Oberst, former enfant terrible of the protest song, come of age with a literate, pained, but hopeful collection of songs that place him firmly in the premier league of singer-songwriters.

Fresh from a (this time) pleasantly controversy-free Glastonbury, Bright Eyes came to London for two sold-out nights at the Shepherd’s Bush Empire, full band with a strings and woodwind section, kitted out in white suits.
On the day after the first night’s performance, musicOMH caught up with Oberst in his manager’s hotel room, messy bed and all. Oberst appeared, perched himself on the edge, and we began.

Congratulations on the gig. Do you think it went well?
Yeah, yeah.

Did you enjoy Glastonbury?
I did, yeah. We were only there for like, six hours, though.

Didn’t bring back any bad memories?
No, no, it was good.

For you, what are the main themes of Cassadaga?
I think it’s about being comfortable in your own skin, and trying to find your own place in the world.

And are you comfortable in your own skin now?
Yeah, sometimes.

You come from a small town in Omaha and now you live in New York. Was it important to your creative development to have that detachment from the centres of culture when you were growing up?
Yeah, I think we ended up making the music we did partially out of boredom. You do have to make your own fun, especially in high school. It was such a conservative sort of place – though there are more venues and arts clubs now. But when we were starting it was the opposite of that, and there was definitely that feeling of defiance, it motivated me to express myself.

How did your outlook change when you moved to the city?
Well by the time I moved to New York I had travelled a lot. It was a realisation that I wanted to be somewhere else. Although I’d travelled a lot I hadn’t really lived anywhere apart from Omaha, and I just love New York.

Do you regard yourself as a New Yorker?
I wouldn’t say that. There are some people who live there and they can never exist anywhere else, but I don’t consider myself like that. If I can afford to, I’ll probably keep a place there, but I like the open spaces.

Are communities like Cassadaga a viable alternative to the state of world at the moment? What was the appeal of Cassadaga for you?
There’s a very peaceful feeling that exists there and the people there, for my mind, are very much in tune with the energy of nature, or spirituality, or whatever you want to call it. To me they exude an attachment to each other, and you can feel it instantly. That is the opposite of the way it’s going with society and technology, there’s this desire to be isolated from everyone; we’re constantly being encouraged to be detached, whether it be with television, the internet or whatever. You don’t have to touch anyone else anymore, but it’s a natural thing to want contact.

Where will your allegiances lie in the 2008 presidential elections?
I’ve been researching, but I’m yet to make a decision. I’ve given money to more than one candidate. I’ll obviously support the Democratic nomination, but as for who I’ll vote for in the primary, I don’t know.

How disappointing was it when the Vote For Change tour proved unsuccessful?
It was really disappointing – feelings of anger, helplessness and shock. How can people be that dumb? I’m always in shock about that.

I read that you weren’t hugely politically minded until you read about Bush’s bid for the presidency in 2000 and thought ‘this clown can’t get in’, which made you pick up your guitar and write songs like When The President Talks To God.
Yeah that’s true. I got interested in politics around the 2000 election. I remember being over here on tour and weeks went by where the election was still being contested. Even in my naïve state, alarm bells went off. Something went wrong in our democracy. And then just seeing him, he reminded me of people I went to school with, these total neanderthals.

Is it his stupidity or his malice that particularly offends you?
It’s truly the two of them together. It’s incredible to be that uninformed yet also believe you’re so right.

How long do you think it will take for America to recover from the Bush years?
Oh man, I’d say at least 20 years. If you think about the place we were economically and in relation to other countries during the Clinton years, arguably it was balanced. And now we have the biggest deficit in the history of our country, and it happened instantly. Of course, we’ve always done shady shit around the world, but now it seems so obvious. I don’t know if we’ll ever get back to that previous dignity, or maybe it wasn’t there in the first place. I guess it depends on what books you read…

Do you think the current political climate has driven you to write songs or is it a natural part of you? For example, if you existed in another time would your songs address the issues they do?
I would say no, I think we’re in a unique situation. That said I don’t plan what I’m going to write, it’s just what’s in my mind. The extremity of the things that continue to happen infiltrate my mind, and the way I deal with things and try to understand them is to write about them.

Are you comfortable with being labelled a protest singer?
I get called so many things that I don’t pay that much attention anymore. It doesn’t offend me or anything, it’s obviously one aspect of one we do as a band. It’s fine.

What direction will Bright Eyes take next?
That’s a good question. We haven’t been thinking about it too much because we’re in the midst of this tour, although we’ve been writing songs. We kind of work by reactions to things we’ve just done, so I’m in no hurry to do anything so huge again. As far as the music is concerned, I think it would be cool to do something with a little more space, less instrumentation.

Will you ever embrace any art forms apart from music?
Well actually, my brother has just finished a novel, and I’m so proud of him because that’s such a huge undertaking – it took him three years. It’s about a family over three generations. It’s great, very intense. That takes a lot of diligence, which I don’t know if I have. I would like to try different things.