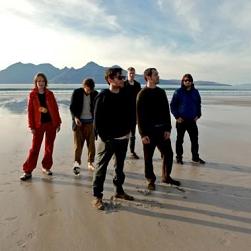 It is time, once again, to celebrate the diversity and slightly oddball originality of British Sea Power. The band have returned with a fourth album, Valhalla Dancehall, their permanent members now boosted to six strong with the full time acquisitions of Abi Fry and Phil Sumner.

Four of the band are huddled around a pedestal in a Shoreditch pub, with singer Yan and guitarist Martin Noble imminent. They sup pints of rich brown Sussex ale, while Abi waits patiently for the mulled wine to warm up. It’s a cold day, and the band have been in the studio – but the welcome is warm as they laugh at a strategically placed pot plant, sitting on top of our pedestal like a miniature leftover from one of their stage shows.

It’s a good starting point, for Valhalla Dancehall was born of nature. “Me and Hamilton moved up to the Isle of Skye,” says Abi, “and we did a lot of stuff up there. I’d just passed my driving test, and we drove between there and Sussex.” “We listened to some motorway songs,” says co-vocalist Hamilton, “but it wasn’t exactly awe inspiring. The Isle of Skye, though, it was quite a different world up there. A lot of wind! We try and find out of the way places that have character and are a bit weirder, places where we can settle in and make it our own.”

“The way technology has come on in the past 10 years, you can do that,” adds drummer Matthew Wood. “It’s more fun that way, as most studios are sterile places.” “The flipside is you never have to finish it,” adds Abi, “so you end up just going on for years, like we did!”

So how did the record get finished? “We ran out of oil and money,” laughs Hamilton. “Quite literally!” “We didn’t realise we had to order it in advance,” says Matthew, “so when it ran out it got to the point of ‘we either make a record or buy some oil’!””We’re getting used to recording in really cold places,” says keyboardist Phil Sumner, practically shivering as he remembers Skye. “Our co-producer Graham Sutton was driving back one night and he got caught in the snow, and had to stay the night in his car.”

Musically, Valhalla Dancehall is the band’s most experimental piece of work to date, a feeling confirmed by the heads nodding sagely around the circle. Lyrically it seems uncannily on the money, with Losing Control drawing unintentional but explicit parallels with the London student demonstrations of the Autumn and Winter.

“That’s Yan, that is,” says Hamilton, “always thinking one step ahead! I don’t think it’s a reaction to politics though. He’s just a bit of a prophet; he wrote Fear Of Drowning and a few weeks later we had the floods. He’s got a power over the world! More seriously though, it’s a sign of the times, and is really of the minute. VAT’s just gone up, the financial meltdown has happened, and there are references to that. I don’t know how much directness there is in Yan’s thinking, but certainly it sums up what’s going on at the minute.”

“It got to the point of ‘we either make a record or buy some oil’!”
– British Sea Power drummer Matthew Wood on the creative junction the band reached on the Isle of Skye

If anything, the new record is at times louder than Do You Like Rock Music, but Abi is keen to point out the subtleties too. “It’s definitely got a lot of rock elements on it, but I think if you go deeper there are wider influences. It’s a bit more diverse, and as you go through the album with tracks like Mongk II, it becomes much more experimental.” Later, Yan adds his wish that experimentation be encouraged. “I hope some of that comes across. Behind the scenes there was a lot going off in weird directions. The last process is where we construct something as a form. A lot went into it, and a lot came out of it.”

As a result, the album moves with relative ease from conventional song structures to more expansive, spun out material. “We’re interested in instant things,” says Yan. “I like pop music, but I like things that take longer to divulge themselves. In this album there’s so much that even now I don’t know everything that’s in there, and I hear new things every time I listen.”

“We had the benefit of the time thing,” says Matthew, “and the time to find good sounds. You can home in on certain sounds and use them, and there’s a lot of that on the record.” Is it difficult to know when to stop experimenting? “Yeah, we had to do a bit of reigning in,” confirms Abi. “In the last period there’s a few shorter, snappier songs written to balance it out,” says Hamilton. “It was a beast that had to be tamed a bit! There’s lots of different worlds in there though, it’s got a flow to it, and it takes you on a bit of a journey. I always like that in records.”

Several of the songs on Valhalla Dancehall have enigmatic titles, such as future single Georgie Ray. “That’s a combination of George Orwell and Ray Bradbury,” says Matthew, “and that’s a thing from Yan’s mind. We had a Playboy magazine from 1963, and there was an interview with Ray Bradbury, and he was going on about what the future was going to be a bit like George Orwell and 1984. It was funny because they predicted things like the iPad.”

At this point Yan and guitarist Martin Noble appear, immediately laughing at the flower pot on top of the pedestal. “The first verse was originally based around a quote from George Orwell that I’d liked,” says Yan. “Someone asked him ‘what’s the future?’, and he said ‘it’s being stamped in the face by a heel, eternally’. It was a little bit more poetic than that, but those are the essential ingredients. I thought it was a bit of a downer, but I liked it and wanted another angle. I was reading a book called Echoes, by Ray Bradbury, and this fellow that hung out with him for quite a while. He was chatting all the way through his life. I wanted to bring in a bit of Bradbury’s fun and optimism, and combined them with Orwell into one person.”

An important aspect of the band’s development is their continued exploration of weird and wonderful sounds, both natural and synthesized. Valhalla Dancehall is no exception. But does it really contain whale sounds? Hamilton, seemingly the group’s chief soundsmith, just ahead of Noble, smiles. “And chickens!” “He’s very secretive about how he makes his noises and things,” says Yan, “and won’t reveal anything!” “I’m just mucking around, using the imagination,” replies his brother. “I’ve got some old tape machines up on Skye. That’s not a real whale though, it just turned into one. All these boys love making a weird noise, truth be told, but we had to go to Skye to get them.” “And did you come away any the wiser?” asks Matthew. “Yeah, we got some noises!” he grins.

The group collectively fixate on the weird and wonderful noises they have used. Noble’s sources are particularly far out. “I went to Shetland,” he says, “and this guy was recording these dotterel birds that live under rocks. At the end of We Are Sound, when it goes into that closing section, there’s a few of those sounds in there.” “We’ve had loads of dogs on our records,” continues Yan. “We even had a shed where we kept pigs, and I did a bit of singing in there.” “We’ve also stuck microphones up chimneys,” says Matthew, “and it’s quite fun when you listen to the recording, with the sound going up the chimney.” “I’m a bit disappointed we don’t manage it more in a way,” confesses Yan. “It’s a bit like an oil tanker at times – your mind is further ahead, and the music takes a bit longer to turn around!”

The group’s connection with horses goes further than having a three-legged steed on the cover of their album. There is in fact a horse called British Sea Power. “We’ve just spent our days betting on horses with odd names,” says Noble. “My dad’s keeping an eye on this one though, and he says to give it time, to wait until the moment’s right. Some fans have bet on it, but they’re betting on the wrong British Sea Power really.” Yan laughs. “You can tell that in some ways we haven’t moved on at all really!”

Later this year, British Sea Power will celebrate a decade of existence, though Yan admits he doesn’t know when that is. “It’s next July,” confirms Noble, “that’s when our first single Fear Of Drowning was released. We have actually been going longer than 10 years.” “I’ve been going 30 odd years now,” protests Yan, “but we’ll accept any presents!”

Valhalla Dancehall, the fourth album from British Sea Power, is released on 10th January 2011 through Rough Trade, containing the singles Living Is So Easy and Georgie Ray. The band support Manic Street Preachers in rearranged Brixton Academy dates on 21-22 January, before setting out on their own UK tour in February. Details of this can be found at the band’s website.