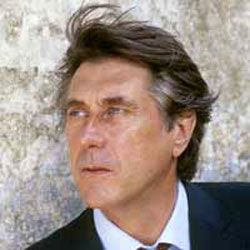 “Oooh, my first interview with a living legend,” thinks yours truly as Bryan Ferry walks into his Parisian hotel lobby with a shopping bag from one of the neighbouring haute couture stores.

Minutes later, we lounge like lizards in the courtyard under the sun and talk about, well, everything…

musicOMH: I believe you had a slight voice problem yesterday. How are you today?
Bryan: Well, it’s normal from being on the road, on tour, singing a lot. I don’t do interviews at all when I’m on tour, so this time, on a day off, I’ll do that kind of thing a little bit.

musicOMH: Why ‘Frantic’?
Bryan: It’s at the end of the recording, when we were kind of finishing off. We were doing the mixing, and we were also mixing the Roxy DVD and editing it. It was a frantic moment for a few weeks.

musicOMH: Do you have plans to do another Roxy tour?
Bryan: You can never tell what happens. I’d be open to it some day. It was exciting, and this tour is exciting too. It’s nice to keep varying things.

musicOMH: Your new album is varied too. You even said, “It was great for me, as a singer, not to have to compete with a hundred other instruments.”
Bryan: Yes, the idea was to try and do something more direct and straightforward.

musicOMH: You cover a lot of Bob Dylan songs. What is it about his songs?
Bryan: The quality of the writing, really. Simple as that. Beautiful words.

musicOMH: What if you did a duet with him?
Bryan: Wouldn’t that be nice?

musicOMH: You once said, “Secretly, I wanted to look like Jimi Hendrix, but I could never quite pull it off.” You obviously love the guitar, so was it his expertise on that instrument that attracted you?
Bryan: Well, he was the best guitar player and had a great look and a great attitude. I saw him play when I was a student. I was very impressed. Very influenced.

musicOMH: Did you want to create an atmosphere or tell a story like on the track ‘San Simeon’?
Bryan: I thought it was good if somebody would go back to a place, a house that has a lot of memories as far as that goes.

musicOMH: Is there anyone you’d like to work with?
Bryan: Yes, Dr Dre! I think he’s very good.

musicOMH: So what do you listen to nowadays?
Bryan: Nothing. I hate music. At the moment, probably MTV. At least you see some amusing videos, either girl rappers and all the guys doing (imitates rap attitude). It’s really funny. I like it. There was one on this morning – Puff Diddy, Daddy, Duddy….

musicOMH: P Diddy.
Bryan: Atomic Kitten – I like them. They’re kind of kitsch.

musicOMH: You worked with Brian Eno again…
Bryan: We did this song together which I really like. We’re doing it on the tour. I might get him up on stage to do it with me one day. That would be good,wouldn’t it?

musicOMH: What’s the difference between the two Bri(y)ans?
Bryan: The difference? I’m much more serious than him (laughs). He loves to talk! He has to talk the talk. And I tend to rather sit and watch more. That’s where the main difference is. But we’re both self-centered. I think we both think the world revolves around us.

musicOMH: All artists do.
Bryan: I think they do, don’t they?

musicOMH: What do you think of Brian’s work with U2?
Bryan: Very good. Great guitarist again. I’ll tell you who’s really good – The Red Hot Chili Peppers. I think they’re really great. I went to see them – and I never go to see anybody – and my children are big fans. Then I met Anthony [Kiedis] here and he gave me four autographs!

musicOMH: Do your children listen to your music?
Bryan: They know it a bit, but they don’t know everything. I’ve never really indoctrinated them, but they quite like it, I think. They’re not embarrassed by it, which is something!

musicOMH: You often include icons of pop culture in your songs: James Bond, Jackie O., Johnnie Ray and Garbo…
Bryan: It adds color to throw in things, references to things. I should really place products in… like Wella Shampoo or something.

musicOMH: And they’ll call and ask you to do commercials and advertise your music at the same time!
Bryan: Yeah, it would be nice to have some advertising spots.

musicOMH: Do you have any professional regrets?
Bryan: Yeah. I don’t know which one to mention, but I do. When I stopped touring in the early ’80s for a few years, it was a mistake looking back. I lost touch with my audience in a way and I think that was a bad career move. I turned down a song that would’ve been a Number 1 record. Simple Minds did it. That launched them – Don’t You Forget About Me. It’s a really good song.

musicOMH: Roxy Music is to glam what The Sex Pistols are to punk. Who do you think isglam today?
Bryan: Glam is Puff Diddy, Daddy, Duddy, whatever he is – P Diddy. He’s glamorous. All those rappers, they’re the only glamorous people working in music now. The rock bands are rather drab, even the good ones. You definitely don’t want to look at them. But some of those R&B people are very good. And Mary J Blige, she’s got all these fur coats and hats and stuff.

musicOMH: What’s the best moment in your career? This interview?
Bryan: Yeah, this interview… I’m not really sure what it was, the best moment. You always hope it’s to come. I’ve had quite a few moments I’ve liked, so it’s good enough.

musicOMH: Did you really want to be a Tour de France champion?
Bryan:Oh, I used to when I was 15! I was really mad about cycling and racing.

musicOMH: Did you train?
Bryan: Oh yeah, every night. I had beautiful bikes and I was really into it. When I was that age, cycling just seemed so glamorous. I guess the fact it’s very colorful – French, European and Continental.

musicOMH: Are you still into it?
Bryan: No, not at all. But people always remember, especially in France, that I’m interested in it and I get letters about it.

musicOMH: You often refer to the fact that you were born on the same day as TS Eliot. Did you take it as some sort of cosmic sign?
Bryan: Well, yeah. It’s weird, when I started reading Eliot, I really felt incredibly close to some of the things I read. I could feel this. It’s fabulous when you do that, when you discover somebody who you like, when you kind of feel those feelings, even though he articulates them better. He would probably be my favorite poet. Some of it is really beautiful and sad, haunting. Words can be very powerful. I find them very difficult.

musicOMH: Is it difficult for you to write lyrics?
Bryan: God, torture. Absolute torture.

musicOMH: More difficult than writing music?
Bryan: Oh yes, much, because music is just something that comes to you. You don’t question it. I like the fact that music is more abstract. But when you get music and words together, that can be a very powerful thing. But I don’t write so much now, because they’re too painful. So by touring all the time in the last couple of years, I’m just actually escaping from the process of writing, because I can’t write on the road.

musicOMH: But when you do write, what breaks through that difficulty?
Bryan: I don’t feel the compulsion to write like I did when I was starting out. I do feel, however, I gather great satisfaction from performing now, because I’m less nervous than I used to be. I used to be such a shy person. Performing was terrifying.

musicOMH: You were shy?!
Bryan: Oh really, very, and still am. But I feel more confident now. And I start the show now… I just walk out and sit at the piano. I could never have done that 10, 20 years ago.

musicOMH: Do you do anything, like meditate, before a show?
Bryan: Not really, no. But I do like to have peace and quiet for a good hour. People keep out of my way, otherwise I’m going to give them a hard time (laughs). I just get all cranky and strange.