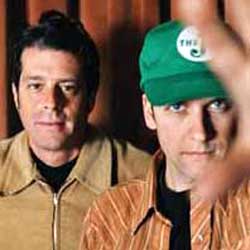 Multi-instrumentalist Joey Burns and his Calexico compadre John Convertino are bordertown Arizona boys with a Mexican Mariachi tinge to their music.

After playing at the prestigious Further Beyond Nashville season at the Barbican, London, last year, they’ve released a new record – Feast Of Wire. But there’s more to these Americans than intricate desert soundscapes. As we discovered when musicOMH met with Joey, politics are somewhere near the top of their agenda…

Originally from Canada by way of Los Angeles, Joey moved to Tucson, Arizona, where the downtown music scene buzzes with the rhythmic Mexican sound of Mariachi. He loves it, but while Calexico’s music has been likened to the soundtrack to a thousand westerns, they offer more than that.

“There’s the influence of synthesisers on songs like Attack El Robot! Attack,” drawls Joey, lucidly. “And on the jazz song Crumble you can hear the jazz aesthetic in the drums. There’s a palette cleanser in the middle of the album – an intermission.”

“There needs to be a war declared – a war on hunger” – Joey Burns, Calexico

“On the first half of the record it focuses more on songs with lyrics, and at The Book And The Canal it kind of morphs back into that soundtrack quality our music has,” he explains.

How do the band decide which songs need lyrics and which are instrumental? “It’s usually me who feels like a song is going to have lyrics,” says Joey.

And for those confused about the kind of music Calexico produce, Joey has a considered explanation at hand. In the UK, “people call it Americana – but a lot of that draws from American roots and we go elsewhere,” says Joey. “Morricone, Latin American, Afro-Peruvian, and contemporary influences – fusing in all those different textures and styles.” Calexican, in fact. He just doesn’t want to be accused of “cowboy lounge” – he’s no cowboy.

But it is the Latin tinge to Calexico’s music that makes their name – itself formed of CALifornia and mEXICO. “The influence of Mariachi came not only from living (in Tucson) but in the studio, where there was a Mariachi band recording,” recalls Joey. “We met some of the musicians and I was inspired to write some songs. “I asked the players to record on it and ever since then we’ve been getting more involved.”

“Back alternative energy sources. It’s a start – we can go from there.” – Joey Burns, Calexico

Joey is obviously proud of his ability to tap into Mariachi – and pleased to know the musicians who make it possible. “We get to learn first hand from these musicians the various styles that make up Mariachi – and they put us on to all sorts of music from Mexico and Latin America,” he enthuses. “A lot of the guys are teachers of Mariachi in schools in Tucson. And the effect of ‘call and response’ affects your listening and perception of what music is,” he continues.

Joey seems very calm and focused, but bubbling just under the surface are opinions of a non-musical nature. Calexico’s gig at London’s Shepherds Bush Empire, the night before this interview, saw Joey welcome us “to the Shepherds… Empire”. He couldn’t bring himself to say the middle word. “I don’t want to be over the top, but the news is unbelieveable,” he says. “Tanks around Heathrow… have you seen the film Bowling For Colombine?”

Joey advises everyone to see Michael Moore’s gun debate film. “It deals with this whole infiltration of fear being fed to everybody through the media. Go see it,” he says. He was delighted with global protests against war in Iraq too. “It gives people the chance to speak out, not only about Iraq but what’s going on globally with corporations. There needs to be a war declared – a war on hunger,” he says passionately.

And Joey has a practical and considered solution to the question of what can one person do about global issues that we might wish to affect. “Make the shift away from our addiction to oil,” he advises. “Whatever we can do to back alternative energy sources. It’s a start – we can go from there. It’s about where you place your business. Where you spend your money in the market is like casting a vote.”