Camille: “Languages are part of music, and the more languages I speak or will sing, the more musical I will be” – Interview 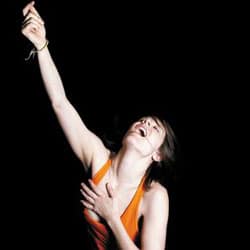 Maybe 2008 is the year that those two perennial ferrets-in-a-sack France and Britain learn to acknowledge their grudging mutual adoration at last. The two countries’ differences are oft-celebrated. But London is the seventh largest French city on Earth, while up to half a million English are now thought to live in France.

Meanwhile, new French president Nicolas Sarkozy and his celebrated new wife, chanteuse and model Carla Bruni, bowled over London’s great and good with a whistlestop tour, generating the sort of fawning headlines rarely offered up for visiting dignatories, let alone those from France.

Now Camille, one of France’s most celebrated recent contemporary musical talents (to label her ‘pop’ wouldn’t do her justice), releases her third album Music Hole with the bulk of the lyrics in English.

We caught up with her in a conference room somewhere in London’s Hammersmith to find out why she’s made the language switch, what she makes of M and Mme Sarkozy’s charm offensive and whether we should get used to a new phrase ‘the French sense of humour’.

In appearance, Paris-born Camille Dalmais proves to be as delightfully French as could be hoped for, with chic square framed spectacles, a green pashmina lavishly draped across her shoulders and effortlessly stylish hair setting off her strong face. As we arrive, she’s chirruping away on a phone in French, her enthusiastic tones carried by her voice’s rising and falling cadences. Her Francophone quiz over with, she turns to face an English language interrogation.

She characterises herself with any number of French stereotypes, succinctly summing up the attitude of some in England to France. She’s self-aware as to how she’s perceived outside of her own country, and runs off some additional French traits. “We criticise a lot, but we like to debate. It’s our pleasure to have a certain distance or irony.”

But she’s also full of views on the English, whom she thinks make fun of themselves more than the French do. “But there are so many different regions that are so distinctive and I only know London really,” she says. No matter – she carries on anyway. “There’s this side, like kind of uptight, pinching without laughing, like you say something funny but you don’t laugh. Dry humour.” Our national trait – a type of humour the rest of Europe struggles to get. Anything else? “There’s the Queen, and there’s the psychedelic, Monty Python sort of thing, and the rugby supporter, or fan, who’s more into beer.” By way of explanation of such a character, she does an impression – with a sound that suggests an Old Etonian coughing up a hairball.

A man going by the name of MaJiKer produced her current album and its Prix Constantin-nominated predecessor Le Fil. He’s English. “He spoke very precise, he’s very organised, but I call it psychedelic because he’s so imaginative and funny,” she sums up. As a French lady working with an English man, has she been able to divine why the French and English have quarreled so often down the ages? “French people have trouble to understand (that ‘dry humour’). You (can) either (be) serious or humourous, but you can’t be both.”

Moving from the people to their language, Camille has revealed that she liked English for its dipthongs and vowel sounds. But did she also want to use English as a tool to reach a wider audience? “I don’t think it’s as simple as that,” she counters. “Most of my albums have been sold in France, and I’m not sure French people will accept me singing in English, and they’re very touchy on that. (But) I’ve never felt it was an obstacle – when I sing French in concerts, it was never a problem to English people. It’s more of a challenge than just to reach a wider audience. I’ve started writing in English but I have no idea how it’s going to sound to an English ear. To me it’s like I’m taking a great risk, but I like that.”

Yet she doesn’t feel she needs permission from France or Britain to write material in English. “I speak English, a big part of my culture is English, the first songs I listened to were Anglo-Saxon, like many people, I guess. I know English enough to write songs. I wasn’t sure but I kind of managed to put these songs together.” She shrugs, Frenchly. “I guess I’m European; partly French, partly everything.”

Music Hole’s mix of bodyslapping percussion, scatty loops and minimalist instrumentation is a clear evolution from Le Fil, a record that has to date shifted some half a million copies. There’s more variety, with chansons giving way to dramatic soundtrack material and all of it punctuated by the lively standout upbeat tracks Money Note, Gospel With No Lord and Cats And Dogs. The latter comes replete with an entire menagerie of animal noises. It’s difficult to imagine the English, or the French, not loving it, though pet owners might disagree with the line “Cats and dogs, they’re not our friends, they just pretend”.

Is she a cat person or a dog person? “I’m both,” she says, but not in terms of whether she’d prefer one over the other as a pet. The unexpected explanation goes thus: “If you can sing a cat or a dog, then you can sing anything. One is like” – she roars and barks an approximation of a dog – “and the other one is like” – she squeaks and meaows like a kitten. On the record she stretches to goats and donkeys.

Ultimately all this seems to be about experimenting with sound. “Languages are part of music, and the more languages I speak or will sing, the more musical I will be,” she says. “It’s an exploration, inside of me. When you speak two or three languages it’s like there’s a different territory inside of you that you’re exploring. And then there’s the territory of the outside. I have a project around religious music where I explore different languages, but for the sounds more than I mean what I’m singing.

“If you want to understand the music of the world you must first understand the language, the geography of what’s around… the language is the result of the culture of the place, the state of mind, the spirituality and then music derives from that.” She pauses and grins mischieviously. “Even talking drums.”

Music Hole’s lead single Gospel With No Lord introduces us to American divas who claim they received their vocal talents from the Lord, their relatives… their hamster-in-laws, even. And on Music Note she references Celine Dion, Dolly Parton and Mariah Carey. I suggest that it seems she sends them up, or puts them down, or however she wishes to phrase it. “You think I take them down?” she gasps. “Oh I really love those singers, I really admire them. I would be a hypocrite if I said I didn’t like those singers and I was just making fun of them.”

So she’s not making fun of them? “I’m making fun more of that musical culture that derives from American culture and American language. I put on an American accent on that track because I couldn’t help it. If I wanted to incarnate the character of the girl who wanted to make it out there and hit the money note higher than Mariah (in Money Note) I had to…” and she squeals, by way of example. “It’s part of the American culture that is both obscene and fascinating, that money is really part of the artistic and musical culture. Their culture is based on adventurous capitalism and there’s a whole spirituality around money. I feel empathy but at the same time I feel distance, because I’m not a gospel singer. I’m not a diva.”

But is she, though? Dropping her surname might suggest so. “Ah, well, I’m kind of a diva sometimes, once in a while,” she laughs, relenting. “I didn’t feel like having a pseudonym or giving my whole name away, as I feel it’s part of my civil identity, my family, my genealogy. I like my name. It’s a quite open name.” She thinks. “A stage name.”

If the whole of American culture is based on money, the French, on the other hand, “are still very aristocratic. We never mention money.” What about France’s new right-wing president M Sarkozy? Characterised as ‘the bling-bling president’, aren’t he and his Anglo-Saxon economic policies anathema? “Oh that’s not the worst thing he does,” she confides. “For that, Sarkozy is seen as someone quite vulgar, among other things.” Are he and his wife good for France? “I don’t want to talk about that. I’m not a tabloid person.”

The name that most often pops up in reviews of Camille by way of musical comparison is not Mariah, Celine or Whitney. It is Björk, particularly for her a capella album Medullah. Music Hole, says Camille, was “mixed in Iceland by an elf”. Is she a fan of Björk? “Yes, I love her. I’ve been to Iceland and I’ve understood a lot about her music and that culture. They’re very related to their land and their fairytales and they’re a very close community. There’s no showbusiness or fuss around music. It’s made for pleasure as a craft and I love that.”

The crafted product that is Music Hole has a cover shot of Camille in iconic diva pose against a black backdrop. She explains the sleeve thus: “We’ve always used our bodies to mix dance and music and theatre, and I feel that Music Hole is more ancient than 20th century music hall. (There’s a) reference to the pop star, the diva, but I don’t have a microphone, I’m doing that” – she clicks her fingers – “body percussions. The hole is the mouth, open to receive music from outside.” Just as I’m digesting all this, she adds, “The typography is Motown ’60s style.”

Our too-short time together rushes all too soon to its end, and at least 10 questions sit unasked. But I want to know what she makes of France breaking with tradition and picking a credible musician, Sébastien Tellier, to compete in this year’s Eurovision Song Contest. Does she fancy his chances? “Oh, yeh!” she squeaks delightedly; Tellier’s keyboardist, it transpires, is Camille’s brother. “I’m very very proud!” she laughs. And as Music Hole finds its way to her audience, the inimitable Camille has every reason to be.

• Camille’s Music Hole is released through Charisma/EMI on 7th April 2008. Camille plays London’s KOKO on 14th May 2008. Tour dates and further information can be found here.