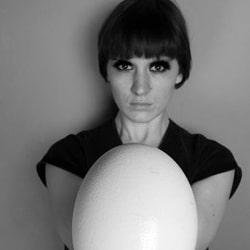 Cate Le Bon’s love of the Welsh outdoors has already been made clear by the fact that she works on a farm, but it still comes as something of a surprise to discover that she has elected to take our interview call while doing the gardening. This almost backfires immediately, as we discover from her manager what she’s doing before she knows we’re on the line. So after surprising her with the ‘I know what you’re doing’ line, a quick assurance has to follow that none of this behaviour is in any way stalkerish. That established, she settles down to talk us through her second album, the unusually titled CYRK.

‘Cyrk’ is the Polish word for circus. So how did it make the graduation to album title? “It was influenced by the Isle of Eigg,” she says a little elusively. “When I was recording the album the label I was on before hadn’t worked out, and it had folded. I’d had so much fun but then the nitty gritty, administrative side of the music industry left me feeling despondent. At that time I’d gotten in to the Polish art movement, with those abstract, psychedelic, brightly lit posters. They advertised the circus as an entity, but not anyone in particular. I loved the idea that the picture was enough, and the idea of doing something because you love it. It reminded me to screw the detail!”

The artwork does not attempt to emulate the colourful circus posters, mind. “Yeah, I decided there was little point in trying to rip off one of the posters. It’s not about that. It’s a nice homage to the posters, but darker.”

Le Bon’s new home is the Ovni label, headed by sometime Super Furry Animals singer and friend Gruff Rhys. Is it fair to assume he’s pretty relaxed about things where the label is concerned? “Yeah,” she says affectionately, “which is sweet really. He’s got incredible ideas, and never a sense that something isn’t possible. He’s about trying anything!”

Le Bon’s music can be strangely elusive, and we are curious to discover what the recording conditions were for CYRK, being as it is a blend of intimacy and a more confident, outward going approach than the first album. “I think it was quite a natural progression from Me Oh My,” she muses. “A lot of these songs were me on a guitar for my own pleasure, so there was no intent to record them until later on, until I got back from working with the Furries. The process was building around what was there. Then I went on tour with my band, and I got more confident as a musician. When he listened to it Gruff was saying ‘there’s nothing wrong in it’, so I wasn’t worried if it was technically good or right. It was then a case of progressing to where the instrumentation is.”

The album’s title track has a curious, syncopated organ sound, and the saxophone appears in its more fractured closing passages. Has she been more experimental where instruments are concerned on this record, and is that something she wants to pursue further? “It happened through making recording with a good friend of mine, Krissie Jenkins,” she says, giving credit where it’s due. “He had access to a lot of equipment, and had a lot of synth pedals that we used. We also found the deepest, scariest percussion box that we delved in to.”

“I need someone who doesn’t disapprove, who says, ‘Keep it up, that’s really great'” – Cate Le Bon

Recording was ‘of the moment’. “I always record in short stints, so you have to draw a line under it. The saxophone at the end of that track, we’re not sure who’s playing it – it’s either myself or Steve Black who’s playing it. I asked for some disgusting jazzy impro, so he looked at me and did some, and then I gave it a go with some horrific results, so he has told me not to credit him.”

Of her working relationships she is candid. “The last two albums have been with Krissie because I love working with him,” she explains. “I don’t find him intimidating. I need someone who doesn’t disapprove, who says, ‘Keep it up, that’s really great’. That’s the intimacy that comes across, and we put the bare bones down quickly so the excitement is still instilled, because we’re trying to have fun.”

Cate and her band are not long back from a lengthy US tour, which appears to have left its mark. “I was out there touring with St Vincent, and then we went out again in February which was a very different tour. I was able to take my band out; it was brilliant – fun and easy going. Everyone was on the same page, and we got up early and went for long walks to the mountains. I’ve been on soul destroying tours, but that one was rather special.”

There was one particular highlight that Le Bon recalls vividly. “Between the East and West coast, we had a four day drive from Minneapolis to Seattle. There were the mildest winters there, so we drove to The Rockies in a day, and we stayed in a log cabin in the snow, running around drinking beer and trying to stalk the animals. There isn’t anywhere quite like The Rockies in Wales, that’s for certain!”

Her home country still exerts a powerful grip, and Le Bon wants to keep talking and singing in her home language where possible. “On a personal level Welsh is extremely important to me. I speak it as well as I do English, it’s a beautiful language and I would want to bring my children up speaking it, if I have children. It can sound quite floral if it’s in the wrong hands, though.” On Welsh influences, she of course cites her label boss and friend. “I like Gruff and think he is an incredibly talented Welsh lyricist, but the band I absolutely love is Datblygu, who were a John Peel favourite, and recorded the most John Peel sessions. I find their Welsh lyrics are mind blowing. I find it quite difficult to translate from English to Welsh so I shy away from writing in Welsh, which is something I should address. I’m fortunate to have another tongue that sounds different.”

Homesickness appears not to be a problem though, even when on extended breaks in the The Rockies snow. “I suppose that’s the great thing,” she says, “you can go away for extended amounts of time but it’s not as scary as going off indefinitely. I always go west to this place when I come back though!”

Cate Le Bon’s CYRK is out now through Ovni. She tours the UK in May with Perfume Genius, arriving at London’s St Pancras Old Church on 10th May. More at catelebon.com