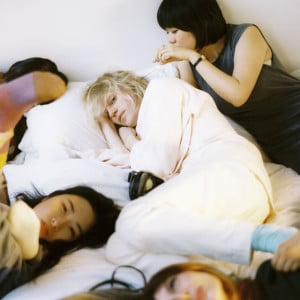 When he was forced to sleep rough in Hyde Park after arriving homeless in London from his native New Zealand, Connan Mockasin admits a career in music seemed a long way off. But now it’s a reality, thanks to the runaway success of his quirky debut Forever Dolphin Love – an album he recorded in a tent in his parents’ front garden in the small coastal town of Te Awanga – and the lustrous freaky soul of last year’s Caramel.

Operating in the same self-determined vein as Todd Rundgren, 30-year-old Mockasin makes beautiful, off-kilter music that subverts as it compels, challenges as it mesmerises and startles as it seduces in its wide-eyed, childlike exploration into the final frontiers of pop music.

Forever Dolphin Love turned heads because of its disarming pop charm. And it’s an unlikely and weird listen, which reflected its bizarre origin. “I had a few machines and a microphone. I was already sleeping outside in a tent in my parent’s front yard because it was so hot. So I just recorded it in the tent,” Connan says in his trademark unassuming modesty. “All of the songs were recorded chronologically. Like a mixtape. I just played whatever song or sound I wanted to hear next in the mix. And when I got to 36 minutes I stopped. It seemed the right amount of music.”

Those 36 minutes of music became his 2011 album, which found an unlikely champion in producer Erol Alkan. Mockasin followed it up last year with Caramel, a mind-boggling record which can initially seem like a piss-take during the first listen. Or even its second. Delve a bit deeper, and it’s actually quite a fitting album for the oddball now-Manchester-based musician as he follows his instincts, once again, into the corner where R’n’B, funk and Eighties pop – as well as bad moustaches – went to die.

And this is precisely where Mockasin decided to pitch his next musical tent. “Maybe Caramel is a little bit soul,” Mockasin muses. “Maybe it comes a smidge more from hip hop, which to me sounds much fresher than what’s called ‘indie’. Sometimes I’m ashamed to be in a band, or a musician, at this point in time. I moved to London in 2006 because people back home didn’t really understand what I was doing. It just wasn’t really my thing. I was itching to get out.” Do they understand now? “Well, when I play live people seem to know the songs and lyrics better than I do,” he adds with a laugh. “That’s a nice feeling.”

How fans will fare with helium-induced sex funk of I’m The Man, That Will Find You is another challenge. Or the impressively-titled Unicorn In A Uniform, for that matter. And for a chap who created the cover art for his debut album by constructing a life-size puppet of himself – complete with strands of his own hair – it’s safe to say that concertgoers should always remember to expect the unexpected. His former neighbours in Shoreditch certainly learned this lesson the hard way. After his debut was released he decided to throw a party – by playing a concert in his tiny flat. “About 30 people came around to listen,” he says. “It was pretty basic. But it was fun.”

Call him a troublemaker, pisstaker or noisemaker, it won’t bother Mockasin much. He just wants to make music – and always has. Luckily, it was his mum who encouraged him to finally press record as a solo artist: “I wasn’t doing much in London or New Zealand and my band I was in wasn’t going anywhere. I had stopped playing music, really. But my mum told me to make my own record and not to rely on anyone else to help me. So I did,” he recalls. And luckily for all of us, Connan Mockasin has never looked back.

Connan Mockasin’s album Caramel is out now through Because. He plays at Brighton’s The Haunt on 25 January and rounds off his current UK tour at London’s Shepherd’s Bush Empire on 28 January 2014. More at facebook.com/connanmockasin