Corinne Bailey Rae: “I’m so wary of thinking ‘I’ve made it'” – Interview 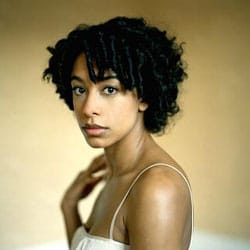 Corinne Bailey Rae. Leeds lass, founder of a band by the name of Helen (sank without trace), signed to EMI. Kaboom. Her debut album goes straight to the top of the UK album chart. What is it about this singer-songwriter that has precipitated adulation from journos and her musician peers alike? What does she make of being swept up so abruptly in a media maelstrom? And what about her music – is it really as special as the hype insists?

Her voice has been compared to everyone from Billie Holiday through Macy Gray and Erykah Badu to Norah Jones. Corinne Bailey Rae thinks her sound is closer to that of Martina Topley-Bird. And she’s not keen on being pigeonholed as coffee table chic alongside jazz-soul waifs.

“The thing I like about this record is, there are some songs that would be quite comfortable under an indie banner, like Choux Pastry Heart,” says Corinne in broad Yorkshire tones, “or even Like A Star. But then there are songs that are more influenced by soul music, and some that are a bit more unusual, kooky, jazzy.”

Born the eldest of three daughters to an English mother and West Indian father, the singer-songwriter has been honing her songs first in a band format and now as a solo artist with co-writers and backing musicians that include her husband. She topped the BBC News Sound of 2006 industry poll, has been eulogised by Jools Holland and any number of radio stations, newspapers and magazines.

In March she heads to the massive SXSW music festival in Austin, Texas, to capitalise on an American music market currently in thrall to a Brit for the first time in a decade – James Blunt. His ubiquitous You’re Beautiful topped the Billboard singles chart, and Bailey Rae will be hoping that her loved-up sentiments strike similar chords. All the signs are she’ll do well. “I like the fact that the songs all fit into different places,” she states, sounding confident of her product.

Her debut album’s lead single Like A Star has reportedly been enjoying much US radio airplay. “Like A Star is special to me as I wrote it on my own,” she recalls. “I was sitting in my room and playing about with some jazz chords that I’d learned, and most of the words to that song just came to me then.”

In the UK her second single Put Your Records On was only held off the top of the singles chart by Madonna‘s Sorry. A week later, the album would stride straight in at number one.

But despite appearances to the contrary, all this did not happen overnight. Bailey Rae’s musicianship began at church a decade ago. “I was really influenced by going to church when I was growing up. There was a big youth group, after school stuff… people were really into music and talking about the world, and politics.”

Her upbringing has been carried forth to the debut album. “Spirituality is somewhere in there,” she says. “The last song on the record (Seasons Change) is about kinship, peace and hope and all those things. And there are a few biblical references in Like A Star. But I don’t think these songs would be seen as preachy.”

Rather than preaching, Bailey Rae is more concerned with giving out positive vibes. “I’d like to think the music can affect people in a positive way. A song like Put Your Records On, I feel like I’m singing that back to a younger version of me, getting 10-year-old girls to have confidence to not fit in with the crowd, and finding an identity in music,” she says, “not being afraid to look different to other people, or think different.” Bailey Rae comes across as someone who could easily have been an excellent teacher – her manner is easy and confident, but never condescending. “I’ve got a real heart for young people. I always think of what I was like as a teenager,” she says.

When it comes to meeting her public on the live circuit, Bailey Rae is still getting used to things. To her the likes of London’s Dingwalls venue is “still pretty big”. She tells of playing to audiences of 80 or 90 at her first London performances. By the conclusion of her spring tour will have played to thousands.

“For me getting to play in front of 300 or 400 people is a big thing, that they’ve all turned out to see me. I’m still amazed that people have even heard of me. I don’t feel remotely famous or well known,” she says. “Responses at gigs for me have been really good. The crowd’s been really diverse – I’ve seen a lot of student types, older people, teenagers, black guys, girls, all different types of people.

“It’s amazing, and I’d always like it to be that way. I wouldn’t want it to be an uber-cool, nichey audience, very cyncial and only wants to hear a certain kind of music. I’d like to think the songs are kinda stories, and I’d hope lots of people relate to them. Some people bring their parents and I just think, why not?”

“I think great art can be made out of all different emotions.” – Corinne Bailey Rae

Already her songs have been dutifully learned by her burgeoning fan base. “When I did a gig at HMV there were girls in the front row who knew the words to Like A Star and Put Your Records On. That was really great.”

Her success has happened so suddenly that she wasn’t even at this year’s Brits. “I’d have really liked to go to the Brits but all the tickets had been given out and there was nothing for me,” she laments. In fact, “nothing particularly showbiz has happened to me yet.” She neglects to mention that she already knows Kaiser Chiefs – her band Helen and Ricky Wilson’s formative rioters were both out of Leeds and played some of the same gig venues.

With the internet purportedly such a big influence in breaking acts like the Chiefs and fellow Yorkshiremen Arctic Monkeys, is signing to a major label (EMI) the way to win hearts and minds? “I’m really happy it’s going out on a major label,” says Bailey Rae. “(If I hadn’t,) I would have carried on writing, and I would have released an album, but not many people would have heard it. There’s a difference to going round shops and putting out 10 copies of your record on the shelves and having your own website that no-one goes on, on MySpace or whatever, and going to HMV and seeing rows and rows of (my records). I’m just about taking it in.”

She’s not complaining about the relative security her major label deal brings either. “When I finished university I was just working in a restaurant, and behind a bar, but I’d already sussed out I was a musician. I’d always believed myself to be a musician. I’m lucky that the music has been put to so many people. When I was coming through my late teens, just having a website was a pretty big deal.”

As for MySpace, the runaway music community site on which everyone can have their own profiles, Bailey Rae is quick to point out that her label don’t run her page. “My MySpace site is run by a guy I used to work with at a club,” says Bailey Rae. “I have a forum at my own website as well, and I go in there sometimes.” Does she respond to the messages in person? “I get too tied up with other people’s opinions. I’d like to save a bit of independent space in my brain for what I think, and then you can’t blame other people if you push in one direction and it doesn’t work, and you can’t get too depressed if someone says something negative about the music.”

“I’d like to save a bit of independent space in my brain for what I think.” – Corinne Bailey Rae

People would never achieve success in their chosen field at all if they answered every email and message, of course. Life’s too short. Bailey Rae agrees. “If you respond once then maybe people will always expect you to be at the other end of a computer. And I have read negative things and let it bother me, but you appreciate not everyone’s going to like it.”

Another aspect of success that’s new to her is touring internationally. “You might be in Milan for two days,” she recounts. “One of the days is a gig and the other day you’ve got to see everybody you can see. Some of that’s pretty intense. But that’s the nature of trying to let people know you have music out!”

She doesn’t sound bored of it yet. “It’s amazing having a job like this where you can just dream up ideas and they become real,” she says. “I remember when I was shooting a video in South Africa and I just stopped, looked round and thought, ‘How did I get here?’ It was just because I had some ideas. Imagination becomes reality – it still amazes me. Dreaming is real, it’s not just an airy fairy thing, it makes things happen.”

Corinne Bailey Rae is living her dream, but she’s not taking it for granted. “I’m so wary of thinking ‘I’ve made it’, even though a lot of different journalists have liked it,” she said before her chart success. Hoping for the best, expecting the worst, Corinne Bailey Rae is just Like A Star, but with her feet firmly on the ground. And for 2006 she shows every sign of making it.

Corinne Bailey Rae’s Like A Star is out now through through EMI. Tour dates and further information can be found here.