Damon Albarn: “I felt that was missing the point of using me, a musician” – Interview 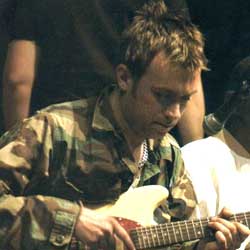 Prior to the phenomenon that was Gorillaz, Essex boy Damon Albarn was of course best known as Blur‘s front man – and for having arguments with Oasis.

But when Gorillaz appeared, featuring rap, dub and Buena Vista Social Club‘s octogenarian front man Ibrahim Ferrer, and all within the device of a cartoon band, the world sat up, took notice and bought the record by the six-million. But Albarn’s 2-D side project already had precedent.

Soundtrack collaborations with Michael Nyman for Ravenous and Einar Örn Benediktsson for 101 Reykjavik had already suggested Albarn’s willingness to experiment with music of different genres and regions. We caught up with Damon for a natter about his most ambitious side project yet – Mali Music.

“It was quite a random thing,” he says, picking up the story. “I was approached by Oxfam to go to Mali as their ambassador and get involved in their various initiatives out there. But I felt that was missing the point of using me, a musician. I’m not really one of those people who believes that if you’re a musician you can just leave that behind and start getting into politics,” he explains. “So I went back to them and said that I’d rather go and meet the musicians and see if there is some kind of common link that I could develop something from.”

Oxfam set up chances for Albarn to meet and play with Malian musicians and the experience worked. “I just listened and talked and occasionally joined in with my melodica,” he says, sounding rather proud.

“I played it on the last few albums I’ve made and it’s just become my instrument of choice. In the context of Mali music it worked really well. It’s a very simple instrument and it sonically fits in, for some reason.”

“I made this record off my own back, so it’s an important record for me personally…” – Damon Albarn

Armed with a DAT tape, he recorded his collaborations in Mali and returned to his London studio with over 40 hours of music. “I spent two years figuring out how I could turn it into something that would satisfy me as a musician but also make some kind of cross-cultural link,” he says.

One of the people he asked the advice of was World Circuit’s Nick Gold, who listened to the album and suggested more vocals were needed. “But I hadn’t wanted vocals on it because I didn’t understand what anyone was singing about!” he reasons. “I didn’t want to sample vocals just because they were fun. I wanted them to make sense.”

The answer lay in Malian music master Afel Bocoum. “I didn’t meet him in Mali the first time I was there,” recalls Albarn. “He got involved with it when it was sent back to Mali and was given carte blanche to add vocals and violin.”

The final result, simply entitled Mali Music, is released on Honest Jons, a new label set up by Albarn and two men he calls his “mentors”. “I wouldn’t have got into Mali music in the first place without the encouragement of Mark and Alan at Honest Jons (a London record shop). To me it made perfect sense – a good record shop should be able to put out good records. It’s a bit like what Rough Trade was in its early days.”

Signing world artists to a label is, for Albarn, a process that other labels haven’t been getting right. He wants Honest Jons to change this.

“When you’re doing a deal with someone in the southern Sahara, it’s a very different way of doing business than in London. You can’t sign them in the usual way because they’d end up getting ripped off, which would defeat the object of setting up a label like this.”

I wondered if Honest Jons would only be signing world music artists. Albarn sets me straight. “It isn’t a world music label. Music we sign just has to appeal to our three-way sensibility for us to give it a go. If we get sent stuff we’d listen to it, but our A&R brief is quite vague.”

When quizzed why he didn’t just sign up the Malian artists to Honest Jons in their own right, rather than involve himself in the music, he is keen to defend his role in creating Mali Music.

“I made this record off my own back, so it’s an important record for me personally. I feel that I kind of at least touched on the possibilities of cross-cultural music, but it is a lifetime’s work and I don’t profess to be anything other than a novice at it.”

“I’d love Liam Gallagher to be on the next Gorillaz record, but let’s wait and see how his band does in the next 12 months. I’m sure he’ll be alright on his own…” – Damon Albarn

“But if you’re going to promote African artists then there needs to be an impetus – and that’s what this record has been, I think.”

After touring behind a film screen with Gorillaz, I wondered if he was relishing the experience of playing live again. “Oh, it’s fantastic,” he enthuses. “I was getting very frustrated behind that screen!”

“The whole period has taught me that I enjoy being part of an ensemble rather than just a front man. Don’t get me wrong – I enjoy that too, but I get more enjoyment out of really listening to everyone,” he continues, “but as a front man, that side of being a musician is lost to you because you are so involved with the audience – and it’s a bit lonely sometimes.”

I’d wondered if we were to see more of Mali Music on tour to support the album. Damon tells me he’s doing Later… with Jools Holland show on BBC2 and has been offered a few of the big festivals. “But it isn’t easy to tour when half the band live in West Africa!” he points out, not altogether unreasonably. “Everything has to be planned really methodically – and working in African time is a bit difficult…”

And what of the cost of setting up a label and bringing in musicians from Africa for a tour? Damon chuckles. “Everything I do now runs at a loss! I haven’t been in a profit making situation for years, believe it or not. Touring Gorillaz is totally unrealistic and all the proceeds from Mali Music go back to Mali, so I may have to go back to my day job soon.”

But doesn’t he need to relax from all these projects? Doesn’t it all get to be too much for him sometimes? “I’m fairly relaxed. I used to be very uptight as a 20-year-old, but since I’ve had a kid maybe the constant exhaustion keeps you relaxed because you just can’t do anything else.”

Throughout the interview, said “kid” has been gurgling in the background and generally making her presence known. Albarn assumes the mantle of the proud father.

“The things that make me happy most are my family and working. Going out is not necessarily the route to happiness! I thought that the day she was born I’d become a responsible adult, but that’s taken longer than I’d anticipated! I’m sort of getting there, two and a half years later…”

Aside from music, Albarn also featured in the film Face, with Ray Winstone. What of his acting career? “I spoke to Ray a couple of nights ago and we promised, yet again, to meet up and talk about things. But with acting I’m a bit of a coward really and I’d only really do it with mates. If it’s on a professional level then I can’t really – I’m not really committed enough to do it properly.”

What of the talk that he’d be happy for Oasis’ Liam Gallagher to be involved in the next Gorillaz album? Is the famously loudmouthed Mancunian now a mate too?

This time round, Albarn is happy to be cheekily political. “Me and Liam have never had anything other than a…. laugh together. I’d love him to be on the next Gorillaz record, but let’s wait and see how his band does in the next 12 months. I’m sure he’ll be alright on his own and he doesn’t really need me…”

And how does Mali Music influence the future direction of Gorillaz?

“Gorillaz isn’t really a band any more. We’re making a full-length feature film, so the next bit of Gorillaz music will be a film score rather than a pop record. And that could be all over the place – people like Afel could be involved in that. That’s the whole point. Get people together in surprising circumstances.”

As for Blur, with their new album due to be completed next month, I was interested to know what effect Albarn’s musical travels have had on the band and their music. “I made this album (Mali Music) in the middle of last year, so it’s already in my vocabulary. I think the new Blur album benefited from my contribution as a result.”

Although the new Blur album is due soon, he doesn’t know whether it’ll come out this year. “I’ve spent the last two and a half years touring and promoting and it would just be nice to have some proper time off.”

With regard to what the rest of Blur think of his side projects, he is noticeably coy. “I presume that they’re cool about it – I would hope so. But it’s up to them to fill their time constructively. A long time ago I abandoned the notion that everything had to be done within the strict format of four people who grew up together.”

Rumours have been circulating that Fatboy Slim was producing the next Blur record – but Albarn sets me straight. “Norman might do a couple of mixes when it’s done, but I don’t really use producers until the last ten percent of records. I never really finish things off, so that works really well for me. I have too many ideas and they need to be rationalised and ordered, but we don’t really need people to hold our hands when we’re recording music.”

For someone with a musical career as fascinatingly varied and successful as his, nobody could reasonably argue that Damon Albarn needs to be shown the way.

Mali Music is out now through Honest Jons. A shortened version of this interview, which was first published in 2002, appears on the BBC News website.